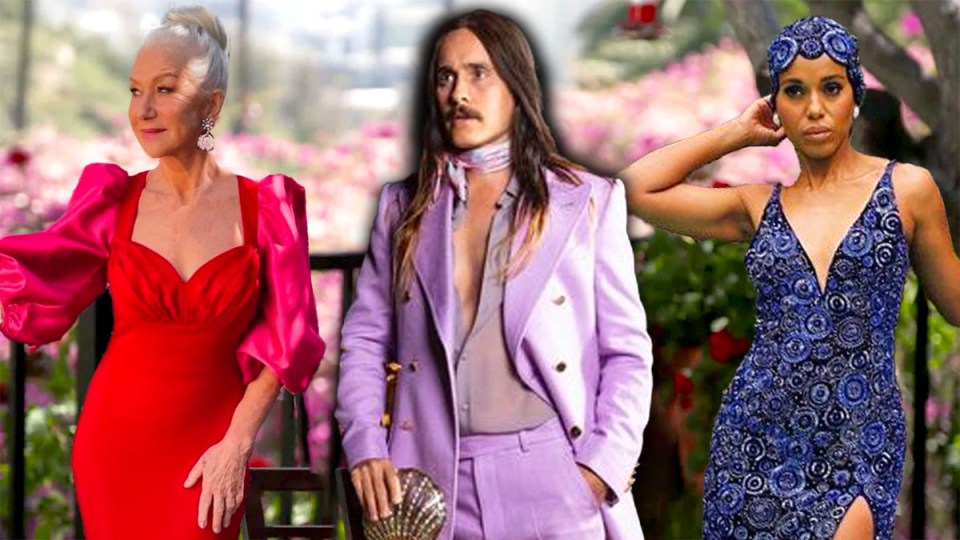 SAG style: The best and worst dressed at this year's ceremony Photo: Instagram/Twitter/TND

Your favourite actors stepped out (or stayed in) in style at the 27th annual Screen Actors Guild Awards, where timeless, old-Hollywood glamour was the order of the night.

The hour-long, pre-taped event aired on Monday morning (local time) and went hostless for the second year in a row.

Like always, the ceremony kicked off with some of the world’s most renowned stars relaying funny and relatable anecdotes from when they were significantly less successful.

More funny and slightly less relatable was Helen Mirren fondly reminiscing of a time when she had to lie on her resume about her horse-riding abilities.

Catherine O’Hara, who has cleaned up this awards season, continued her streak and picked up yet another award for her critically acclaimed performance as Moira Rose on Schitt’s Creek.

The Canadian comedy also went on to win outstanding performance by an ensemble in a Comedy Series.

Minari’s Yuh-Jung Youn, who was shocked by her win for outstanding performance by a female actor in a supporting role, delivered one of the most heartwarming acceptance speeches of the ceremony.

“I don’t know how to describe my feelings, I’m being recognised by Westerners. Oh, it is very, very honoured,” Youn said.

“Especially by my actor fellow, choose me as a supporting actress. I don’t know. Am I saying right? My English is not good?”

And while the winners should give us a clear indication of what the Oscars have in store for us, it’s the fashion that had every talking.

Brightly coloured frocks and extravagant gowns were a staple on the red carpet, even though most of the dolled-up A-listers Zoomed in from the safety and comfort of their homes.

Dominating this year were a number of buttery, creamy neutrals and classic cuts that are sure to set the tone for the rest of the season.

The men’s stylists for this year’s SAGs all received the same memo informing them that oversized, nostalgic suits were in.

Some actors, like Daniel “cream dream” Levy nailed the look, while others fell slightly short.

The Queen’s Gambit star Anya Taylor-Joy has the kind of face that could make a hessian sack look high fashion.

While her nude and lace Vera Wang gown elegantly toed the line between sultry and sweet, it could have been more memorable.

Cynthia Erivo was the belle of the ball in her nude Alexander McQueen gown.

The timelessly feminine, fitted bodice is perfectly contrasted by her signature shaved head and romper-stomper boots.

Ervio should wear this dress forever.

Lily Collins may or may not have stolen this sickly sweet, bedazzled, collared dress off the set of Emily In Paris. She should put it back.

Exciting, bright and over the top, Smollett’s winning look was everything that Kaley Cuoco’s gown could have been, but failed.

Cuoco’s Pinterest mood-board for this look was almost definitely comprised of Smollett’s gown and some enormous ruched flowers from the Spotlight craft aisle.

While her graceful up ‘do and matching hot pink lip are classically feminine, pretty much everything about the look is drowned out by the loudness of this dress.

Speaking of outfits that could have been, Dead To Me’s Sam McCarthy was shooting for Daniel Levy stylishness, but fell short somewhere between Top Cat gangster and dressing up in something he found at the back of his dad’s closet.

Oversized is in, but swimming in a suit borders on the ridiculous.

Maybe designer Maria Grazia Chiuri had this in niche concept in mind when she created the frock for Dior, or maybe she just really liked The Queen’s Gambit.

Kerry Washington did not come to play.

While vaguely reminiscent of Rihanna’s Swarovski-covered mesh dress from the 2014 CFDAs, this Etro dress and matching headpiece served us “mermaid vibes, always”.

This is what you would wear if you were a part-time jazz singer, part-time synchronised swimmer.

Daniel Kaluuya, who won for his performance in Judas and the Black Messiah, proved that pyjama fashion has the ability to follow us out of lockdown.

This Louis Vuitton suit is a staple around the nursing home, but your grandpa probably scored a better deal.

Jared Leto continued the 1970s suit trend that found success in Harry Styles and Bruno Mars at this year’s Grammys.

Leto’s custom-made, lilac Gucci ensemble is effortlessly cool and finds a perfect balance between his masculine and feminine energy.

Helen Mirren is no stranger to killer, red carpet glamour.

This year, Mirren wore not one, but two dresses. Her striking Michael Kors gown lived up to our expectations, but it was her pink and red, colour-blocked dress by Badgley Mischka that proved the 75-year-old is in it to win it.

Coming off his high-ly bizarre appearance at the Golden Globes, Jason Sudeikis ditched the tie-dye hoodie for a strong feminist message.

He earns a few points for the pro-feminist attire, but he also loses a few for the lack of effort.

Viola Davis may have snagged a SAG award for her phenomenal performance in Ma Rainey’s Black Bottom, but that’s about all she is winning.

This high-vis Lous Vuitton was a faux pas from the usually-stylish Davis.

Paired with a blunt bob, her stylist should be fired for dressing her up like a Stabilo Boss highlighter.

If Cate Blanchett’s menswear-style suit doesn’t have you swooning, there might be something wrong with you.

Paired with sexy, red lips and open-toed black heels, Blanchett can do ‘cool gangster’ better than the best of them (and certainly better than Sam McCarthy).

Stylish standouts and fashion faux pas at the 2021 SAG awards