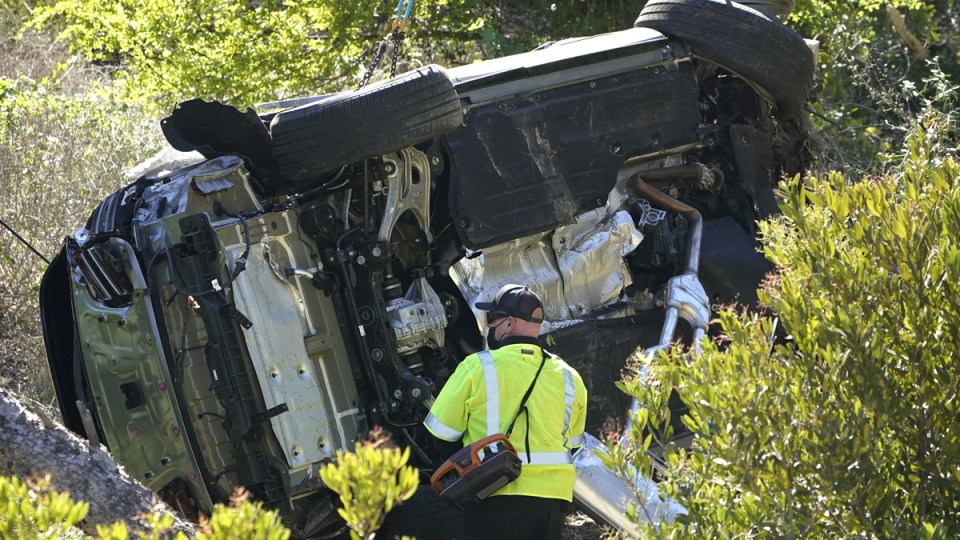 Tiger Woods suffered serious leg injuries when his four-wheel-drive ran of the road in a Los Angeles suburb in February. Photo: Getty

Los Angeles police have determined the cause of the single-vehicle accident that left Tiger Woods seriously injured, but say they won’t reveal it it because of privacy concerns for the golf superstar.

Woods suffered serious injuries to his legs in the February 23 crash when he struck a raised median strip, while driving alone just outside Los Angeles.

His Genesis four-wheel-drive crossed through two oncoming lanes before leaving the road and uprooting a tree as it plunged downhill from a stretch of road that police said was known for wrecks.

Woods is in Florida recovering from multiple surgeries, to insert a rod in his right tibia, with additional screws and pins inserted into bones in his foot and ankle.

Los Angeles County Sheriff Alex Villanueva has been criticised for his early comments about the crash. He called it “purely an accident” and said there was no evidence of impairment.

Investigators did not seek a search warrant for Woods’ blood samples, which could be screened for drugs and alcohol.

In 2017, Woods checked himself into a clinic for help in dealing with prescription drug medication after a DUI charge in his home state of Florida.

Detectives, however, did obtain a search warrant for the data recorder of the 2021 Genesis GV80 SUV, known as a black box.

Mr Villanueva would not say on Wednesday (local time) what data had been found in the black box.

“A cause has been determined, the investigation has concluded,” he said in response to a question from The Associated Press.

It still remains an accident.

“Nothing has changed on what we learned from the course of the investigation,” Mr Villanueva said.

“Everything we did turned out to be accurate.”

He claimed investigators need permission from Woods to release information about the crash.

“We have all the contents of the black box, we’ve got everything,” Mr Villanueva said.

“It’s completed, signed, sealed and delivered. However, we can’t release it without the permission of the people involved in the collision.”

Woods’ agent at Excel Sports, Mark Steinberg, did not immediately respond to an email.

Woods is from the Los Angeles area and was back home to host his PGA tournament, the Genesis Invitational at Riviera Country Club, which ended two days before the crash.

He was driving an 4WD loaned to him by the tournament.

Woods has never gone an entire year without playing, dating back to his first PGA Tour event as a 16-year-old in high school.

Cause of Tiger Woods’ serious crash to remain secret