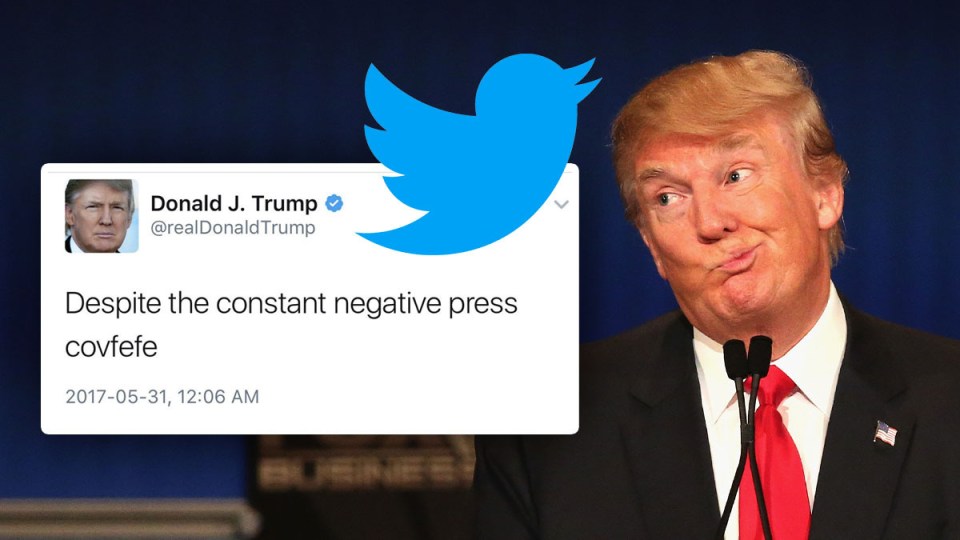 Looking back on Trump's most memorable tweets. Photo: Getty / Twitter

As Donald Trump’s tumultuous presidential term shrinks in history’s rear-view mirror, you may be wondering exactly how he will be remembered.

Will it be as the first US president to be impeached twice? Will it be for his role in inciting the Capitol insurrection?

Or perhaps he will be remembered as the first president to bypass traditional media outlets and Tweet his every fleeting thought.

Now that the historical treasure trove of Trump’s controversial tweets has been permanently banned by Twitter, looking back on them is all the more difficult.

Jasper Robinett, the Australian author behind Unpresidented – The Trump Presidency in 1000 Tweets, has documented Trump’s top Twitter moments and believes the 74-year-old is “the most prolific user the platform has ever had”.

“As with any presidency, the consequences, be they good or bad, require the lenses of time to put everything into perspective and historical context,” Mr Robinett told The New Daily.

“I expect that having had a television celebrity use Twitter to become president and engage in a highly consequential term of office, we may be approaching a time where government is forced to accelerate into regulating and applying the law in the digital space as it does in the physical.”

Dr Brent Coker, a tech commerce researcher and marketing lecturer at Melbourne University, said despite sometimes coming across as “a buffoon”, Trump was a pioneer in the realm of social media campaigning.

“Many of his tweets obviously raised a lot of eyebrows because they don’t expect someone in his position to say things like that,” Dr Coker told The New Daily.

“In the political realm, there’s no doubt that social media can play a huge part in campaigning now days, and it has done for a while.

“Along with that, because it’s digital, you get the possibility of outcome manipulation, and there’s been a lot of disinformation.

“Trump was the first to go full-steam and use Twitter as a megaphone.”

During his four-year term, Trump blessed (cursed?) the internet with his thoughts more than 34,000 times – averaging roughly 35 tweets per day.

Sifting through the thousands of tweets is no easy feat, but Mr Robinett believes there are plenty that stand out.

Eventually, but at a later date so we can get started early, Mexico will be paying, in some form, for the badly needed border wall.
April 24, 2017

The promise of the Mexican/American wall was one of the most controversial and significant promises of his 2016 bid for the top job, so it’s no wonder this made it onto the list.

Then there was his critique of the Oscars ceremony, while acknowledging his own celebrity status.

Lowest rated Oscars in HISTORY. Problem is, we don’t have Stars anymore – except your President (just kidding, of course)!
March 7, 2018

NEVER, EVER THREATEN THE UNITED STATES AGAIN OR YOU WILL SUFFER CONSEQUENCES THE LIKES OF WHICH FEW THROUGHOUT HISTORY HAVE EVER SUFFERED BEFORE. WE ARE NO LONGER A COUNTRY THAT WILL STAND FOR YOUR DEMENTED WORDS OF VIOLENCE & DEATH. BE CAUTIOUS!
July 23, 2018

The tweet left many feeling uneasy, and as if the US was on the brink of starting another world war.

So here is another:

The term ‘fake news’ became a catchphrase for the President, one that managed to seep into the vernacular worldwide.

Speaking of fake news, Trump’s bold and fraudulent proclamation that he won the election turned into a viral Twitter meme of its own.

“Election officials have certified Joe Biden as the winner of the US Presidential election,” it read.

But as far as the most memorable tweet from Trump’s presidency, one stands head and shoulders above the rest.

Despite the constant negative press covfefe
May 30, 2017

The bizarre typo left followers equally confused and bemused, and sparked waves of viral memes and even ‘covfefe’ merchandise.