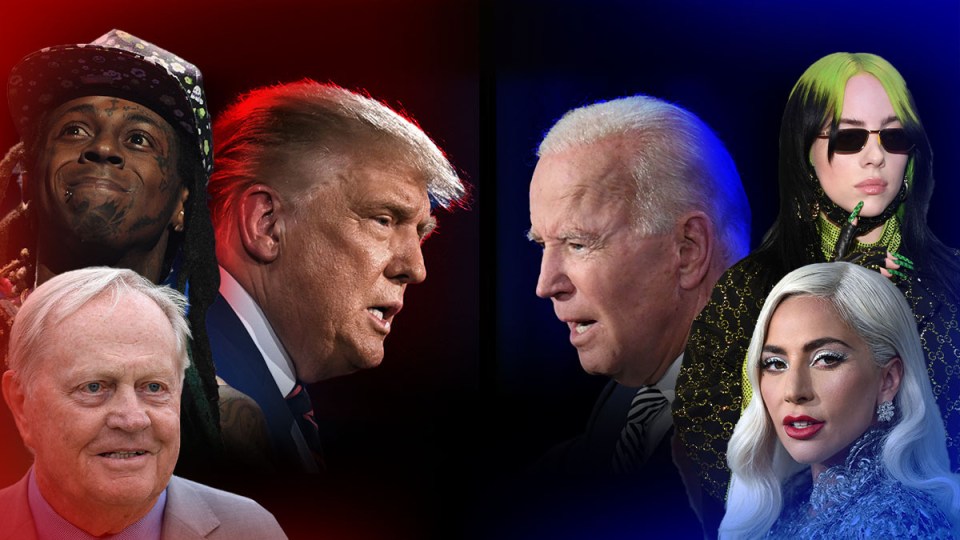 It's shaping up to be an explosive US election – and the A-listers are having their say. Photo: TND

Home to Hollywood actors and international pop stars, the United States has a celebrity culture like no other.

With one day to go until the US election on Tuesday (US time), the rich and famous are working hard to persuade voters to support their presidential pick.

American rapper Lil Wayne shocked some fans when he posted a photo with Mr Trump at the White House on Friday.

Just had a great meeting with @realdonaldtrump @potus besides what he’s done so far with criminal reform, the platinum plan is going to give the community real ownership. He listened to what we had to say today and assured he will and can get it done. 🤙🏾 pic.twitter.com/Q9c5k1yMWf

The platinum plan mentioned by Wayne refers to Mr Trump’s proposals to prosecute the Ku Klux Klan and Antifa as terrorist organisations, and to boost black education and employment.

Kid Rock, an American country/rock musician, is an avid Trump supporter who plays golf with the President.

The Republican rock star has joined Mr Trump on the campaign trail, performing at a rally just outside his home in Detroit.

Rock describes Mr Trump as “down to earth and cool”.

In a bizarre video that almost looks like he is being held hostage, Voight calls the Democratic leader “evil”.

“Biden is evil. Trump must win,” he said.

“He’s real. He will bring back the people’s trusts.”

American actor Kirstie Alley, from the hit sitcom Cheers, said on Twitter she’s voting for Mr Trump because “he’s not a politician”.

Rock singer Ted Nugent, lead guitarist of The Amboy Dukes, has teamed up with Donald Trump Jr on the campaign trail.

He has called Mr Trump “the greatest president in our lifetime”, and believes the billionaire real estate mogul represents “the heart and soul of the best American families out there”.

My Vote is for what makes this country great, freedom of speech & religion, 2nd Amnd, hard working tax paying citizens, police & military. In this election, we have freedom of choice, which all should respect. For me & these principles, my Vote is for @RealDonaldTrump. #Vote ☑️🇺🇸

Mr Nicklaus penned a lengthy endorsement of Mr Trump, in which he claimed the President had “delivered on his promises”.

Get out and vote. I did! pic.twitter.com/IfQb3NeSO3

In a display of solidarity, Cutler shared Nicklaus’s letter on his Instagram page to mixed responses.

She performed for former Democratic nominee Hillary Clinton in 2016, and is set to join Mr Biden for his final campaign event in the crucial swing state of Philadelphia on Monday (US time).

That’s a pic of me in Pennsylvania when I lived in Lancaster. I LOVE THIS STATE. I’m here now! This place is filled with good hearted people—good hearted people that @JoeBiden loves. He’s a good friend. He’s the President this country needs to bring us back together. #vote #Biden pic.twitter.com/3Yo4XddYId

Ahead of Gaga’s rally appearance, Trump campaign communications director Tim Murtaugh released a statement on Sunday accusing her of being an “anti-fracking activist”.

Fast and Furious actor and retired wrestler Dwayne ‘The Rock’ Johnson endorsed Joe Biden and running mate Kamala Harris by interviewing them and posting the footage on social media.

During the interview, Johnson told Ms Harris: “In my opinion, you are a certified badass”.

He said 2020 was the first year he had publicly endorsed a presidential candidate, labelling himself a “registered independent with centrist ideologies”.

As a political independent & centrist, I’ve voted for both parties in the past. In this critical presidential election, I’m endorsing @JoeBiden & @KamalaHarris.

Pop singer Taylor Swift has been promoting the Democrats more than ever this year, allowing her music to be used in an unofficial campaign video for Mr Biden.

Up there's the finish line.
Our future is worth our fight.

Thank you, @taylorswift13, for voicing what #OnlyTheYoung can do. Let’s run! pic.twitter.com/q4EAJwwzqG

In 2016, actor Tom Hanks said it would be a “dark day” if Donald Trump was elected.

Mr Hanks has been a vocal Biden supporter, holding a virtual fundraiser with him in August that raised $US750,000 in just 24 hours.

Lizzo has posted several videos on Instagram urging her followers to vote in the election, while Aniston said she voted for Mr Biden and Ms Harris because: “Right now, a few men in power are deciding what women can and can’t do with their own bodies”.

She also slammed Mr Trump’s record on racism and his response to the coronavirus pandemic.

“He has repeatedly and publicly ignored science … too many people have died,” Aniston wrote.

US election: The celebrities backing Trump, and those endorsing Biden