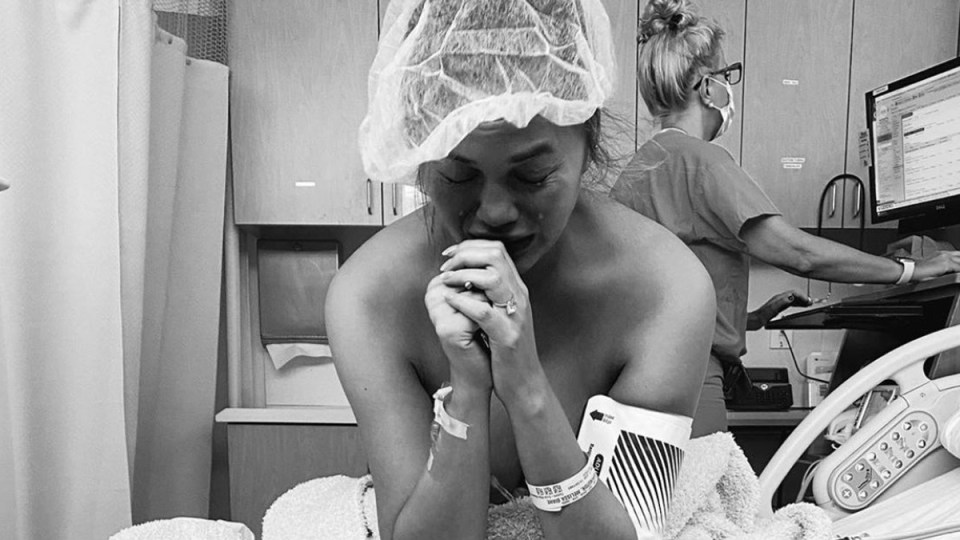 Chrissie Teigen in hospital, where she lost her third baby. Photo: Twitter/Chrissy Teigen

Model Chrissy Teigen has shared a heart-breaking social media post in which she reveals her shock pregnancy loss.

“We are shocked and in the kind of deep pain you only hear about, the kind of pain we’ve never felt before. We were never able to stop the bleeding and give our baby the fluids he needed, despite bags and bags of blood transfusions,” she wrote on Thursday (Australian time).

Teigen, who was expecting her third child with husband John Legend, had spent days in hospital in Los Angeles after being admitted at the weekend.

She also shared her health complications in a series of Instagram posts, saying she had been bleeding a “little bit less than a month”.

It is not known when her baby son’s due date was. But she revealed her third pregnancy just over six weeks ago – appearing in an August 13 video for Legend’s new song Wild while cradling her stomach.

On Thursday, a devastated Teigen revealed they had named their lost child Jack.

“We never decide on our babies’ names until the last possible moment after they’re born, just before we leave the hospital,” she said.

“But we, for some reason, had started to call this little guy in my belly Jack.

“He will always be Jack to us. Jack worked so hard to be a part of our little family, and he will be, forever… To our Jack – I’m so sorry that the first few moments of your life were met with so many complications, that we couldn’t give you the home you needed to survive. We will always love you … Thank you to everyone who has been sending us positive energy, thoughts and prayers.”

She added, “We feel all of your love and truly appreciate you … We are so grateful for the life we have, for our wonderful babies Luna and Miles, for all the amazing things we’ve been able to experience.

“But every day can’t be full of sunshine. On this darkest of days, we will grieve, we will cry our eyes out. But we will hug and love each other harder and get through it.”

In a separate Twitter post just hours later, Teigen wrote, “Driving home from the hospital with no baby. How can this be real.”

Meanwhile, her husband tweeted, “We love you, Jack.”