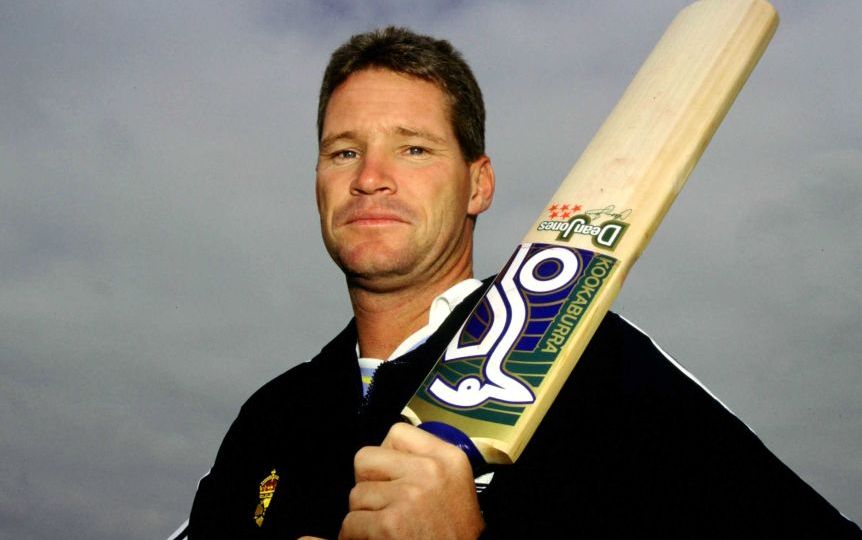 Australian cricketer Dean Jones is remembered as an innovative, swashbuckling cricketer who was never afraid to speak his mind. Photo: Reuters

Dean Jones was a cricketer who revolutionised the art of batting.

His fitness, fielding and style of play all came well before their time. At times the Victorian was controversial but his career was larger than most.

With 52 Tests for Australia and 164 one-day internationals in the green and gold behind him, we remember some of his best and brightest moments, and one ploy that did not work so well.

It was the moment that defined his career and earned him a place in cricket folklore.

If only he could have remembered it.

Playing in only his third Test, and first in more than two years, Jones battled extreme heat, vomiting and dehydration to score 210 against India in sweltering conditions in Chennai in 1986.

With his body at risk of shutting down, the Victorian begged captain Allan Border to retire him hurt at 202 not out at tea, but the skipper taunted him that if he wasn’t up to the job, the Australians would “get a Queenslander (the next man Greg Ritchie) out here”.

Jones scored eight more runs before being bowled by Shivlal Yadav, and was promptly rushed to hospital to be put on a saline drip.

He had spent 503 minutes at the crease in the 42-degree heat.

It was a heroic effort that earned him the player of the match award, but years later Jones said he did not remember much after reaching 120.

“The fractured memory of that amazing experience still jumps back into my mind in bits and pieces,” Jones wrote in his 1994 autobiography Deano: My Call.

“Some of them blurred and some crystal clear.

“Sometimes I have to refer to descriptions written at the time to fill in huge gaps in my own consciousness.”

It remains the highest score by an Australian cricketer on Indian soil and gained extra significance as it came in only the second tied Test in history.

Current Australian cricket coach Justin Langer called it “one of the greatest and most courageous innings of all time”.

ABC Grandstand commentator Jim Maxwell said it was something he would always be remembered for.

“That double-century in the enervating heat of Chennai under Allan Border’s captaincy, no-one would have been able to forget because of his extraordinary commitment and durability,” he said.

Sensational start to the summer of 1987

For any Australian cricketer, there are very few things better than a ton against the old enemy, England.

It’s even better when it’s your first century for Australia in an ODI, the form of the game you would end up being best known for.

Jones was a swashbuckling cricketer in the ODI arena, some might say one of the all-time greats, but it took him longer to carve out a ton in the shortened form of the game than it did for him in his Test career, where he achieved the feat in just his third appearance.

Conversely, it took him 32 ODI innings to get the first of seven centuries, and that wait included an innings of 99 not out against Sri Lanka two summers’ prior.

But on New Year’s Day in 1987, Jones took England to the cleaners at the WACA ground in Perth with a magnificent 104 off 125 balls. Unfortunately for Australia, the innings did not help them chase down England’s total of 6/272.

The most help Jones got was a knock of 28 from opener Geoff Marsh.

Undeterred, he then went on to back up the very next day against a Pakistan attack that featured bowling greats Imran Khan and Wasim Akram.

It mattered not to Jones — he belted a second hundred in as many days, scoring 121 (from 113 balls) but Australia again fell just short as Pakistan chased down the target of 274 with just one ball to spare.

In 1987 in India and Pakistan, Australia won its first men’s ODI World Cup and Jones was first drop for the team, backing up openers David Boon and Geoff Marsh.

The tournament did not feature any of Jones’s amazing ODI centuries but he was an absolute rock at the top of the order.

He averaged 44 with the bat throughout the tournament and only stumbled once, when he made 2 in Australia’s second pool game against Zimbabwe.

In every other innings he passed 30, with his lowest score of 33 coming in the final against England but his ability with the bat and in the field more than made up for it as he helped Australia to a major triumph on the subcontinent.

The clash with Curtly Ambrose

Even Jones admitted this wasn’t the smartest move of his career.

Never afraid to speak his mind, Jones thought he would try to get into the head of towering West Indian paceman Curtly Ambrose during a World Series Cup match at the SCG in 1993.

He said he walked up to Ambrose and asked him to “take your sweatbands off, please”.

“We’re looking for release points and I thought that if I get him upset and get his arousal levels over the top, I think it might make him bowl a bit loose,” Jones said.

The request confused Ambrose, who was reluctant to comply.

Rather than putting it off his game, it fired the fast bowler up.

“I was really upset with him and I told myself I’m going to make it damn hard for him. I’m really going to rough him up,” Ambrose said in 2016.

“I wasn’t going to hurt him, but I was going to make him uncomfortable.”

The next three balls were lightning quick, and Jones went cheaply for 13 after facing only 22 balls.

Jones said the request was a “mistake” as Ambrose went on to take five wickets and helped deliver a 25-run win for the Windies.

“I had 11 West Indians and one Australian batsman sledging me, it was Mark Taylor. He’s going to me, ‘I’ve got two kids, what are you doing?'” Jones recalled.

Maxwell said the incident reflected Jones’s character as someone who was never short of something to say.

“Curtly was below his best but then he was at his best as a result of this taunt, sledge, whatever you want to call it. That was counterproductive for Australia,” he said.

“But, look, he wasn’t the sort of fella who was inclined to step back. If there was something that needed to be said, he would put his foot in it.”

Australia had not won an Ashes series in England since 1975 but in 1989, the Aussies were on the rise and the English were not.

Jones was dominant throughout the series and his performances pushed him on to be named Wisden’s Cricketer of the Year in 1990.

He set the tone for his series in the first Test at Leeds, making 79 and then 40 not out as Australia won by 210 runs and took a 1-0 series lead.

He struggled in the second Test at Lord’s before bouncing back in the third at Birmingham, where rain crushed Australia’s hopes of taking an unassailable 3-0 series lead.

In his only innings, Jones amassed an innings of 157.

Jones contributed strongly again during the fourth Test in Manchester, making 69 with the bat in the first innings, which was all that was necessary as the Aussies cruised to a nine-wicket victory on the back of a 10-wicket match haul from paceman Geoff Lawson.

The fifth Test was another landslide win for the Aussies and in the sixth, albeit a dead rubber, Jones again belted the home side with scores of 122 and 50 as Australia rounded out a famous series win and created an Ashes dynasty that would not see them lose a series until 2005 in England.

Saviour again with another double-ton

The Chennai double century will forever be lauded for its toughness in oppressive conditions but in Adelaide in 1989 Jones put on a master class.

West Indies had an awesome bowling attack, which saw the pace quartet of Malcom Marshall, Ambrose, Courtney Walsh and Patrick Patterson run rampant and they had throughout that series, which the touring side won 3-1.

Enter Jones at second drop, with Australia in some trouble at 2/64.

He would go on to make a marvellous career-high score of 216 off 347, which included a 214-run partnership with Border for the fourth wicket.

Jones would eventually be run out.

The match ended in a draw but Jones was named player of the match for his innings that included 16 boundaries.