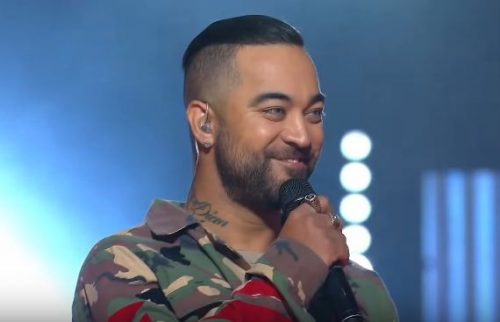 Twitter has gone into overdrive with conspiracy theories about how Guy Sebastian’s brother, Chris, managed to win The Voice.

Fans expressed outrage that he was even allowed to audition when his brother was a coach.

Channel 9 said the final vote came down to an “exceptionally close result, with less than 0.5 per cent separating first and second place”.

As soon as Chris, who was on Kelly Rowland’s team, was announced as the winner of season 9, a hashtag with the word ‘rigged’ started trending on Twitter.

However, one Twitter user wrote: “Family members and friends of the judges should NOT be allowed to compete”.

Another said: “Him being Guy’s brother was a huge advantage, which we know helped him get further. Johnny and Siala are fresh new talent. They were robbed.”

Some went so far as to blame megachurch Hillsong.

The four judges – Guy, Kelly, Delta Goodrem and Boy George – were responsible for determining who from their team would make it to the grand finale.

The public was given a week to vote for who they thought should be crowed The Voice 2020 winner.

“A relative of one of #TheVoiceAU judges won this year… what a surprising and totally not rigged coincidence!” a Twitter user wrote.

“I’m a hugely cynical person, but not even I could have predicted that,” another wrote.

At the end of his last performance, Chris became emotional after his brother talked about the solo artist’s struggle to be seen as someone other than ‘Guy’s brother’.

“I’ve just watched you grow and just stand on your own two feet during this show,” Guy said, paying tribute to his brother.

“Every time you’ve performed on the show, it’s insanely good and I mean that not just as a brother, but as a Coach and as a fan.”

Coming to Chris’s defense, one fan wrote “People saying it’s rigged? How? It was based on a public vote. Congrats to Chris!”

“It’s upsetting to see the harsh reaction of everyone,” another said on Twitter.

“It might appear almost predictable that Chris would win but that’s who the public voted for … not to mention he most certainly was a worthy winner!”

The Voice runner-ups, in no particular order, were Stellar Perry, Siala Robson and Johnny Manuel.