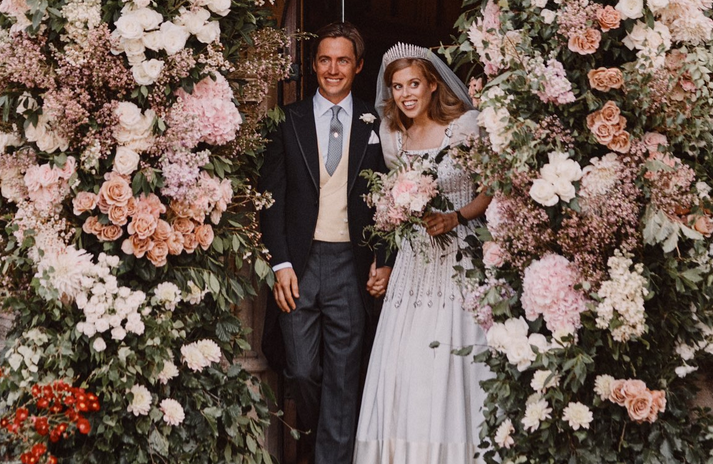 Princess Beatrice and property tycoon Edoardo Mozzi wear smiles as large as their love for each other. Photo: Royal Family

The Queen has shown her personal support for Princess Beatrice by lending her a vintage wedding dress and tiara even as the Palace distanced itself from her black sheep parents.

Beatrice was walked down the aisle by her father, Prince Andrew, Buckingham Palace confirmed, but no photos of Andrew or her mother, Sarah Ferguson, are to be released.

The 31-year-old bride wore the ivory taffeta dress by legendary designer Norman Hartnell and the Queen Mary diamond fringe tiara worn by the Queen on her own wedding day in 1947 as she tied the knot with 36-year-old groom Edoardo Mapelli Mozzi.

Royal writer Penny Junor described Beatrice as “one of the innocent victims in the Prince Andrew sorry saga”, referencing the case surrounding pedophile Jeffrey Epstein and his friendship with the Duke of York.

Andrew has been urged to provide information in relation to the investigation, after his friend Ghislaine Maxwell appeared in court accused of facilitating Epstein’s sexual exploitation of underage girls.

“It’s really touching that the Queen showed such solidarity with her, especially with the tiara that she herself was married in speaks volumes,” Ms Junor told PA news agency.

“I think it shows how fond her grandparents are of her, it’s really heartwarming”.

Beatrice married the Italian property tycoon in a small family ceremony on Friday at the Royal Chapel of All Saints at Royal Lodge, Windsor.

It appears to be a modified version of the dress the Queen wore to the world premier of Lawrence Of Arabia at the Odeon Leicester Square in December 1962.

Ingrid Seward, editor-in-chief of Majesty magazine, told PA: “I think it’s a tremendous compliment to Beatrice and the whole York family that the Queen would lend one of her vintage dresses.

“It’s charming, something mothers and daughters do.

“It says a lot more than anything that this has happened.”