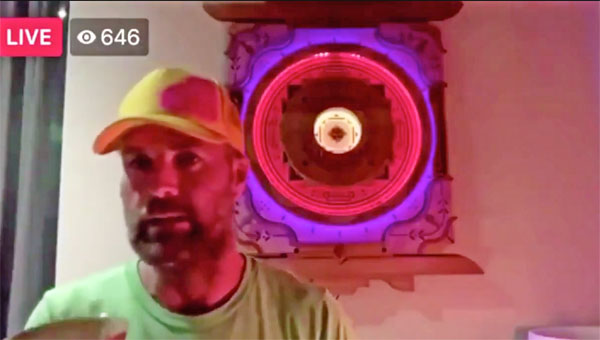 Pete Evans has been fined for his promotion of a BioCharger he said could cure coronavirus.

Celebrity chef Pete Evans has been fined $25,000 for claims about an expensive “light machine” he said could treat the “Wuhan coronavirus”.

The Therapeutic Goods Administration said it had received several complains about Evans’ promotion of the $15,000 BioCharger device.

“Mr Evans allegedly live-streamed on his Facebook page, which has more than 1.4 million followers, claims that the device could be used in relation to ‘Wuhan coronavirus’ – claim which has no apparent foundation, and which the TGA takes extremely seriously,” it said in a statement on Friday afternoon.

Says his claims about its use have “no apparent foundation, and which the TGA takes extremely seriously.”https://t.co/zrYdZVVTLh pic.twitter.com/xDhIwDPMRs

Evans said he used the device most days and claimed it could help with the coronavirus, which has been responsible for 79 deaths in Australia and more than 2 million cases worldwide.

In his Facebook video on April 9, Evans claimed the BioCharger “was a pretty amazing tool” that will “take me an hour or two to explain”. He said it offered “a thousand different recipes and a couple on there for Wuhan coronavirus”.

The TGA said it had issued Evans’ company – Peter Evans Chef Pty Ltd – with an infringement notice for the claims in the live stream.

It issued a second notice for advertising breaches on Evans’ website. The TGA said the page for the BioCharger included claims such as:

Medical experts were quick to express their concerns about Evans’ promotion of the device. Australian Medical Association ACT president Antonio Di Dio told the ABC he had “significant concern about any person promoting a product which claims to be curative of COVID-19”.

“If Mr Evans is promoting a product which claims to be curative of the virus, he is quite simply, very wrong,” he said.

The national branch of the AMA went further, tweeting: “This guy just doesn’t get it. Pete Evans is trying to sell a $15,000 fancy light machine to vulnerable and frightened people to protect them against #COVID-19.

“A few months ago I advised anti-vaxxer/celebrity chef Pete Evans that he should stick to talking about ‘activated almonds’ and leave vaccinations alone,” Dr Nespolon wrote on Twitter.

The TGA said any claim that referenced COVID-19 was a restricted representation under therapeutic goods legislation – and was of significant concern given heightened public concern about the coronavirus pandemic.

The TGA recently published a warning to advertisers and consumers about illegal advertising relating to COVID-19.