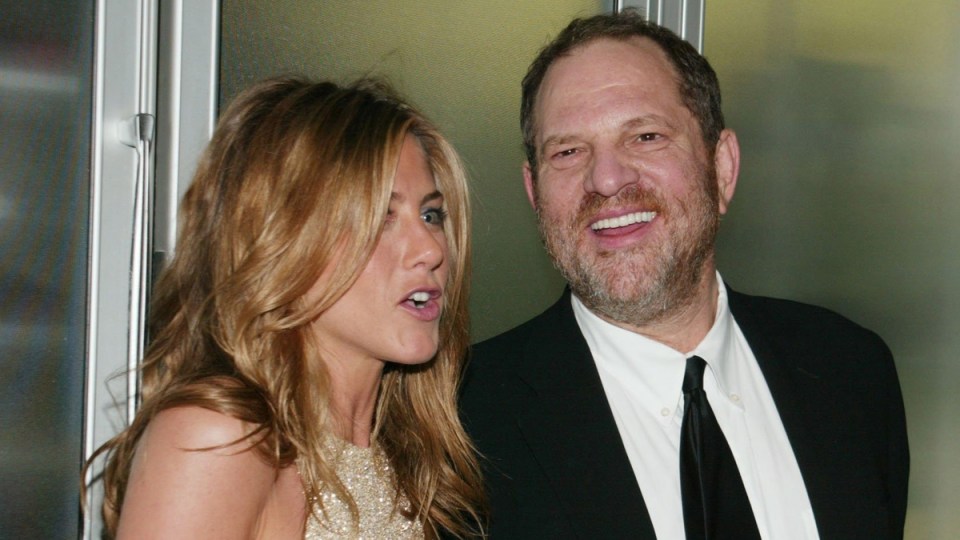 Jennifer Aniston and Harvey Weinstein at a move after-party in 2005. Photo: Getty

Explosive emails have revealed that disgraced producer Harvey Weinstein wrote that “Jennifer Aniston should be killed” after he was told the actor had claimed he sexually assaulted her.

“Jen Aniston should be killed,” Weinstein – now a convicted rapist – wrote in an email in 2017, in response to a reporter seeking comment about an allegation that he had groped Aniston.

He faces up to 29 years in jail, and has already spent several days at New York’s notorious Rikers Island complex.

Variety magazine reports it saw the email at the New York City criminal courthouse, where about 1000 pages of documents were unsealed ahead of Weinstein’s sentencing on Wednesday (local time).

In one document from October 2017, a journalist wrote, “The National Enquirer intends to publish a story reporting Jennifer Aniston was sexually assaulted by Harvey Weinstein”.

Crisis management expert Sallie Hofmeister, who was then a Weinstein spokeswoman, forwarded the email to the producer, adding, “Not sure if you saw this one. Jennifer Aniston.”

The court documents show Weinstein responded to Ms Hofmeister about 45 minutes later, with: “Jen Aniston should be killed”.

Aniston’s management has since said the assault allegations were not true.

“The National Enquirer claims are false. Jennifer has not been harassed or assaulted by Harvey,” her representative, Stephen Huvane, told Variety.

The unsealed documents reportedly also reveal Weinstein’s desperate pleas for help following the bombshell abuse allegations that began his downfall and sparked the #MeToo movement. Among the emails are messages from the fallen producer to movie agents, TV and cinema network executives, and billionaire leaders and politicians.

Meanwhile, Weinstein’s lawyers have asked the court to consider his health and age in sentencing him.

“Please accept this letter as our request that the court sentence Mr Weinstein to a period of incarceration of five years,” three of his lawyers say in a letter to Justice James Burke of state Supreme Court in Manhattan.

They also refer to his “accomplishments” and “charitable endeavours”.

New York prosecutors said last week that Weinstein should get a sentence that reflected not only his conviction for sexually assaulting the two women but a “lifetime of abuse towards others”.

Throughout his adult life, Weinstein had shown a “staggering lack of empathy, treating others with disdain and inhumanity”, Manhattan District Attorney Cyrus Vance’s office wrote to Justice Burke.

As well as his convictions in New York, Weinstein faces charges in Los Angeles in connection with alleged sexual assaults against two women in 2013.