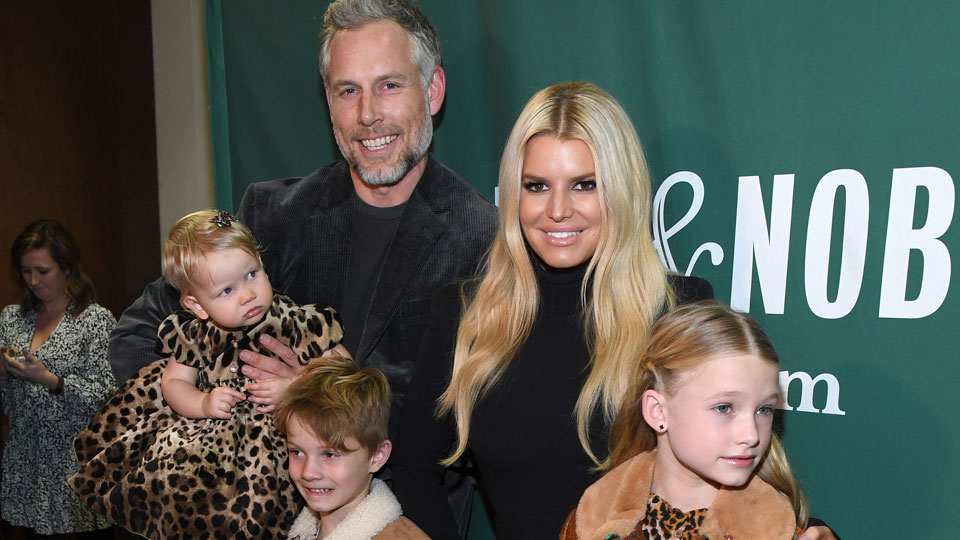 Jessica Simpson has made sure her new memoir Open Book lives up to its title.

In its pages, the singer turned fashion designer talks a stack of private stuff, some of it heartrending, some funny, some legitimately awesome.

Here’s some memorable takeaways from the action-packed life of the 39-year-old Texan, who shares three children with former footballer husband of six years, Eric Johnson.

After being photographed in a (US size 4) high-waisted jean in 2009, Simpson was “taken down by the world,” she said. So much so that she devotes a chapter of the book called ‘Death by Mom Jeans’ to the moment. “It had to be a chili cook-off of all places,” she jokes, but says the takedowns of her figure set of body dysmorphia: “I no longer trusted the mirror.”

Simpson talks publicly for the first time in Open Book about her abuse between the ages of six and 12 by a family friend’s daughter. “It would start with tickling my back and then go into things that were extremely uncomfortable,” she writes. She later confronted her abuser, she told People: “It was extremely painful and still is. That little girl in me wanting to do the right thing, not knowing how to stand up for herself.”

No to The Notebook

Simpson writes she turned down the leading lady role in The Notebook because she was married to Nick Lachey at the time and he didn’t want to see her onscreen with another man. “I had read the script but turned it down because they wouldn’t budge on taking out the sex scene. And it would have been with Ryan Gosling, of all people.”

Watched by Dolly Parton, Shania Twain, Reba McIntyre and then-US president George W Bush, Simpson forgot the words to 9 to 5 during a 2006 Parton tribute. Spruiking her book on the US Today show, she said before she went onstage her boyfriend John Mayer broke up with her and she started drinking. After two attempts at the song, she had to walk off and now can’t look at a photo taken with her country music idols that night: ‘I can’t look at my face because I know the pain that I was having.”

At 17 she was told by people in her church community her curves made men “lustful”, then Columbia Records bosses wanted her to lose seven kilograms. After she filmed her I Wanna Love You Forever video, exec Tommy Mottola told her to get a “six pack. Janet Jackson abs”. So Simpson started taking diet pills and drawing abs onto her stomach with eyeshadow in a cycle of body hate that lasted two decades.

The Your Body is a Wonderland singer broke up with Simpson about nine times during their 2006 romance, she writes, claiming he did it as inspiration for songs. “He’d dump me, then come back saying he had discovered he loved me after all,” she writes. “I thought it was a continuation of a love story, while my friends saw a guy coming back for sex with some foolish girl.” She finally ended it after he called her “sexual napalm” in Playboy.

After two children, Simpson was “so ashamed” of her body she wouldn’t let Johnson see her without a T-shirt: “I had sex with it on and even showered with it on.” She had a tummy tuck despite her doctor warning her that because she was on stimulants and drinking heavily, the surgery was high risk. Now, “I hope you can be proud that your body created life,” she writes to other mums. “I was not strong enough. I can tell you that plastic surgery does not fix what’s inside.”

Filming Dukes of Hazzard while married to Lachey, Simpson had an inappropriate “emotional affair” with co-star Johnny Knoxville, she writes. “I could share my deepest authentic thoughts with him, and he didn’t roll his eyes at me. He believed in me and made me feel I could do anything.”

After her childhood abuse, the star had a long addiction to alcohol and pills. On Halloween in 2017 she started drinking at 7am, filling her ‘glitter cup’ with booze. She missed dressing her kids in their costumes, trick or treating and even her own Halloween party. The next day her friends staged an intervention (while she was having her hair dyed) and Simpson decided to get sober for good.