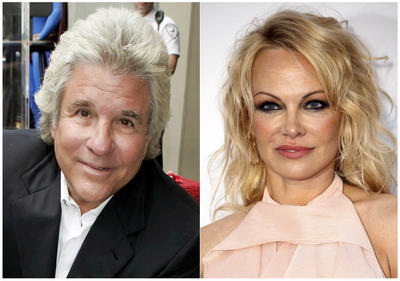 When it comes to short celebrity marriages, Pamela Anderson – a pro even by star standards – has beaten her personal best.

The Baywatch bombshell split from 74-year-old hairdresser-turned-producer Jon Peters (Batman Returns)  just 12 days after the couple announced they had wed on January 20 in Malibu.

“They love each other very much. It’s a great Hollywood romance,” Anderson’s publicist told The Times the next day, although a source told the Hollywood Reporter the paperwork was never filed for what would have been the fifth marriage for both.

Anderson is no stranger to brief matrimonial encounters.

Her 2007 marriage to Rick Salomon lasted only 60 days, while her marriage to Kid Rock in 2006 went the distance for122 days. Kid reportedly filed for divorce over Anderson’s role in Sasha Baron Cohen’s film Borat.

In celebration of everlasting love and romance, here are some of Hollywood’s shortest marriages.

Kardashian married NBA player Humphries in August 2011. The $15 million wedding was televised in a special called Kim’s Fairytale Wedding: A Kardashian Event, but the rot set in early. Weeks after the nuptials, she griped to him on her E! show Kourtney and Kim Take New York: “How am I going to have my career and live in Minnesota?” Humphries possibly didn’t give the right answer: “Baby, by the time you have kids and they’re in school, no one will care about you.”

Cher and the singer songwriter wed in July 1975, only three days after her divorce from Sonny Bono was finalised. Cher attributed the split to Allman’s drug and alcohol addictions.

Electra and retired basketballer Rodman tied the knot in 1998 in a Las Vegas chapel at 7am. It can only be assumed that this ceremony was the epitome of class and elegance, given the marriage was annulled soon after, with Rodman citing he was of “unsound mind”. Electra told People that her “advice to anyone is to not get married in Vegas”.

Spears also fell for the Vegas trap, marrying her childhood friend there in 2004 and enjoying 55 hours of marital bliss. Spears donned her best white trucker hat and cropped top for the occasion. It’s worth googling.

The comedian married TV producer Edmonds in an intimate ceremony on a private French Polynesian island in 2008. They were seen arguing shortly after the ceremony about Murphy’s mother, who lived with the pair in the family home.

In 2019, the Oscar winner married his fourth wife, makeup artist Koike, in a ceremony that largely slipped under the radar. The couple later had the marriage annulled, claiming they were both really drunk at the time.

But before Koike there was Alice Kim, Patricia Arquette and Lisa-Marie (who later wed Michael Jackson for a little while). Ultimate Elvis fangirl Cage married his idol’s daughter on the 25th anniversary of his death in 2002. Much to consider.

The long-term Hollywood sweethearts met in 2008 on the set of The Last Song, were engaged, broke up and got back together before tying the knot in private in December 2018. The pair announced their split shortly after Miley was photographed kissing reality star Kaitlynn Carter in November 2019 and are already officially divorced.

A true (and brief) Charlie’s Angels romance, Barrymore and Green wed in 2001 before divorcing, citing “irreconcilable differences”. The marriage was short, but The Chad was great.

At 19, Barrymore married 31-year-old bar owner Jeremy Thomas amid her battle with drug and alcohol addiction in the early 1990s. She went on the couple’s honeymoon to Hawaii without Thomas before deciding tying the knot might have been a hasty move.

Teenage hearts all over the world broke when the One Tree Hill stars announced their separation in September 2005 after only five months of marriage. Murray had televised the engagement process, while Bush later claimed that the split was due to differing ideas of marriage.