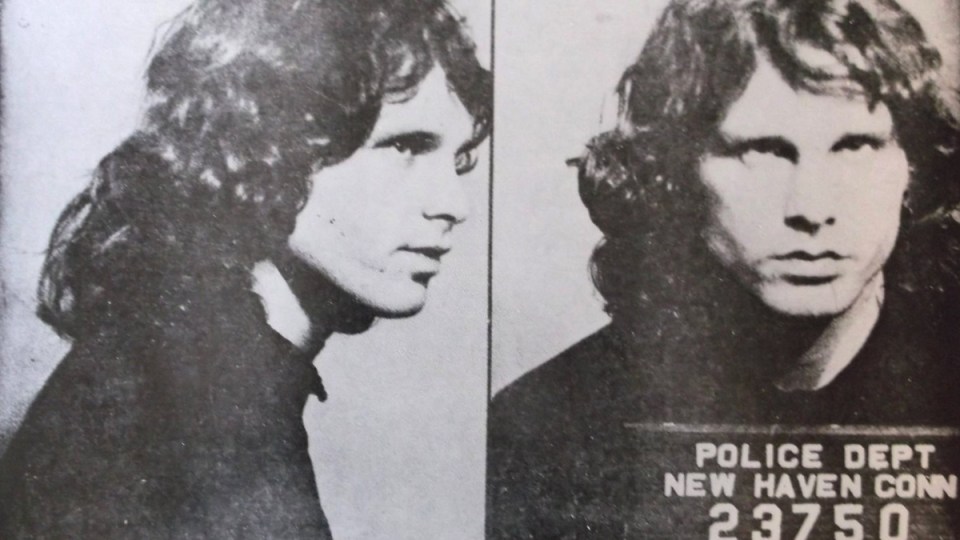 The Doors frontman Jim Morrison was dragged off stage and taken into custody by police on December 9, 1967. Photo: Getty

It was 1967 and The Doors were one of the hottest, and most controversial, bands in the United States.

The band had released their eponymous debut album in January, spawning the hit single Light My Fire which reached No.1 on the Billboard charts, selling more than a million copies.

On December 9, 1967, the Doors cemented their status as counterculture icons when frontman Jim Morrison became the first rock star to be arrested on stage, during a performance at the New Haven Arena in Connecticut.

The infamous incident only served to further enhance the enigmatic Florida-born singer-songwriter and poet’s mystique and bad boy persona.

The arrest occurred after a police officer spotted Morrison spotted kissing a fan backstage in a bathroom shower stall before the concert.

The policeman told Morrison and the woman he was with to leave, to which Morrison responsed, “Eat it”.

The policeman responded by taking out a can of mace and warning Morrison that it was his “Last chance”.

Morrison replied, “Last chance to eat it”, after which the policeman sprayed both him and the woman with mace.

After recovering and taking to the stage with The Doors, Morrison taunted police with an obscenity-laced ditty about “little men in blue”.

The concert was brought to an end when police stormed the stage and dragged Morrison off it.

He was taken to the local police station where he was booked on charges of inciting a riot, indecency and public obscenity.

The charges were later dropped due to lack of evidence.

More than 50 years later, those there to witness the event are still talking about it.

“A cop came to the stage and said, ‘Jim, tone it down or we’re going to have to take you off the stage’,” Jake Russell, who has a hot dog stand filled with memoribilia of the night, told News8.

Tommy and the Rivieras lead singer Tom Janette was backstage on the night, and recounted the incident.

“As [the policeman’s] shaking the mace, he says, ‘This is your last chance to evacuate the property and leave’,” he said.

“And Morrison turned around and said, ‘This is your last chance to eat me’ and pushed the cop. So I open up the door to the hall and holler ‘Fight!’ and about 10 police came in and proceeded to knock the hell out of Morrison.”

In 1971, Morrison died in a Paris apartment at just 27 years of age, with the official cause of death listed as heart failure.

His untimely death came less than 12 months after those of fellow 1960s music icons Jim Hendrix and Janis Joplin, both of whom were also 27.

In 1994, the death by suicide of Nirvana frontman Kurt Cobain at the age of 27, popularising the notion of the so-called “27 Club”, due to the number of famous musical icons who died at that age.

On this day: Jim Morrison becomes first rock star to be arrested on stage