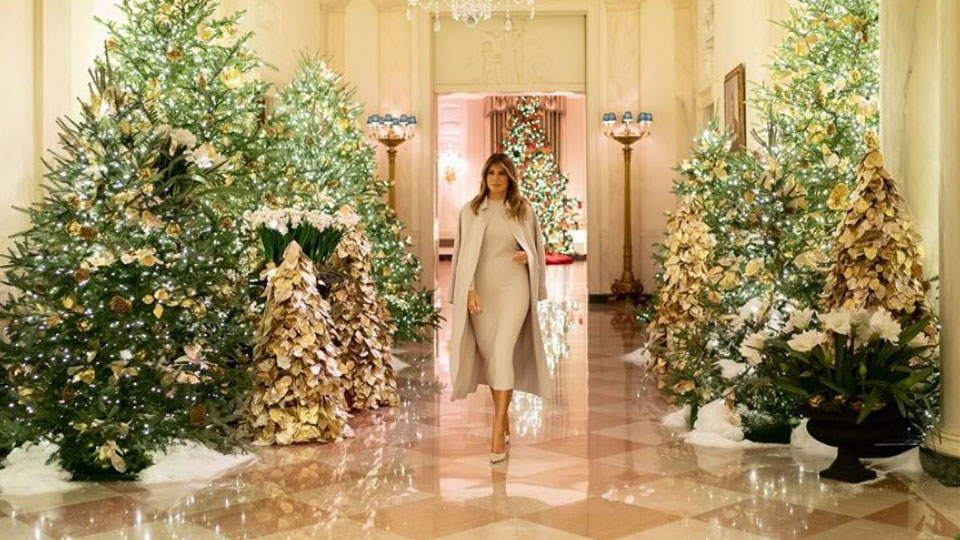 In what is becoming an anticipated annual tradition, Melania Trump has released a video showcase of the White House’s Christmas decorations.

And this year she’s ditched fashion statements for monochrome.

While the Daily Beast tried to drum up controversy by labelling FLOTUS’ efforts “joyless”, the whole effect is glacially tasteful with some weird parts.

It’s safe to say the controversy of last year’s blood red forest and two from her montage featuring ballet dancers and skeletal trees is behind Melania, although worth a quick recap.

"Take the blood of my enemies and paint the trees. Send it to the village for the Winter Harvest Festival as warning. Let no one ever cross me again. Be Best."

"Be Best, my Lady," the underling replied and scurried away. pic.twitter.com/WXkj6ygfBN

AIDE: There’s this perception you don’t care about children, so we need to—

MELANIA: Get me the blood-red nightmare Christmas trees with NO ORNAMENTS OR PRESENTS pic.twitter.com/2F3jv8oyAO

This time, Melania’s festive look is themed ‘The Spirit of America’.

That means she’s gone all out on models of the White House with mini wreaths on the windows and ‘Be Best’ decorations (one made from Scrabble tiles) on trees and in hallways.

The video kicks off with Mrs Trump – dressed in winter white, including a signature shrobed coat called “ridiculous” by the Washington Post – opening an empty advent calendar.

She glides intently from room to room, examining the handiwork of the White House team.

Melania tweaks a fireplace here, adds some finishing touches, and sprinkles fake snow on a tree there.

The backing track is heavy on the harpsichord effects found on a mid-priced keytar – Think a department store Christmas commercial with children in broderie anglaise and twinkly unnecessary things.

“’I am delighted to share this beautiful exhibit of patriotism for all to see, and excited for everyone to experience the beauty of the #Christmas season!” Mrs Trump said on social media.

“The Spirit of America” is shining in the @whitehouse! I am delighted to share this beautiful exhibit of patriotism for all to see, and excited for everyone to experience the beauty of the #Christmas season!

The iconic gingerbread White House is back, along with a reported 29 fir trees and some 14,000 ornaments.

Melania started planning her Christmas vision in July, according to a White House statement, and “she was dead on schedule”, Coleen Christian Burke, author of Christmas with the First Ladies, told Time.

Predictably, social media reaction to the Christmas decorations was mixed.

“Breathtaking. Just beautiful,” wrote one user. “Grateful for you,” said another.

Others, not so much. One asked if Mrs Trump was sprinkling attention-deficit drug Adderall on the trees.

Not such a gift for Mrs Trump is CNN correspondent Kate Bennett’s new book Free, Melania: The Unauthorised Biography, published on Tuesday (US time).

Bennett writes Donald Trump adviser Roger Stone is suspected of being behind the release of nude photos of Melania from a 1996 modelling photoshoot.

They were printed by the New York Post in July 2016, at a time when presidential hopeful Mr Trump was involved in a public fight with the family of a US soldier killed in Iraq.

Mr Stone denied having anything to do with the photos’ release to several media outlets.

Also contained in the book: Claims the president and first lady have separate bedrooms, and that Melania has a “glam room” and Pilates studio.

In terms of relationships, she is “cordial, not close” with stepdaughter Ivanka and doesn’t care much for vice president Mike Pence’s wife Karen, according to the book.

Bennett writes that while the first lady has a “360-degree understanding” that “elevates [her] beyond the stereotype of a former model”, and is “kind and warm” to staff, her ‘Be Best’ campaign doesn’t amount to much.

“Mrs Trump is surprised at Kate Bennett’s reporting. Our office worked with Kate in good faith on her book, and thought she would do an honest job,” Ms Grisham told the Guardian.

“Sadly, it includes many false details and opinions.”