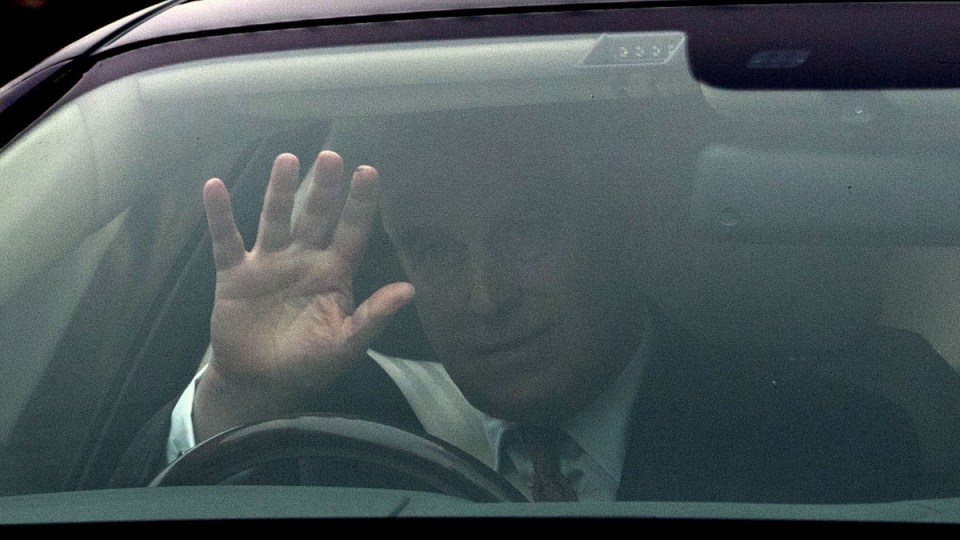 Prince Andrew leaves his home on Thursday, pictured for the first time since this week's extraordinary announcement from the palace. Photo: AAP

Britain’s embattled Prince Andrew has reportedly been forced to cancel a weekend trip to Bahrain amid mounting pressure for him to give evidence to the FBI.

British media is reporting that the prince had planned to fly to Bahrain on Saturday for an event for his pet project, Pitch@Palace, despite this week stepping back from royal duties for the foreseeable future.

On Thursday (local time), Buckingham Palace told him to cancel the trip.

“His position had become such a distraction the only decision was for him to not go,” a royal source told The Mirror newspaper.

Lady Hervey defended the prince in the 13-minute interview, saying she she felt she was being watched by hidden cameras but only decided to leave after staying more than a week.

She said when the revelations about Epstein came out she was “completely shocked”.

“I saw things but I didn’t see the truth, like I had no idea what was really going on.”

Meanwhile, the Duke of York, 59, will continue to work on his treasured scheme, which connects entrepreneurs with investors. He will do so privately – and no money for Pitch@Palace will come from royal coffers.

Pitch@Palace is said to be close to the duke’s heart, having created thousands of jobs in the past five years.

Prince Andrew was forced by the Queen to retreat from public life this week, in an unprecedented move that followed his train-wreck interview with the BBC about his links with dead pedophile Jeffrey Epstein.

He will perform no royal duties “for the foreseeable future”, and will take no money from the Queen’s sovereign grant.

In a further blow to the duke, the Queen is said to have involved his older brother, Prince Charles, in discussions about his future.

In the days since the BBC aired Andrew’s interview, high-profile business sponsors KPMG, Standard Chartered and Inmarsat, a British satellite telecommunications company, have all said they will discontinue their financial support for Pitch@Palace.

Overnight on Thursday local time, the prince resigned as patron of the Outward Bound Trust (his daughter, Princess Beatrice, 31, sits on the trust’s board but was banned from discussions about his role) and stepped down as chancellor of Huddersfield University.

The prince’s private secretary, Amanda Thirsk, has also reportedly been removed from her job. Ms Thirsk, who is believed to have been the driving force behind the disastrous interview, will become chief executive of Pitch@Palace.

A statement by His Royal Highness The Duke of York KG. pic.twitter.com/solPHzEzzp

Buckingham Palace is also understood to be bracing for the duke – the Queen’s second son – to be issued with a subpoena by US authorities. It would force Andrew to testify under oath about his friendship with Epstein.

American lawyers for Epstein’s victims have urged the duke to co-operate with investigators, insisting he was “simply not credible” in his weekend interview.

“I’ve been working with my five Epstein victim clients for months,” US lawyer Lisa Bloom tweeted on Thursday.

“Prince Andrew was simply not credible in his [BBC] interview.”

Gloria Allred, another US lawyer representing alleged victims of Epstein, told the broadcaster criminal and civil legal routes could be used if Andrew did not agree to be interviewed by investigators.