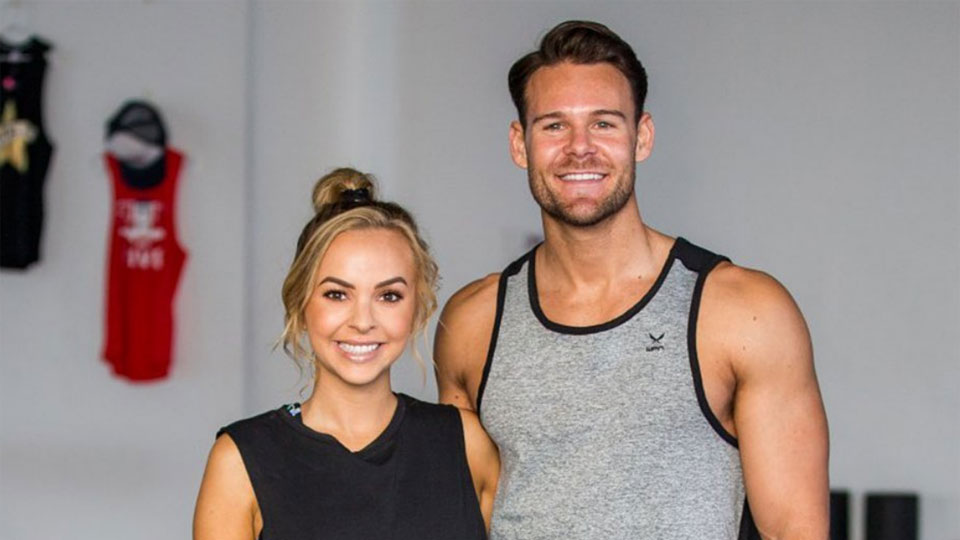 Angie Kent and Carlin Sterritt work out together on The Bachelorette. Photo: Instagram

A week after choosing Carlin Sterritt as last man standing on The Bachelorette, Angie Kent is onto her next big thing: The PR campaign trail for her first book If You Don’t Laugh You’ll Cry.

The former nanny turned reality TV star cranked it out in three weeks and covers off topics including how she met Gogglebox partner Yvie Jones when they worked as Christmas characters, an eating disorder and mental health problems, and her ‘fake it ’til you make it’ philosophy.

“It’s not an autobiography by any means. I’m so young and haven’t lived enough to talk about my heroic life,” Kent, who is moving to Sterritt’s home town of Sydney in January, tells The New Daily.

“It’s life lessons and stories from your best mate you never knew you had.”

But for real if you don’t laugh you will freakin’ cry! 😉 I’m bloody proud to work hard and I am so grateful for the happiness I have found! Live for the day my sweet thangs! 📖 @hachetteaus Hair and Makeup @goochihairandmakeup Styled by my gal @kim_styledbycapitalk Dress @eliyathelabel

You write that you’re scatty, but you seem grown up and powerful. Which is the real Angie?

I mean, a bit of both. I very much know who I am, but I do struggle as well. You can have days when I’m like ‘Oh my God, what am I doing?’ and others when I’m fine.

I think everything that you go through you’re supposed to go through, and that you learn and grow from it even if you don’t see it in the moment. I wish I could have been more educated growing up about how to look after my mental health and my body.

The jungle was a game-changer for me. I came out feeling I could do anything. I didn’t think I needed anything to hide behind, I could just be me. I still have my bad days when I don’t want to get out of bed, but I have tools to manage that now. I go for a walk, list three things I’m grateful for, simple things.

Did you choose the right man on The Bachelorette?

Definitely. 100 per cent. Obviously I don’t know what the universe has in store for me, but I believe this relationship could last forever.

I definitely feel I have somebody who picks me up when I’m down, isn’t intimidated by me. He’s very supportive and very sensitive and that is rubbing off on me. I’m not an overly affectionate person, but with him I can be vulnerable.

Your breakdown sending Ryan home was epic. Was it real?

Oh, there was no way a producer could make me feel or act like that. That was so raw. It was horrible, to know I had to make the right choice in front of three boys who each owned a piece of my heart.

What’s annoying you so far about Carlin?

Ah, nothing. We’ve got to spend the last five days together in the real world, but we haven’t had time to really know things. I think the only annoying thing about him is he’s sensitive.

Does he have enough of a sense of humour for you?

In the show you only see the guys the way [producers] want to you to see them. There’s plenty of times he’s funny. He’s a massive dork. He doesn’t look like it because he’s into his fitness,

He’s quite sweet as well. He’s just always up for a laugh. I want everybody to know he’s beautiful and there’s a lot more to him than everybody saw on TV.

Life is so much brighter with this girl ✨

Did your nannying work make you feel you could do kids with one eye shut or that you never want to go down that path?

Oh my God, I can definitely handle children. When I do become a mum, I’ll know how to do it. But at the same time I know children are so hard because a lot of it is mundane and unpredictable. You know the child could sh-t itself at any minute.

Oh, I have no idea but I would love to spend the rest of this year celebrating the book. And I really want to enjoy and celebrate my relationship. Potentially we’re in talks with exciting stuff coming up too.