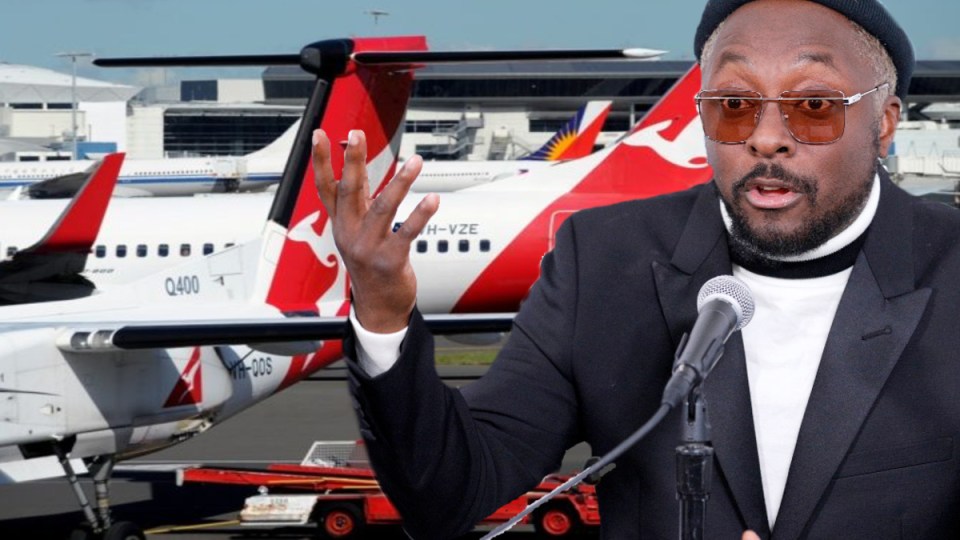 Qantas has supported its flight attendant after a racism row with rapper will.i.am.

Black Eyed Peas frontman will.i.am has hit back at Qantas after it said it would support legal action by a flight attendant who the rapper has accused of being “racist” and “beyond rude”.

The singer and the airline have been trading blows in a row that blew up after he flew Qantas from Brisbane to Sydney at the weekend.

On Tuesday, in response to a tweet that claimed that wearing noise-cancelling headphones was no excuse for his behaviour on the flight, the rapper said that headphones were becoming standard.

“People who serve the paying public need to know that passengers have on devices that block out outside sound … sending the POLICE after them is a bit much,” he tweeted.

The dispute was sparked after an on-board incident, where will.i.am clashed with the Qantas attendant when she reportedly asked him to put away his laptop ahead of landing.

He claimed she was “overly aggressive” because he couldn’t hear her through his noise-cancelling headphones.

“I’m sorry to say me and my group have experienced they (sic) worse service due to a overly aggressive flight attendant… I don’t want to believe she (sic) racist. But she has clearly aimed all her frustrations only at the people of colour,” he tweeted.

The rapper was met by police at Sydney Airport on Saturday after the mid-air row.

In subsequent tweets, will.i.am used the hashtag racistflightattendant, named the woman and shared an image of her and an Australian Federal Police officer.

“.@Qantas Your #RacistFlightattendant was beyond rude & took it to the next level by calling the police on me. thank god the other passengers testified that SHE was out of Control the police finally let me go. Imagine if the police were as aggressive as (the flight attendant),” he wrote.

We live in 2019 & technology is advancing…they have WiFi is certain planes & noise canceling is becoming a standard…people who serve the paying public need to know that passengers have on devices that block out outside sound…sending the POLICE after them is a bit much 🤷🏿‍♂️ https://t.co/CZHJaMFLUE

On Monday, a Qantas spokesman said the airline would be willing to provide legal support to the flight attendant.

“Absent a retraction, and if the crew member wanted to take the matter further, we’d certainly be willing to provide legal support for them to do this,” the spokesman said.

On Saturday, Qantas said it “completely reject[ed]” the allegation that the incident had anything to do with race.

“There was a misunderstanding on board, which seems to have been exacerbated by will.i.am wearing noise-cancelling headphones and not being able to hear instructions from crew,” a spokesman said.

“We’ll be following up with will.i.am and wish him well for the rest of the tour.”

The airline sent a memo to staff about the situation, saying Qantas fully supported its crew members, The Daily Telegraph reported on Monday.

“We rejected claims of racism and have since asked will.i.am for a retraction of that claim,” the memo said.

“We fully support our crew and the great work they do ensuring safety of all those on board.”

The singer has also defended his decision to publicly identify the flight attendant. On Monday, he wrote on Twitter that “everyone should operate with respect”.

“Especially people who serve the public,” he wrote.