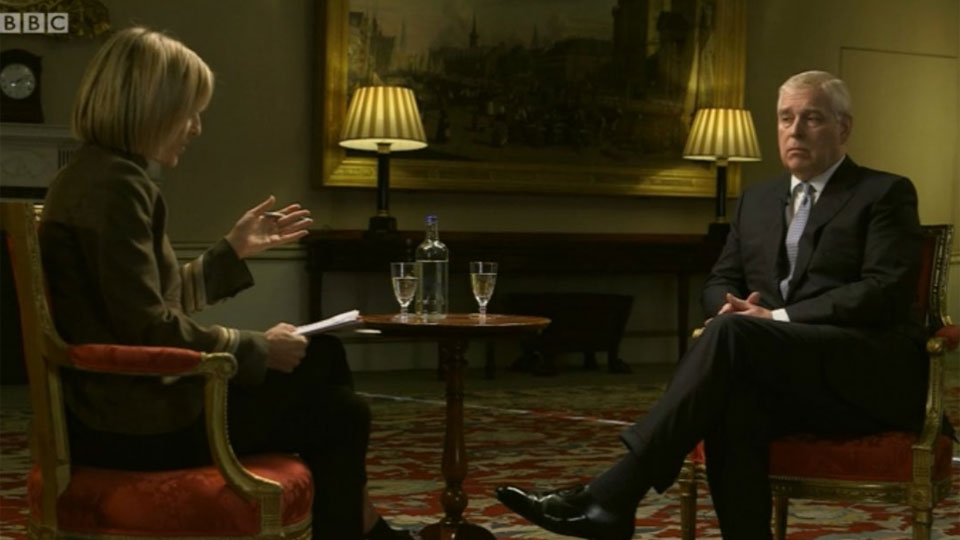 Prince Andrew's interview with the BBC has been described as a PR disaster. Photo: Twitter

A public relations adviser to Britain’s Prince Andrew quit his job after the royal ignored his advice not to go ahead with a TV interview about Jeffrey Epstein.

Jason Stein confirmed to ITV News that Andrew overruled his advice to deny the request for the interview that since airing has since been crowned a catastrophic embarrassment.

It comes as the “honourable” Prince Andrew said he is willing to testify or give a statement under oath during the ongoing Epstein sex trafficking investigation.

“I will have to take all the legal advice that there was before I was to do that sort of thing,” the beleaguered Duke of York said in an extraordinary interview with BBC Newsnight presenter Emily Maitlis.

“But if push came to shove and the legal advice was to do so, then I would be duty bound to do so.”

In the interview screened on Sunday morning (Australian time), Andrew said he has discussed the Epstein situation with other royals, and “it has been what I would describe as a constant sore in the family”.

“We all knew him and I think that if we have a conversation about it we are all left with the same thing. What on earth happened?”

The duke’s performance in the interview drew widespread condemnation and was labelled by prominent British lawyer Mark Stephens as a “catastrophic error”.

“It has been what I would describe as a constant sore in the family.”

Prince Andrew tells #Newsnight his relationship with Jeffrey Epstein, an American financier who took his own life while awaiting trial on sex-trafficking charges, has caused anguish for the Royal family pic.twitter.com/MZGjnzstYW

Asked about the allegation he danced with 17-year-old Epstein ‘sex slave’ Virginia Roberts, now Giuffre, at London’s Tramp nightclub in 2001 before having sex with her, Andrew said “it didn’t happen”.

Ms Giuffre, who now lives in Australia with her husband and children, told Nine’s 60 Minutes on November 10 that she remembered Andrew from the night because he “sweats a lot and he smells funny”.

Andrew, 59, claimed he took eldest daughter Princess Beatrice to a party at a Pizza Express in suburban Woking at “four or five in the afternoon” on the day “that’s being suggested”.

He rebutted Ms Giuffre’s recall of his body odour with a medical explanation.

“I had suffered what I would describe as an overdose of adrenaline in the Falklands War when I was shot at and I simply … it was almost impossible for me to sweat,” Andrew claimed.

The prince did agree an infamous photo of him with his arm around Ms Giuffre – Epstein’s alleged procurer Ghislaine Maxwell in the background – is “definitely” real.

Ms Giuffre, now 36, told 60 Minutes the photo was taken “right before I was abused by him” in London.

She said she was trafficked by Epstein to Andrew three times, in London, New York and a private Caribbean island.

The duke gave a convoluted explanation about why he did not have sex with Ms Giuffre or any other young woman trafficked by Epstein.

“No, and without putting too fine a point on it, if you’re a man it is a positive act to have sex with somebody,” he said.

"I don't remember this."

Prince Andrew says he has wracked his brains but cannot recall any incident involving Virginia Roberts.

Andrew said his relationship with dead pedophile Epstein “had some seriously beneficial outcomes in areas” and “people I met and opportunities I was given to learn by him were useful”.

Before the disgraced financier’s child sex conviction, “I don’t think there was anything wrong” with being friends, he said.

He admitted staying with Epstein at his $108 million mansion in New York in 2010 after his release from jail “was the wrong decision”.

Said the duke, “I stayed with him and that’s the bit, as it were, I kick myself for on a daily basis because it was not something that was becoming of a member of the royal family.

“We try and uphold the highest standards and practices and I let the side down, simple as that.”

Asked why he stayed with a convicted sex offender, the duke said “it was a convenient place to stay”.

He added, “At the time I felt it was the honourable and right thing to do and I admit fully that my judgment was probably coloured by my tendency to be too honourable but that’s just the way it is.”

As to whether the episode has been harmful to the royal family or his mother the Queen, “I don’t believe it’s been damaging to the Queen at all, it has to me,” Andrew said.

Leaked footage of US TV anchor Amy Robach earlier this month shows her complaining a story about Epstein was “quashed” by bosses because of pressure from the British royal family.

Ms Giuffre told 60 Minutes “Prince Andrew should go to jail. Is he ever going to? Probably not.”