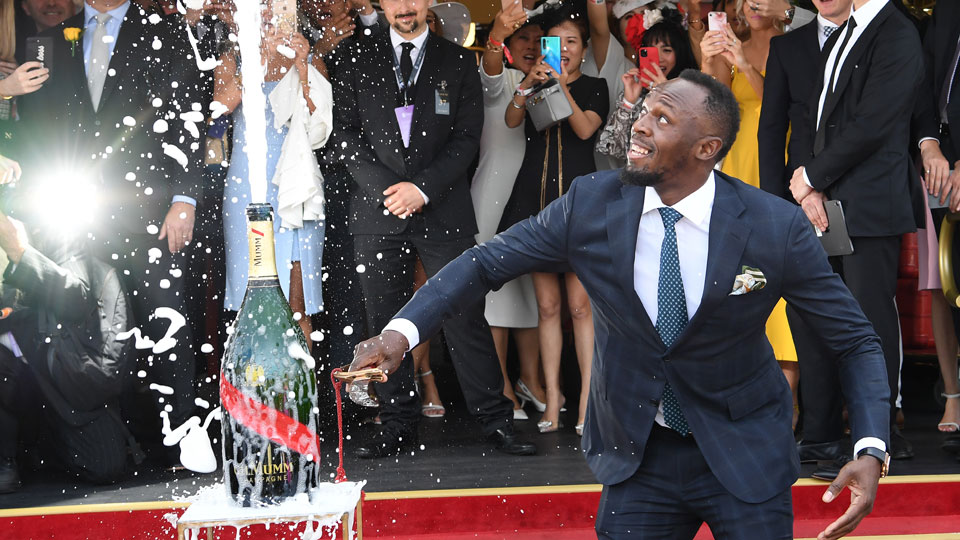 With his reality TV star wife Chyka, Bruce Keebaugh owns The Big Group, one of Australia’s largest event planners. Yet here he is, at 9.56am on Melbourne Cup day, in a morning suit, sweeping twigs from the deck of the Lexus marquee in the Birdcage at Flemington.

The marquee is one of 26 in the Birdcage, the exclusive 17,000 square metre compound perched on the home straight. They can cost upwards of $1 million for the four days of the Melbourne Cup Carnival, and that’s before a single champagne cork is popped.

Even two or three years ago, a Birdcage invitation was jealously guarded. James Packer and glamorous then-wife Erica would slip through the crowd, chatting to Eddie McGuire and business chiefs. Every celebrity in town – or around the world – wanted to be seen.

It’s hosted Hemsworths, Hiltons, politicians, Shane Warne. It’s fun and more visually stunning than ever, like being inside a glitter cannon. But in 2019, the truly famous seemed thinner on the ground than in previous non-influencer years.

Still wielding his broom at Lexus – one of about a dozen marquees overseen by The Big Group – Keebaugh disagrees the Birdcage is running out of A-list puff.

“We’re feeding about 5000 people today. It’s the biggest year we’ve ever had,” he tells The New Daily. And yes, chicken sandwiches are still a thing: “They’re like Champagne. Never go out of style.”

The three-storey Lexus marquee is on the coveted corner spot Emirates had until it bailed a couple of years ago, along with Myer, Lavazza and Crown Resorts. It has everything from Neil Perry burgers to a Mecca pop up bar, a harpist and custom monogrammed race books.

What it doesn’t have this Melbourne Cup is famous faces, apart from Princess Diana’s niece Lady Kitty Spencer, who most Australians couldn’t pick out of a lineup if they had a dozen clues.

Just down the road at Kennedy, hosted by luxury watch retailer James Kennedy, TV interior designer Shaynna Blaze is the most recognizable star as gourmet ham and cheese toasties are passed with Perrier-Jouet bubbles.

“It’s amazing. You walk in and see that marble and the gold and then there’s this elevation and all this natural light,” says Blaze, who caught an Uber chopper to the Birdcage.

“I love coming to the races because you can be as crazy and out there as you like, or as elegant and classic. There’s nothing like it.”

A Kennedy publicist says the decision to have clients rather than wall to wall WAGS or reality TV stars in its marquee was deliberate: “It’s all about crafting the atmosphere for them to really enjoy and feel special.”

The 2019 Mumm marquee looks like a Wes Anderson movie, acres of pale pink walls and red velvet with staff dressed as bell boys and in one shouldered scarlet dresses. One man is wearing an Australian rowing team blazer.

Around midday, Studio 10’s Kerri-Anne Kennerley breezes through, in a bird of paradise dress with gold Dolce and Gabbana sandals. She’s been up since 3.45am but is perky: “You won’t find anything like this around the world.”

Also at Mumm is athlete Usain Bolt, who  comes to the track to dress up. “The energy’s wonderful. I like the people watching,” he says.

Meanwhile, at the marquee hosted by dating app Bumble (freebies include mini devices to light selfies properly), it’s all about the ladies, with Jesinta Franklin, Nadia Bartel and Olympia Valance networking and hugging as pale pink cocktails flow.

“I love the races, there’s nothing like it in terms of atmosphere and the effort people go to,” says Bartel, gleaming in a yellow Melissa Jackson cartwheel hat and pantsuit from Net-A-Porter.

As to how she is after her much-publicized split from former footballer Jimmy Bartel, “I’m good.”

An arm’s length away, Franklin – in a custom Camilla and Marc buttercup dress with high neck and V back – is “feeling great” while six months’ pregnant with her first child with husband Lance Franklin.

“We know what we’re having but we’re keeping it a secret,” Franklin tells The New Daily. “We’re both super excited. He’s going to be an amazing dad.”

Playing to Win star Valance, grabbing a kiss with footballer boyfriend Tom Bellchambers, is at her first Melbourne Cup:  “I’m a bit of a punter and I don’t really go out or dress up much so this is incredible. ”

As former The Bachelor contestant Keira Maguire (carrying just one lipstick and a credit card in a tiny Fendi bag) poses in front of a mirror, Australia’s richest woman Gina Rinehart walks by.

She’s with the bloke in the rowing blazer. And trucking magnate Lindsay Fox! And holy hell, Lindsay Lohan is nearby, on her way to the Ten marquee.

Rinehart heads to Lexus to be snapped with Lady Kitty. Finally, some Birdcage-worthy star power … money and an aristocratic model.

The Birdcage at Melbourne Cup: Flemington’s fabled canary may be running out of oxygen