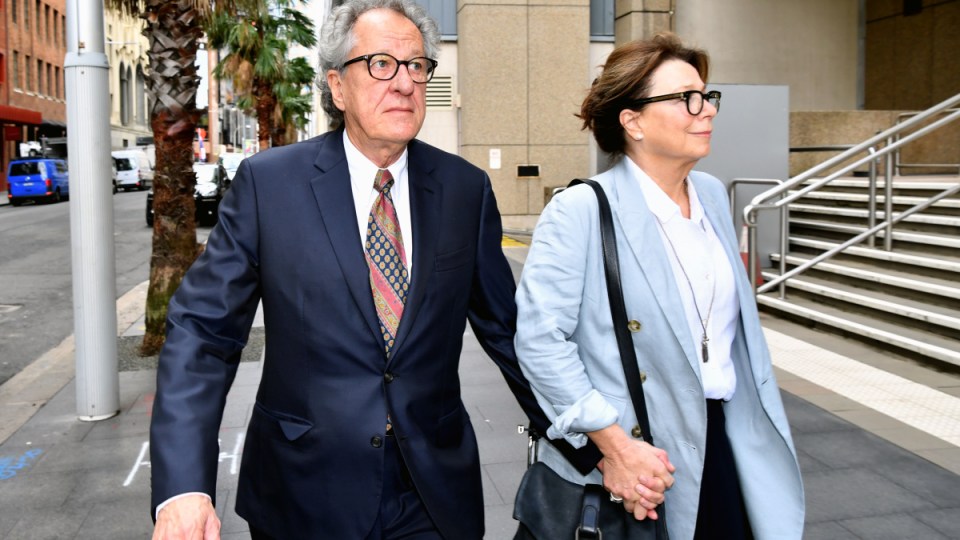 The judge who awarded Geoffrey Rush $2 million in special damages heard no evidence the actor was unable to work and had fewer job offers as a result of Daily Telegraph articles, an appeal hearing has been told.

“Your Honours might find this an astonishing omission,” Tom Blackburn SC told three Federal Court judges in Sydney on Monday.

Mr Blackburn is acting for Nationwide News, which is appealing a finding it defamed the actor who was awarded $2.9 million in total damages.

Justice Michael Wigney in April found the Daily Telegraph’s publisher and journalist Jonathon Moran were reckless regarding the truth when they reported Mr Rush had been accused of inappropriate behaviour during a Sydney theatre production of King Lear.

The judge ruled a poster and two articles contained several defamatory meanings – including that Mr Rush was a pervert and a sexual predator – and the publisher hadn’t proved they were true.

Mr Rush was awarded $850,000 general damages and approximately $2 million in special damages to cover past and future economic loss.

Mr Blackburn said Justice Wigney “cobbled together” speculation and inference to find Mr Rush was unable to work because of his state of mind following publication and had fewer job offers since then.

Mr Rush did not give evidence saying “I am unable to work because of these articles” nor did he say he had received no or fewer job offers.

Mr Blackburn said the actor’s experienced lawyers made a “deliberate decision ” not to ask the question “because counsel feared to ask it because the answer might be unfavourable”.