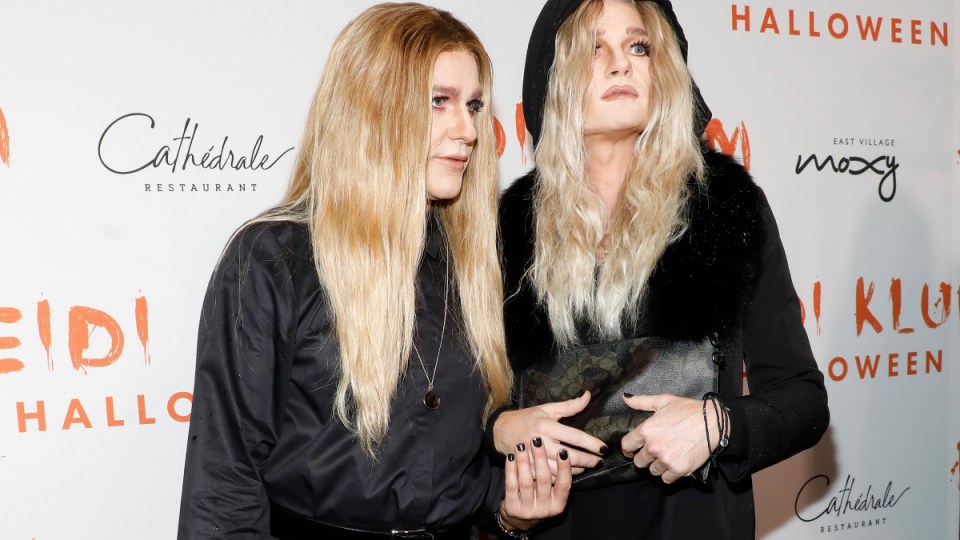 If Heidi Klum is the queen, then Neil Patrick Harris and partner David Burtka are the kings. This year, they went as the Olsen twins. Photo: Getty

Nods to nostalgic movies, societal references and just straight-up freaky stuff were the go-tos for celebrities dressing up for Halloween this year.

Every October 31, the bar is raised just that little bit higher, and the biggest A-listers always find a new way to out-spook each other.

But it’s becoming a lot more than just the outfit – it’s days of dropping hints via social media to finally doing thea big reveal with a video clip and photoshoot.

Heidi Klum, the undisputed queen of Halloween costumes, got transformed over the course of several hours, making it more of a Heidi-ween than anything else.

Then there’s Kim Kardashian West, who doesn’t do anything by halves.

Then she went even more retro for family Halloween, dressing the West clan as the Flintstones. Cute. And yes, Kanye is Dino.

This family pic was such a challenge because Chicago was so scared of Dino! LOL We tried to explain and show her that it was just daddy but she didn’t get the concept yet! So shout out to the photographer for editing her in & making our family Flintstones dreams come true!

As for other tropes, we saw a lot of celebs dressing up as each other. Jessica Biel definitely won this game. She dressed up as husband Justin Timberlake in his *NYSNC days – complete with the two-minute noodles hairdo.

Models and all-round beautiful people Maya Stepper and Mikkel Jensen pulled off the couples costume to a tee. They stepped out as Angelina Jolie and Billy Bob Thornton, circa 2000.

Massive props in the couples department also goes to Queer Eye‘s Antoni Porowski and newly cemented boyfriend Kevin Harrington, who gave a nod to iconic video chain Blockbuster, which was one of the many victims of the rise of streaming services.

Model Gigi Hadid broke out the face paint for a feature as Jim Carey’s The Mask. Kelly Clarkson also threw it back to a ripper of a 90s flick in Hocus Pocus.

#Repost @kellyclarksonshow ・・・ "Oh look. Another glorious morning. Makes me SICK!" It's just a bunch of #HocusPocus on today's #Halloween show 👻 ⁠ ⁠ We want to see YOUR costumes! Share your pics with #KellyHalloween -Team KC