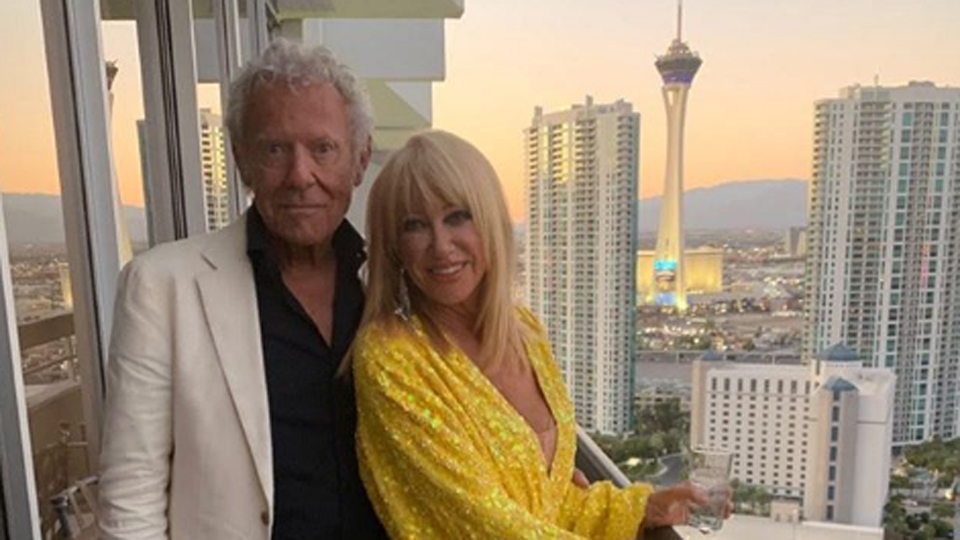 Suzanne Somers and her husband have been in the honeymoon phase a long time. The TV actress claims after 42 years of marriage, they still have sex twice a day, every day.

The star, 73, made the astonishing admission in an interview with the Daily Mail, saying “I’m kind of in that groove, like when you were younger and you’re in the mood all the time. And so is he.”

But Somers (Three’s Company, Step by Step) did reveal she and husband Alan Hamel, 83, get a little kick along from weekly shots of PT-141.

The drug is a melanocortin-based peptide that prompts sexual arousal.

“I thought, ‘Wow, what a great thing,” Somers said.

“Because men have had Viagra, but this is actually a shot for both men and women that’s not a drug. It just stimulates that part of your brain that says, ‘Hey, I’m kind of in the mood.’

Somers falls outside that category.

According to the FDA, patients should not use the drug more than eight times in a month and should be wary of side effects including nausea and vomiting, flushing, injection site reactions and headache.

My darling husband is wining and dining me for three days in Vegas. We’re here with friends Cynthia and Paul Rodgers of BAD COMPANY! What a birthday ✨💃🏼 Last night @ladygaga (check my stories), tonight #BADCOMPANY. So much fun 🥂

Somers reported none of the side effects but admitted that while she’s keen to get frisky with Hamel (whose Wikipedia page calls him a “Canadian entertainer, producer and TV host”) she sometimes finds it tough to stay awake for both daily rounds of sex.

“I usually say I sleep through one of them. That’s usually that one at 4 o’clock in the morning,” she said.

In 2017 Somers talked about intimacy with Hamel in her book Two’s Company: A Fifty-Year Romance with Lessons Learned in Love, Life & Business.

Spruiking the book to People, she said the pair’s sex life may not be for everyone.

“Every couple is different. This is just what works for us. Alan has the blood pressure of an athlete, and he claims that sex is his daily cardio workout and says that it’s a hell of a lot more fun than a treadmill.”

Somers said as well as their active sex life, she and Hamel “exchange electrons” by clasping each other while naked, a pastime that started early in their romance.

“I had sex with him on our very first date just in case there wasn’t a second one. I just wanted to be with him that first time.

Outside the bedroom, she said she and Hamel “give each other a lot of attention” and schedule date nights at least three times a week.

“We dance when we are alone. We are respectful of one another. We both value our good health. I never get tired of him. We laugh a lot,” Somers said.

The actress celebrated her birthday in October by sharing with her 112,000 Instagram followers an al fresco topless photo where she’s crouching in a grassy thicket.

The snap was taken by Hamel during a walk around the couple’s 29 hectare property in Palm Springs, California.

“We’ve lived in the same house for 43 years,” she told Page Six of the candid shot.

“We were wandering along one of the paths … and I took my top down. It was hot. The flowers were flowering, the bees were bee-ing. It just seemed like the right thing to do.”