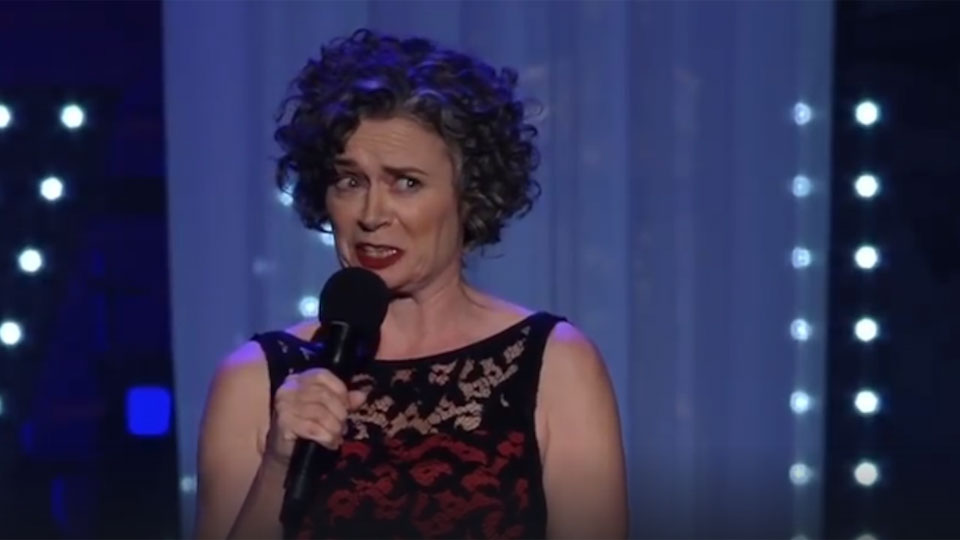 "I would watch the s--t out of that," said one fan of the chance to see Judith Lucy as the next Bachelorette. Photo: Facebook

An online petition for Judith Lucy to become Australia’s next leading lady on Ten’s The Bachelorette is gaining social media traction, but it’s hard to say if the comedian herself hearts the idea.

Children’s book author Nelly Thomas started the petition on change.org. It drew 1592 signatures of support in its first eight hours.

The idea came from a talkback caller to Virginia Trioli’s radio program on ABC Melbourne.

“As a single woman over the age of 30, Judith would be a relatable – but revolutionary – presence on a television dating show,” Ms Thomas wrote.

“And how fascinating the coterie of men interested in this Aussie icon would be!

“Judith is utterly bemused by this petition and has no idea what is going on, but she has given it the green light.”

Also saying he had Lucy’s permission, comedian Wil Anderson was among those supporting the push to get the 51-year-old dishing out roses and cheese platters amid the tea lights at the mansion. But Lucy’s alleged fondness for the idea of being a romality star in the footsteps of Angie Kent and Sophie Monk didn’t extend to her wanting to talk about it to The New Daily.

“No. She’s not available for press at the moment,” a spokesperson at management company Token Artists said, adding Lucy isn’t involved in her social media.

Intriguing. So is she just playing hard to get or shy about matters of the heart/business?

Certainly her romantic travails have been rich comedic fodder for Lucy in the past. Earlier this year she toured nationally with a stand-up show called Judith Lucy vs Men.

“I think after a certain age, women are really meant to hang their vaginas up, or at least not really talk about the fact that they’re still sexual,” she told ABC’s News Breakfast last October, saying she was considering giving up relationships but not necessarily men.

Lucy had “a bad break-up” that made her reflect on her history with men.

Duality spotlight: Judith Lucy ╰☆╮ Since 1989 Judith Lucy has been performing stand-up – all her shows have been utterly, achingly, ‘provide warnings to asthmatics’ funny. Rivetingly honest, with a gatling gun gag rate – no one sees just one Judith Lucy show. She’s the best-selling author of two devastatingly honest, hilarious books and created two of her own ABC series Judith Lucy’s Spiritual Journey and Judith Lucy Is All Woman both of which were nominated for Best Light Entertainment series at the AACTA awards. After being nominated for a third time, Judith became the proud owner of the 2015 Best Comedy Performer Helpmann Award for Ask No Questions of the Moth. Judith teamed up with good friend Denise Scott and created the critically acclaimed, smash hit stage show Disappointments. Together they won the 2017 Melbourne International Comedy Festival’s People’s Choice Award, performed a run at London’s Soho Theatre and sold out shows all over Australia. So basically she is really funny, anyone who sees or reads her agrees and they keep coming back. A simple but effective formula. . . . #duality2019 #judithlucy #dualityexperiment #ksrartbar #kingstreetrevival #melbournewritersfestival #whatsonmelbourne #melbourneevents #melbourneinternationalcomedyfestival #abcnews #artandculture #ilovelucy #andcushions

Not a fan of dating apps, she told News Breakfast in her twenties she paid $648 for sex with an escort because she thought it might provide good material for her career.

“It was just kind of like a really average one-night stand,” she recalled.

“The only thing he did that was a bit different was he actually carried me to the bed, which just made me feel like I was in that film An Affair to Remember after she had been hit by the car.”

In March Lucy told the Sydney Morning Herald she was “still a little bit vulnerable” after the sudden end to the five-year relationship that sparked her show about men.

“There are a couple of bits in the show where I’m even more open about the fact I’m really sad still,” she said.

Those scars would fit with the format of The Bachelor and Bachelorette, where dates are dedicated to talking about walls and vulnerabilities.

“Time to get this woman back in the game with some quality Aussie blokes,” pleaded Ms Thomas, who The New Daily contacted for comment.

“They’ll be lining up – and at their age they’re probably not even trawling for Insta followers!

“In entertainment, this is what we call a win-win situation.” “Is this a pitch to find Judith a date or to make an unwatchable show interesting?” asked one Facebook user.

Added another, “Isn’t she a bit too smart for this?”

If Lucy isn’t up for it, controversial 2019 Bachelor runner-up Abbie Chatfield said she’d have a crack: “I think it would be lots of fun.”