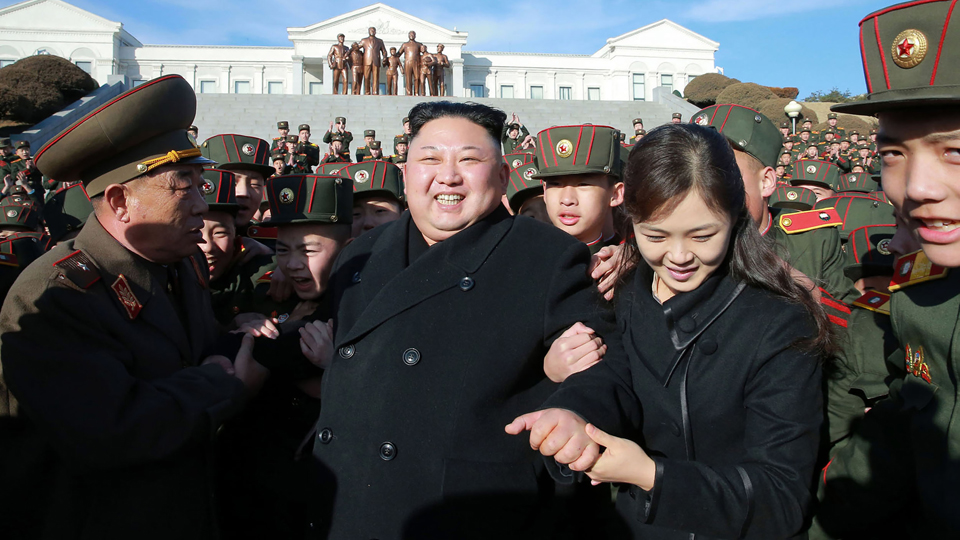 Waving a cigarette and sitting crossed legged on the side of a pool, a relaxed Kim Jong-un looked like he was contemplating a dip when he toured the natural springs of Yangdok County Hot Spring Resort in North Korea on October 25.

But reports suggest that apart from undertaking his aquatic pastimes, Mr Kim might also be wetting a new baby’s head.

Speculation that the North Korean leader could be a father – for the fourth time, possibly – kicked off when his reclusive wife Ri Sol-ju reappeared in public.

The outing at the resort of Mount Kumgang last week was the first time the First Lady had been seen since she and her husband were snapped marking national holidays in June.

Ri’s disappearance was interpreted by international watchers as a sign that she have been taking maternity leave.

While Meghan Markle and Prince Harry were criticised for not wanting to show off their son Archie immediately after his May birth, the North Korean leader and his wife take baby secrecy to an entirely new level.

No official news has been released by the state, and Myanmar-based North Korea expert Markus Bell told London newspaper The Sun that’s business as usual.

“The secrecy surrounding reports of Ri’s pregnancy is nothing surprising. The default mode for North Korea is poker-faced silence,” Mr Bell said.

“One thing’s for sure, Kim and Ri will be keeping their fingers crossed for a boy this time – a future supreme leader to hand over the reins to in years to come.”

It is believed Mr Kim and Ri have up to three other children who will be prepared to take over the dynasty, but no births have ever been confirmed.

The best intel ever to come out of North Korea about Mr Kim’s private life came via his chatty friend and frequent visitor, former basketballer Dennis Rodman.

In a 2013 interview, he mentioned a daughter named Kim Ju-ae.

“I held their baby Ju-ae and spoke with Ms Ri as well. [Kim’s] a good dad and has a beautiful family,” Rodman told The Guardian, referring to two other children whose names, age and gender have never been confirmed.

Mr Kim’s existence was only revealed to North Korean citizens nearly three decades after his birth.

Just as under wraps are details about his marriage.

Believed to be about 30 and the daughter of a professor father and doctor mother, Ri was first referred to by a North Korean news outlet as Mr Kim’s wife in 2012 when they opened an amusement park together.

Unconfirmed reports say she studied music in China and was a member of North Korea’s cheer squad for the Asian Athletics Championships in South Korea in 2005.

Ri has never spoken in public and is usually seen smiling enigmatically by her husband’s side at missile launches.

She accompanied him to a number of summits between North and South Korea in 2018, reportedly striking up a friendship with South Koreas’s first lady Kim Jung-sook.

North Korean propaganda has only referred to the mysterious Ri as First Lady since last year.

That’s a step up from her late father-in-law’s form.

He didn’t ever introduce his multiple wives publicly.