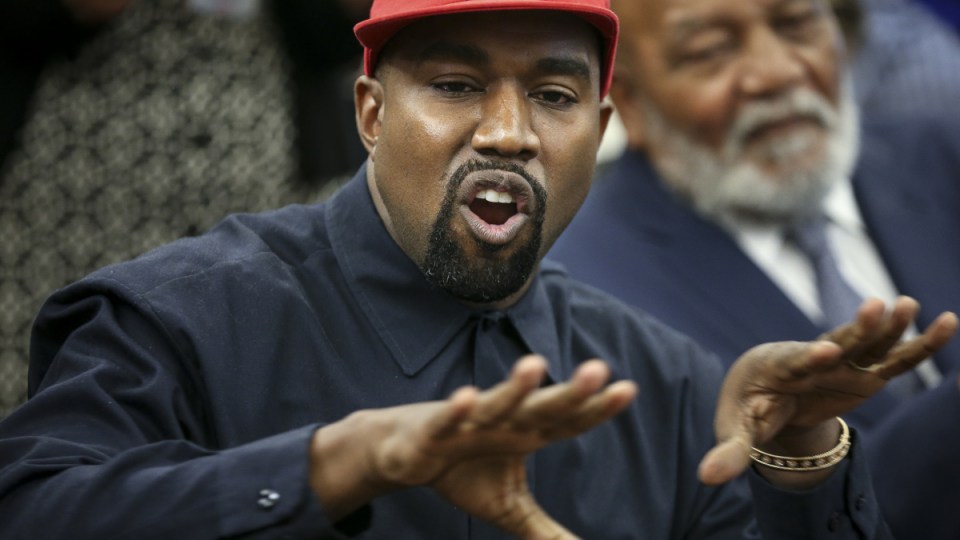 Kanye West has maintained his reputation for explosive interviews, in the promotion of his latest album. Photo: AAP

Kanye West has further cemented his controversial reputation, predicting he will be president of the US and revealing he tried to ban sex before marriage among those working on his latest album.

West revealed the information during an interview with Zane Lowe to promote album Jesus Is King, which was released in the US on Friday.

“There will be a time when I will be the president of the US,” West said in the Apple Music Beats 1 interview.

He followed that up with:  “I am unquestionably, undoubtedly the greatest human artist of all time. It’s just a fact.”

But while he’s still waiting for his election, West is happy with current president Donald Trump.

It’s no secret the rapper is a fan of Mr Trump – he’s been spotted many times wearing a Make America Great Again cap – and said they both shared “dragon energy”.

West, 42, didn’t hold much back. Talking about his Christian faith, he said he tried to ban premarital sex among the crew working on Jesus Is King, which did the trick in grabbing him headlines to promote the release.

He also revealed he was exposed to pornography from a young age and said he was addicted to sex following the death of his mother in 2007.

Donda West died at the age of 58 after undergoing cosmetic surgery and her death had a profound impact on the musician.

“Some people drown themselves in drugs, and I drown myself in my addiction: sex,” he said.

West, who owns the Yeezy fashion line with sportswear giant Adidas, was taken to hospital in Los Angeles in November 2016, reportedly suffering from stress and exhaustion.

Reflecting on his struggles with mental health, he said: “We’re making this money but I’m still ending up in debt.

“My public standing is all in shambles, I’m not in good shape, I’m having ups and downs with my health, people calling me crazy, people not wanting to sit and meet with me – all this is happening and I had to give it all up to God.”

West began his career in music as a producer, providing Jay-Z with several songs. Asked by Lowe if he enjoyed his work more now or then, West replied: “I quite enjoy the sound of my own voice and apparently by the streams billions of other people do too.”

West, who has four children with his wife, reality TV star Kim Kardashian West, also spoke about the relationship between drug use and alcohol.

Asked if he was OK with musicians using drugs in his studio, West said cannabis would be fine for medicinal purposes but drew the line at harder narcotics.

“We never have people doing hard drugs in our studios anyway,” he said. “I’ve never seen anyone doing cocaine in a studio of mine.”

Asked by Lowe if he had managed to “find peace” with the challenges in his life, including the death of his mother, West said: “I’m at peace. I give it all up to God.”