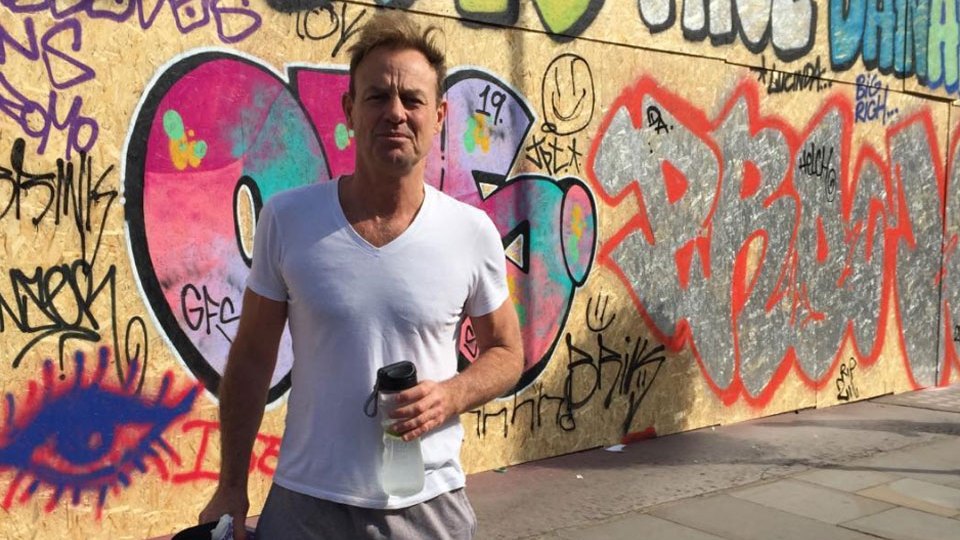 Jason Donovan (in Notting Hill on August 24) didn't stop to dress when he left his house to put out a fire. Photo: Instagram

As the London Fire Service quipped after Jason Donovan tackled a suburban fire in his underpants, “Everyone needs good neighbours.”

The fire brigade might have slightly muffed the words to the famous Neighbours theme song – Donovan starred in the soapie as Scott Robinson from 1985 to 1989 – but the Australian actor was spot on with his fire fighting skills.

“This is a good reason to always wear PJs to bed,” Donovan tweeted later.

The real-life drama unfolded when officers called to a fire in London’s upmarket Notting Hill realised the good samaritan already on the scene with a fire extinguisher was Donovan.

The 51-year-old lives across the road and sprang into action without bothering to dress after seeing flames from his home.

“When we arrived a gentleman was tackling the fire. We took over from him and quickly dealt with the blaze,” the crew’s watch manager Thomas Wolfe explained.

Mr Wolfe was asked if Donovan’s fast thinking would earn him a commendation.

“He looks good for his age,” he said.

Donovan posted to Twitter a snap of himself in his smalls tackling the fire, which broke out just after 4am on Sunday.

Its cause is believed to be faulty electrical cabling, according to reports.

Thank you to the @LondonFire for getting to the situation so quickly, glad no one was hurt. This is a good reason to always wear PJ s to bed ( in case of emergencies ) but much more importantly to have fire extinguishes at hand in the home. https://t.co/SlawIuRxwt pic.twitter.com/4rqGpSFZjh

The fire emergency is the latest twist in what has been a busy 2019 for the former Melbourne singer and actor and his wife Angela Malloch, who share three children.

This month he starts a 52-date Even More Good Reasons tour in the UK, and in July the couple’s daughter Jemma Donovan, 19, debuted as Harlow  Robinson on Neighbours.

She’s the third generation of the family to move into Ramsay St on the 34-year-old Ten soap. Jason’s father Terence Donovan played Doug Willis on and off for 16 years.

“Neighbours has been an incredible launching pad for so many careers… still going strong!!”

Jemma’s previous credits including starring with Downton Abbey’s Hugh Bonneville in BBC One film Mr Stink when she was 11, then the lead role in 2015’s 10-part Netflix series Spotless.

She said she was “happy and honoured” to continue the Neighbours family tradition.

Donovan himself has recently been back in the showbiz spotlight, playing Pharaoh in a revival of Joseph and the Amazing Technicolor Dreamcoat in London’s West End.

Thank you @josephmusical for the magic once again. Cast,crew, creatives and fans … AWESOME. I will never forget the class of 2019

It comes 28 years after he played the lead role in the Andrew Lloyd Webber musical.

He said he “didn’t have to think twice” about taking a supporting role in a show he previously starred in.

“I’ve been there and done that,” he told the BBC, calling the current production “a bit more modern and punchy” than the one he had success in.