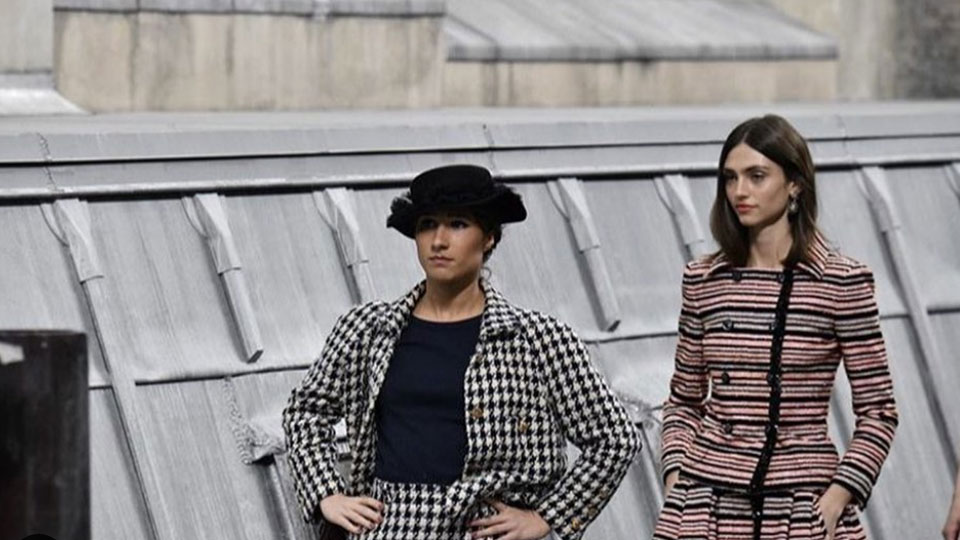 Hadid was legitimately walking in the French fashion house’s spotlit event on October 1 when a woman dressed in a Chanel-esque black and white houndstooth suit and hat climbed onto the catwalk.

The impromptu model, identified later as comedian Marie S’Infiltre – real name Marie Benoliel – joined in with professionals including Kaia Gerber as they paraded around the Paris rooftop-themed catwalk.

Doing an exaggerated walk, Benoliel managed to get most of the way around. She was so well camouflaged security guards at the Grand Palais couldn’t find her.

Vanessa Friedman, fashion director of The New York Times, tweeted footage of the bizarre interruption, calling it the “best Chanel finale ever”.

Best @chanel finale video ever: Spot the catwalk- crasher! And spot the security guys running after her! #PFW pic.twitter.com/Wztgsj3jVq

As Benoliel was really enjoying herself, posing with hands on hips, Hadid, 24, realised she as an imposter and blocked her way.

Stony-faced but composed, the US model put her hand on Benoliel’s shoulder and spoke to her before leading her away so Virginie Viard – Karl Lagerfeld’s successor at Chanel – could take her bow.

Gigi saves the finale of the Chanel show from a catwalk crasher! @gigihadid @chanelofficial

Other fashionista celebrity guests including US Vogue editor-in-chief Anna Wintour seemed amused by the gatecrasher’s antics and Hadid’s confident takedown. 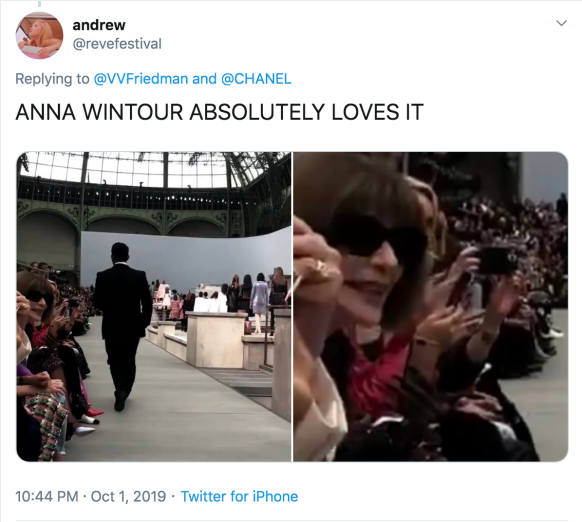 “We are not going to make a drama out of it,” a Chanel spokeswoman told the BBC of the incident, which looked more a publicity stunt than a protest.

Hadid hasn’t commented directly on her security work, but shared other people’s Instagram stories from the show including one post with the caption  “superhero @gigihadid”.

She shared it with an added gif of a winking cat woman.

In 2016, keen boxer Gigi was ambushed and lifted off the ground at Milan Fashion Week by Ukrainian Vitalii Sediuk as she left the Max Mara show with sister Bella.

She elbowed him and made him release her. Her reality TV star mother Yolanda Hadid applauded Gigi on social media: “Good girl”.

Benoliel is a YouTube comedian with 227,000 subscribers. Earlier in the week she crashed the Etam lingerie show.

She shared photos on her Instagram page of herself wearing metallic lingerie with a sleep mask walking behind model Cindy Bruna.

Her YouTube profile says she’s an ‘infiltrator’ and ‘usurper’ who is ‘encrusted without scruple’.

She explained on Instagram that she pulled the Chanel stunt after people asked her if the Etam invasion was faked because she heard “Pfff, too easy”, and that she felt it was also “low end”.

Wrote Benoliel, “So that’s too easy huh … So today I wanted to aim for the impossible: the Chanel show! Tribute to Karl Lagerfeld.”