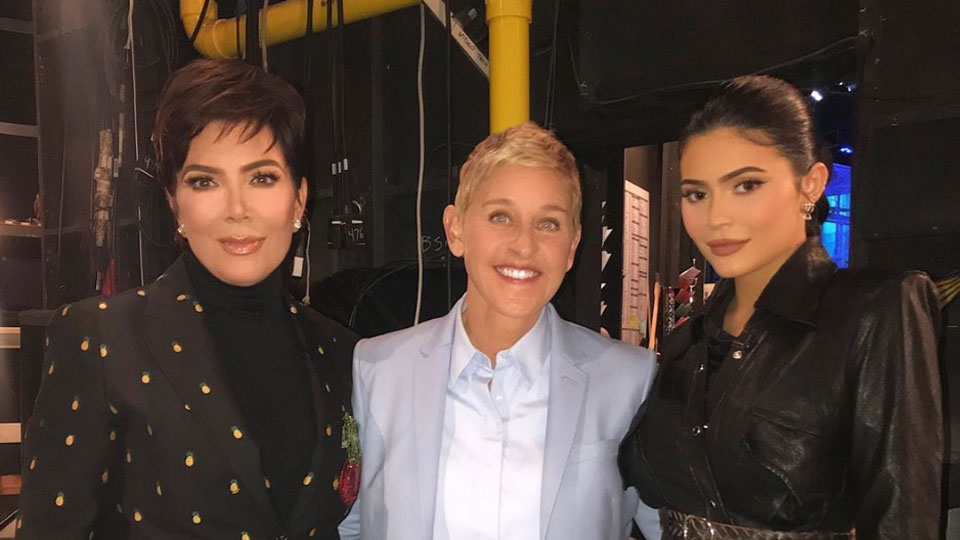 Kris and Kylie Jenner with Ellen DeGeneres on the US host's TV show on September 10. Photo: Instagram

There they were in an Instagram post, Kylie Jenner and her momager Kris Jenner, getting ready to wheel and deal.

In a quality field, the most extraordinary thing about the photo wasn’t Kris’ off-duty pimp hat, the black leather, the posturing, the rivers of diamonds or even the luxe private jet they were reclining on.

It was the bags they were casually showcasing.

Both Kylie, 22, and Kris 63, had on their laps Hermès white crocodile Himalaya Kelly bags, a style once deemed “the rarest handbag in the world”, according to Vogue.

The fashion site was just as agog at the sight of the twin bags as anyone else who knew their trophy accessories.

They reportedly sometimes come blinged up with diamonds and white gold hardware, although from the photo it’s hard to tell if Kris and Kylie has asked for theirs straight up or bedazzled.

According to Christie’s, the Hermès bag sported by reality TV star and businesswoman Kris and her youngest child was made “in the most limited of numbers”.

The global auction house considers it “both an heirloom and a work of art”.

Since 2015, Hermès has made a small number of these one-of-a-kind bags for their “top client” collectors, Christie’s said.

Anyone wanting to get their hands on the 30-centimetre accessory can find it listed on site Madison Avenue Couture – which claims to have one of the largest collections of “store fresh” Hermès bags anywhere in the world – for $223,000.

That’s chump change for Kris, whose personal wealth was estimated by Forbes in 2018 to be around $55.9 million (Celebrity Net Worth claims it’s more like $134 million.)

It’s even more just business as usual for Kylie, named Forbes’ youngest ‘self-made billionaire’ in 2018 when she was just 21 after launching Kylie Cosmetics from her garage with a limited run of lip kits.

The Hermès bag – this old thing? – is one of an estimated 400 that Kylie keeps in a dedicated room she and her architect created at her Los Angeles home to house her handbag collection.

Before she was wheels-up with her mother for their “meetings”, Kylie shared a photo of her favourite autumn bags with her 147 million followers.

Architect Martyn Lawrence Bullard co-designed Kylie’s wardrobes – one for her “regular everyday clothes”, one strictly for workout gear and one converted from a bedroom for the “incredible” bags – with her.

“There are at least 400 bags, mostly Hermès, lots of Birkin bags and then Louis Vuitton, lots of Chanel and some Dior and Fendi,” Mr Lawrence Bullard told People.

“Lots of them are collectors items. She’s bought some as investments and they’re treated like works of art.”

Kylie’s trip with Kris came after she was treated in hospital last week for an undisclosed illness.

She took to social media after a couple of days recovering in bed, thanking her body for “pulling through”.