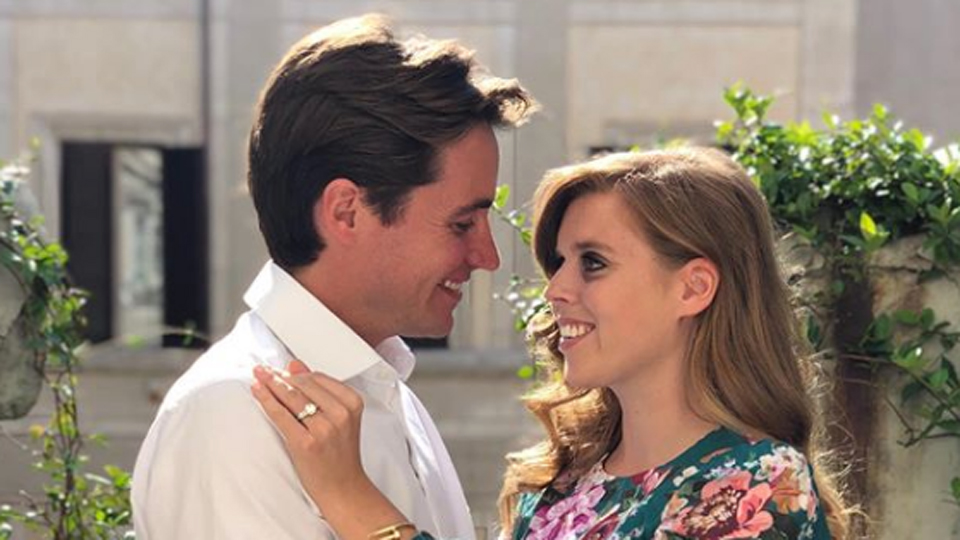 The British royal family has embraced modernity in all forms – social media, divorced actresses, nail polish – and now Princess Beatrice is stepping up to the contemporary plate with her engagement to Edoardo ‘Edo’ Mapelli Mozzi.

When Beatrice, 31, weds next year, she’ll become the first Windsor of her generation to become a stepmother, to Edoardo’s son Christopher Woolf, 3, known as Wolfie.

In terms of being ‘with it’, that probably trumps Princess Eugenie’s husband Jack Brooksbank being a drinks company ambassador.

The son of an Italian count who skiied in the 1972 Winter Olympics, Edoardo, 36, was engaged to Wolfie’s architect and designer mother Dara Huang in 2015.

The pair broke up “barely months” before he was first linked to Beatrice, according to the UK’s Daily Mail, which said “the split was so speedy the couple were still sharing a home.”

Ms Huang is said to have been surprised by her ex’s romance with a royal, but is now showing her own up-to-date vibe by supporting a Gwyneth Paltrow and Chris Martin style blended clan.

“I wish the best for Edo and Beatrice and look forward to uniting our families,” she said.

While the two have been a couple for only 11 months, their families have been close for years.

The bride-to-be’s mother, Sarah Ferguson, was once a secretary to Edoardo’s late stepfather, politician Christopher Shale, who died of a heart attack at the Glastonbury festival in 2011.

Beatrice and Edoardo “reconnected” in late 2018.

Before Christmas they were spotted leaving London private club Home House (separately) and made their debut public appearance at a New York gala soon afterwards.

In early 2019 they were snapped hand-in-hand on a beach in Lamu Island, Kenya, where Edoardo’s family have a luxe estate, then he was invited to the wedding of Lady Gabriella Windsor in May.

Now the wedding bells will be the pair’s own.

Their engagement news was accompanied by several photos – taken at Windsor Great Park by sister Eugenie – of the happy couple that have a Year 11 formal slightly awkward vibe about them.

Beatrice, in a floral midi dress by Australian designer Zimmerman, leans in girlishly to her fiance, who in his shirtsleeves looks like a 1940s cabaret dancer.

He showed a similar theatrical flair in his pledge to Beatrice on Instagram the day of the engagement.

“You will never be alone my love, my heart is your home,” he declared to her and his 14,000 followers, adding a ring emoji.

You will never be alone my love, my heart is your home. Hand in hand, today, tomorrow and forever. 💍 Photo Credit @misanharriman 🙏🏻

Less Latin but still personal was the couple’s statement that they are “both so excited to be embarking on this life adventure together.

“We share so many similar interests and values, and we know that this will stand us in great stead for the years ahead, full of love and happiness.”

In another series of black and white snaps taken by photographer Misan Harriman, the pair makes silly faces at each other and Beatrice buries her head in her man’s chest.

The relationship has been described as a “whirlwind” but its pace hasn’t bothered Beatrice’s parents, the Duke and Duchess of York, or Eugenie.

All three shared gushing posts after the engagement news was announced, saying it was “meant to be” and how lucky everyone is.

Beabea – wow! I'm so happy for you my dearest big sissy and dear Edo. It's been a long time coming and you two are meant to be. 📷 by me!! “We are extremely happy to be able to share the news of our recent engagement. We are both so excited to be embarking on this life adventure together and can’t wait to actually be married. We share so many similar interests and values and we know that this will stand us in great stead for the years ahead, full of love and happiness”

“Beabea – wow! ‘I’m so happy for you my dearest big sissy and dear Ed,” wrote Eugenie on Instagram.

Oddly, she said the engagement has “been a long time coming”.

Sarah, Duchess of York, was just as cryptic, saying on social media “I know what a mother feels so I have tears of joy.”

She and Prince Andrew, she added, are “just the luckiest people ever to have two great sons-in-law.”

Beleagured Andrew, who has been embroiled in controversy for months over his links to late pedophile financier Jeffrey Epstein, described Beatrice as “wonderful” and Edoardo as a “loyal young man.”

Buckingham Palace will announce more details about the wedding “in due course.”