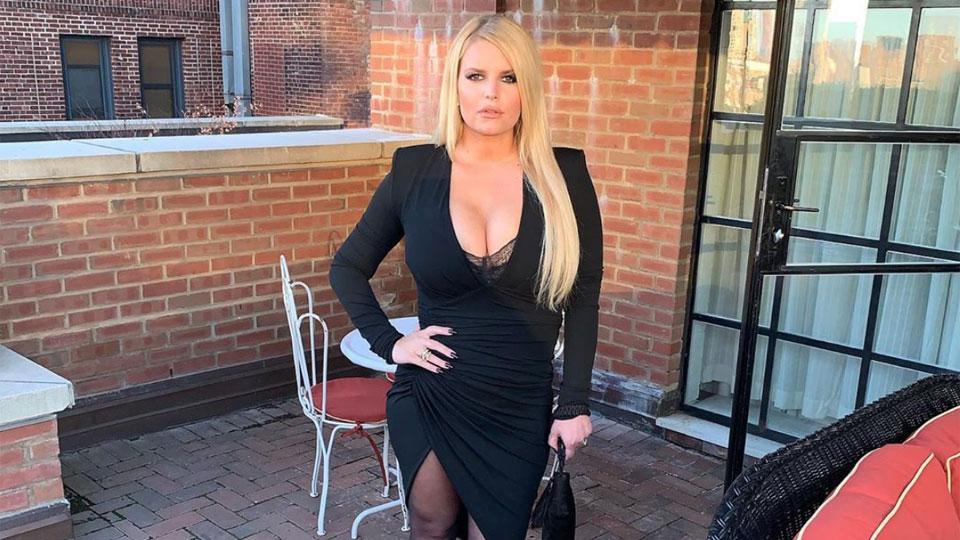 Jessica Simpson hits the town in New York on Wednesday for a girls' night. Photo: Instagram

Leaving her house for a work trip on Tuesday, Jessica Simpson – in a belted body con black dress, boots and oversized sunglasses – posted a photo of herself on Instagram.

“Six months,” she captioned it, saying in that time she’s dropped over 45 kilograms after having her third child.

The 1.61-metre Simpson revealed when she delivered daughter Birdie May in April, she weighed 108 kilograms.

“So proud to feel like myself again. Even when it felt impossible I chose to work harder.”

A day later the fashion designer posted another snap of herself in a plunging high-rise LBD, for a New York “ladies night”. And that did it – everyone wanted to know how Simpson lost her baby weight.

6 months. 100 pounds down (Yes, I tipped the scales at 240 😜) My first trip away from #BIRDIEMAE and emotional for many reasons, but so proud to feel like myself again. Even when it felt impossible, I chose to work harder. 💚

Turns out, it’s down to an unglamorous vegetable and a basic exercise.

“I discovered I really like cauliflower,” the former singer told People in July.

“Who knew it could be a substitute for almost anything?”

She said she was “working really hard” on feeling healthy: “It’s not easy at all, but I am determined to feel good.”

Simpson, who launched her career in 1999 as a singer with Sweet Kisses and is now worth an estimated $221 million thanks to her eponymous clothes line, also cut out junk food.

She ate three meals a day that were heavy on vegetables and lean proteins, and had two snacks like a handful of almonds or parmesan green beans.

As well as getting creative with cauliflower, the 39-year-old worked out with her go-to trainers Sydney Liebes and Harley Pasternak, whose celebrity clients include Kim Kardashian West, Lady Gaga and Ariana Grande.

But despite hiring a top fitness gun, Simpson mostly relied on the most basic exercise of all: Walking.

Still recovering from giving birth, she started with a 6000-step-a-day routine that saw her take phone calls and watch TV while on a treadmill, or take walks with her family.

Simpson gradually built that up to 14,000 steps a day.

“We had our work cut out for us and perhaps more so on this baby than the others,” Pasternak told E!Online.

“It had to be more than just getting back from her baby weight, but how do I keep whatever I am doing now forever. That’s why we are not a big fan of doing any extreme diet or radical forms of exercise.”

Just stretching it out in my rubber corset. The joy of postpartum 🤗

The trainer took to Instagram after Simpson’s social media reveal of her post-baby shape to praise her.

“Beyond proud of this incredible woman,” he said.

“After being non-stop pregnant for as long as I can remember … [she] looks younger today than she was when we met.”

Liebes added her praise for the “coolest, most hilarious, most hardworking” woman.

“You have worked your ass off and the reward is priceless!”

Simpson and her former football pro husband Eric Johnson 40, who wed in July 2014, are also parents to daughter Maxwell, 7, and son Ace, 6.

The star was open about the health issues she had during her third pregnancy, including anxiety, morning sickness and severely swollen ankles and feet.

“After a month of sciatica pain, followed by 3 weeks of bronchitis, I figured since my feet fit in my sneaks today I needed to walk out a lot of anxiety!” she wrote in February.

This week, the only anxiety she felt was leaving Birdie for the first time, she said.

Otherwise, “I am feeling very blessed and inspired,” Simpson wrote on Instagram.