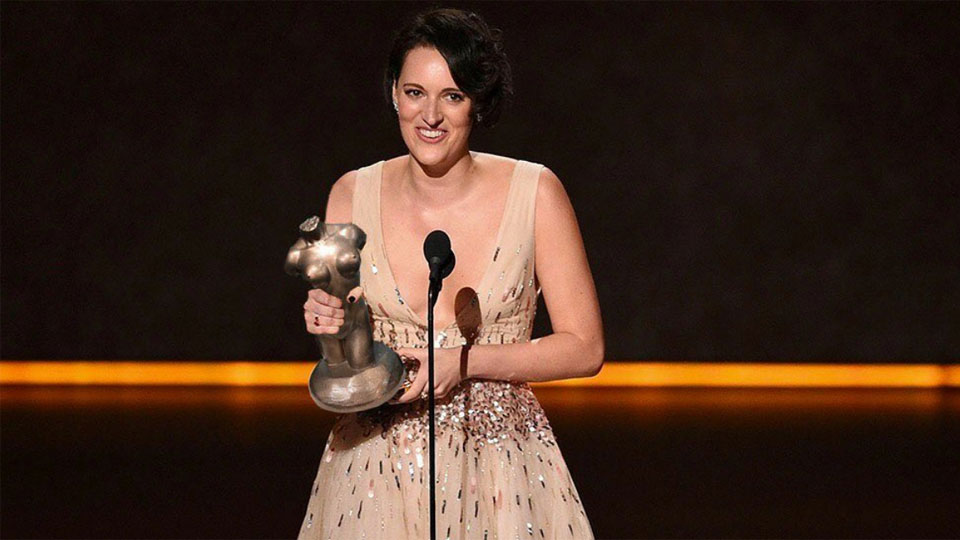 Hours after winning three Emmys, Fleabag’s Phoebe Waller-Bridge reclined in a chair at Los Angeles hotspot Chateau Marmont with her partner Martin McDonough, a martini in a coupe and her trophies piled over her Monique Lhuillier gown.

The winner of outstanding lead actress in a comedy looked like she had everything she wanted – success, love, a classy drink – but just a day later she scored something else fabulous: a major contract to make TV shows for Amazon.

The Killing Eve creator and new Hollywood golden child said she is “insanely delighted” with the exclusive deal, which Variety reported is worth nearly $30 million a year.

“I can’t wait to get going,” said playwright, actor and screenwriter Waller-Bridge.

Trouble is, she has a stack to get going on.

Apart from Killing Eve, Fleabag and her exec producing role on HBO’s thriller Run, the 34-year-old Londoner has been roped into beefing up the writing for new James Bond movie No Time to Die.

Her gig? To make the Bond girls feel “real.”

That shouldn’t be too much of a stretch for Waller-Bridge, whose meteoric rise to fame is due in huge part to her diamond sharp insights into the female condition.

In Fleabag, she plays a promiscuous, profane cafe owner whose adventures include – this is a now-famous scene – being caught by her boyfriend pleasuring herself beside him to footage of Barack Obama.

Her hugely non-PC jokes are often made to camera. As she and her sister enter an unfamiliar house in a strange neighborhood, “We’re going to be raped and die,” her sister says.

The middle child of a photographer father and mother who is a member of the Ironmonger’s Guild, Waller-Bridge grew up in London’s leafy Ealing (her cut glass accent attests to that) and starred in every play at her private girls’ school after beginning acting at eight.

She was obsessed with Blackadder (“honestly, one of the best jokes of all time is ‘Darling'”) and Absolutely Fabulous.

“They were just doing exactly what they wanted to do,” she told GQ in July, speasking of stars Joanna Lumley and Jennifer Saunders.

“I hadn’t really seen it before. They were just so surprising. People appearing like they didn’t give a f–k really appealed.”

After winning a place at the Royal Academy for Dramatic Art at 17, “there was a slow realisation that I couldn’t act,” Waller-Bridge told The Guardian in 2017.

“I was really young when I went in, and I really wanted to please. I don’t think you can be a good actor and want to please because so much about performing and acting is surprising people.”

After graduating, she was unemployed for two years and broke when she met Vicky Jones, later her Fleabag co-creator. Jones encouraged Waller-Bridge to write.

In 2007 they created theatre company, DryWrite. Waller-Bridge’s’ first play starred herself as a girl who kept breaking up with her boyfriend because she longed for someone more well endowed.

Audiences would shout that she was a slut. “It was then that I realised you just have to talk about penises as much as you can,” Waller-Bridge said.

She was still doing that in 2013 when her one-woman play Fleabag began garnering attention. Three years later, when it sold out at the Edinburgh Festival, the nihilistic take on modern life and love was picked up the by BBC.

In a domino effect, that knocked another of her scripts, Crashing, into production after it had been warehoused. Then Waller-Bridge was hired to adapt Luke Jennings’ Villanelle novellas into Killing Eve.

She picked up a Bafta, was hotly tipped to become the titular hero in Doctor Who (too busy) and appeared as a droid in Star Wars film Solo after never having seen a single minute of the space epic.

Behind the scenes, Waller-Bridge’s marriage to Irish documentary producer Conor Woodman ended quietly before she took up with her now-regular awards night partner, McDonagh (Three Billboards Outside Ebbing, Missouri.)

As to what her Amazon projects will include, you can bet they won’t be about well-behaved women.

Waller-Bridge, who isn’t on social media, has said “being proper and sweet” is “exhausting”.

“It feels like, recently, a lot of female anger has been unleashed. Articulated anger,” she told Vogue in 2018.