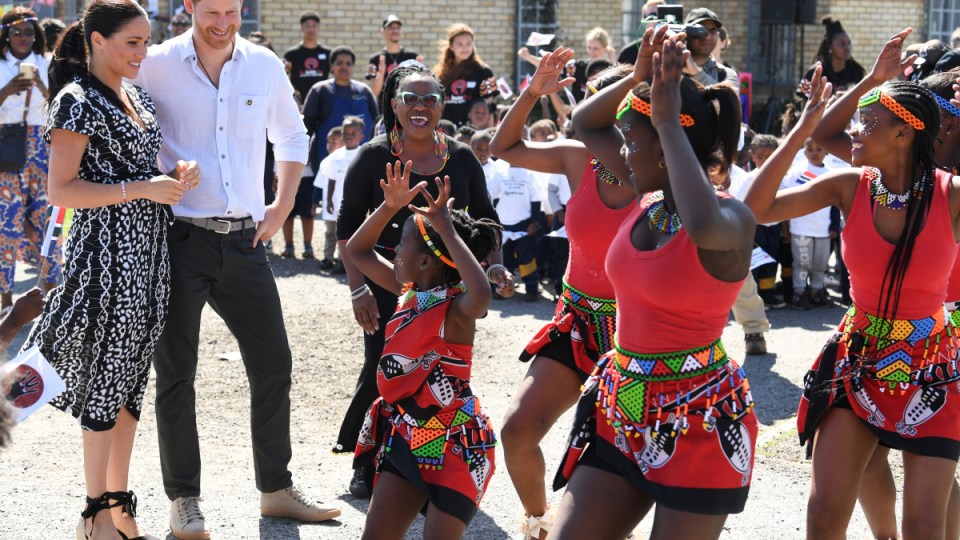 The Duke and Duchess of Sussex have begun the first leg of their African tour with a three-day visit to Cape Town before Prince Harry heads off on his own.

Prince Harry, his wife Meghan Markle and their four-month-old son Archie have arrived in Cape Town to kick off a 10-day visit to southern Africa in which Harry will follow in the footsteps of his late mother, Princess Diana.

The Duke and Duchess of Sussex, whose British Airways flight was severely delayed, were greeted on Monday in the township of Nyanga by children in brightly coloured traditional attire, singing and dancing to the sounds of a marimba band.

There was no sign of baby Archie as the duke, in a casual, unbuttoned shirt and the duchess, in a summery black and white dress and espadrilles, spoke to people in the community as they made their way to a children’s self-defence workshop.

Nyanga, a settlement outside the city of Cape Town, is one of the most dangerous areas in South Africa with recently released crime statistics revealing it as the murder capital of the country.

Many of the children meeting the royals there have been affected by violence in the neighbourhood.

According to the official schedule, the couple was to visit the District Six Museum to learn about how 60,000 people were forcibly removed from their homes during the apartheid era, when South Africa’s government tried to segregate the different racial groups.

The duke and duchess will then join a community cooking activity with former District Six residents at the nearby Homecoming Centre.

The British high commissioner to South Africa, Nigel Casey, told local broadcaster eNCA the trip was important for both countries, not only for trade and industry, but because of the social “ties that bind our two societies together”.

During their three days together in Cape Town, the couple will visit social and environmental projects and meet Archbishop Emeritus Desmond Tutu, a prominent anti-apartheid activist, as well as faith representatives and young leaders.

Harry will then travel alone to Botswana, Angola and Malawi, where he will do everything from planting trees in a natural reserve and witnessing an anti-poaching exercise to visiting HIV/AIDS projects.

An emotional highlight is expected to come in the Angolan province of Huambo, where he will visit the location of a famous picture of Princess Diana taken at a de-mining site in 1997. An orthopaedic centre she also visited will be renamed in her honour.

Harry will reunite with Meghan in South Africa on October 1, a day before they wrap up their trip in Johannesburg.

British media have reported that the couple might at some point consider moving to Africa, a continent they are both known to be particularly fond of. Harry took Meghan to Botswana soon after they first met.

“Africa [is] a region of the world that over the past two decades has been a second home to me,” Harry wrote on Instagram a few weeks before the trip, their first official tour as a family.

The couple, recently criticised for taking several flights on private jets, flew commercially for this trip.