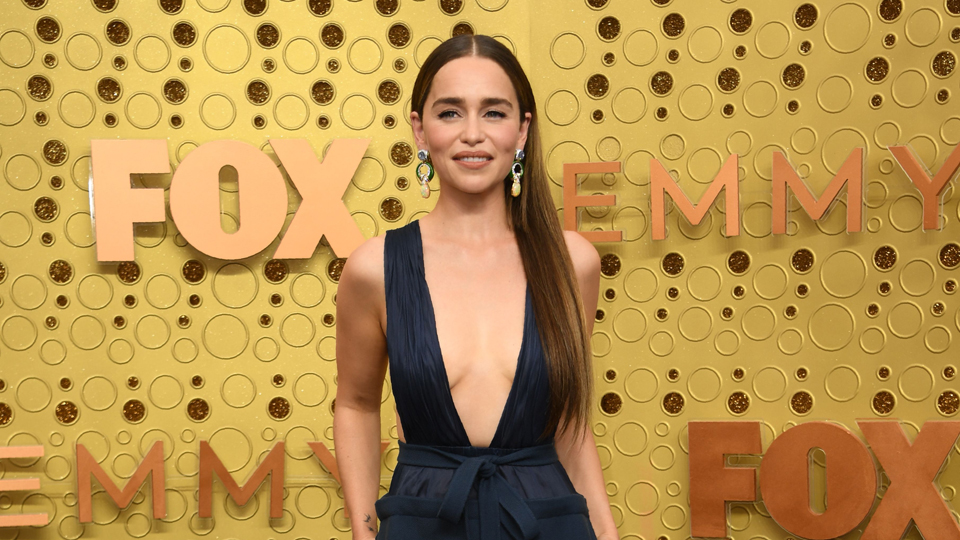 The Emmys 2019 purple carpet had a stack of everything – metallics, black and white, pants, princess gowns and sequins – but only one person in a costume.

Game of Thrones’ Gwendoline Christie rocked up to the Microsoft Theatre for the ceremony in a sweeping dress that looked like she’d raided the wardrobe department of a Roman Carry On film.

Naomi Watts’ Dior also knocked it out of the park, with the mesh bodice and belt a masterclass in how to make a ballgown edgy.

Jodie Comer killed it in a glamorous Tom Ford long-sleeved halterneck dress with a ’70s vibe.

Her Killing Eve co-star Sandra Oh got it wrong in a boring Zac Posen dress in a weird salmon mousse shade.

Alex Borstein also had a purple patch, in a 1940s monogrammed dress that suggested after the show she would be catching a flying boat to perform Boogie Woogie Bugle Boy for faraway troops.

Phoebe Waller-Bridge was a winner onstage, less so on the purple carpet in a pleasant princessy number that seemed out of sync with her hugely original personality.

Michelle Williams’ Louis Vuitton embellished column dress was like something a Bond villain in a Hong Kong casino scene would wear.

Lena Headey had less good fortune with her florals. The fabric looked cheap, the train obvious and the bow the wrong colour. I felt vaguely depressed by it.

But I felt uplifted by Kendall Jenner and Kim Kardashian! Kendall told Richard Quinn to make her a hybrid of something Sofia Vergara and Catwoman would wear. Kim asked for a Vivienne Westwood corset dress so tight she had to scowl all night. Done and done.

Catherine O’Hara deftly trod the line between quirky and silly in a Greta Constantine black-and-white column.

Viola Davis also went monochrome, in an architectural dress that was fun and chic.

Aya Cash’s show is You’re The Worst. Her dress was one of the best, a shimmering melange of disco style and effortlessness.

Annie Murphy also went for sequins but in more formal and been-there fashion. Sequins look best when they slither a bit, when they’re loose.

Rachel Brosnahan was another bright spark.

Carice Van Houten was right up there, with undone hair, a red lip and statement print dress that was modestly seductive.

Maya Rudolph opted for a current favourite, the floral granny dress whose total old-fashionedness is meant to be fresh.

Vera Farmiga went for the same look: The scarlet is better but it still has parallels to what Miss Beadle would have worn to a school knees up on Little House on the Prairie.

At first glance Maisie Williams was underwhelming but her cocktail-length prom dress is actually genius, with its balanced-out fluffiness and structure and those shoes.

Amy Poehler’s Greta Constantine wide-legged jumpsuit was hideous, like something a down-on-their-luck Elvis impersonator would opt for.

Laverne Cox was the unlucky nominated wearer of the inevitable ubiquitous doll-on-the-toilet-roll dress.

Kerry Washington’s take on sparkle was an Alexandre Vauthier shirt and pant with Siegfried and Roy overtones.

Betty Gilpin’s careless hair was a perfect foil for her old Hollywood gown.

Indya Moore was cartoonish in a double split dress with front zip and other terrifying details.

Zendaya’s Vera Wang sheer corset dress was astonishing and only faintly reminiscent of that bad stage on Say Yes to the Dress when every bride wanted to look like a Wild West saloon good-time girl.

Amy Adams had an old-fashioned shocker.

Christina Applegate’s dress was what my mother would call ‘tizzy’. Which is not necessarily bad.

Mandy Moore (in Brandon Maxwell, with terrific sleeves and a silky insouciance to it) was one of three women to clash red and pink together. You be the judge of who wore it best.

Catherine Zeta-Jones is always like a perfume bottle come to life in the sort of dress your husband says, ‘I like that’ while you know it’s striking but daggy.

Angela Bassett had the kookiest bag of the night.

Sarah Snook was swamped by her contemporary mother-of-the-bride pant and tricky top.

Laura Linney’s dress and pant combo was either ahead of its time or well after it.

Billy Porter promised to deliver and did.

Nathalie Emmanuel’s space-age bodice was confusing … is it a secret symbol to someone?

In her Saint Laurent, Robin Wright could have teamed up with Gwendoline Christie for a toga party. Too dreamy.