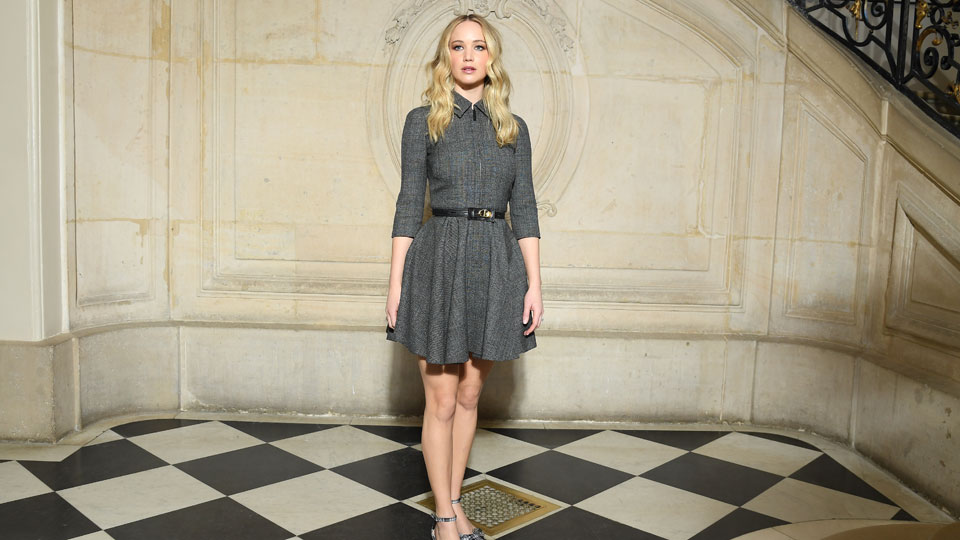 Oscar winner Jennifer Lawrence and her man Cooke Maroney headed out for a romantic dinner at New York hotspot Cookshop on Monday after they were spotted at the Manhattan Marriage Bureau.

What the couple ordered is known – oysters ($5.80 each, with cucumber mignonette & cocktail sauce) and a bottle of wine, according to a People source – but what is still a mystery days later is whether they were celebrating their wedding or just having a night out.

Buzz that the pair, who announced their engagement in February, wed in the Big Apple earlier this week was sparked by the visit to the marriage bureau.

They were photographed beaming outside, a smiling Lawrence (in jeans, a grey blazer and oversized sunglasses) holding “what appeared to be a document”, according to multiple reports.

Maroney was “covering” his wedding ring finger according to the New York Post’s Page Six, which broke the story.

The celebrity gossip site claimed the pair was flanked by two security guards, a friend and a photographer later identified as Mark Seliger, who has shot Mick Jagger, Gisele Bündchen and Miley Cyrus.

Questions about why anyone would take a photographer along to city hall for a basic administrative visit seemed to drive media outlets mad, with W, Vanity Fair and others speculating about what it all meant.

In a now-deleted tweet, a witness claimed to have seen the Red Sparrow actress and her fella at the bureau.

“When you go get your marriage licence and Jennifer Lawrence walks by to tie the knot before your eyes,” they reportedly wrote.

What is more clear is that Lawrence, 29, is nuts about Maroney, 34.

She started seeing him in June 2018 after romances with actor Nicholas Hoult, Coldplay singer Chris Martin and director Darren Aronofsky.

In June she called the art gallery director “the greatest human being I’ve ever met”, telling Catt Sadler on her podcast Naked with Catt Sadler, “he really is, and he gets better”.

Asked what she liked about Maroney, Lawrence said she started with the basics.

“He’s the greatest person I’ve ever met, so I feel very honoured to become a Maroney.”

Still Lawrence said when she met her fiance/possible husband she “definitely” wasn’t at a place where she was looking to get married.

“I want to legally bind him to me forever. And fortunately the paperwork exists for such a thing. You find your favourite person on the planet and you’re like, ‘You can’t leave’.”

In May, Lawrence’s stylists Jill Lincoln and Jordan Johnson shared to Instagram a photo of the star, wearing a dress designed by her cousin’s bridal brand L Wells and walking down a lit-up path at her engagement party.

“This weekend we toasted Jen and her groom to be. Too good of a time was had by all,” wrote the stylists.

Here she comes! We couldn’t be happier and more excited for #jenniferlawrence to become a #MRS.. this weekend we toasted Jen and her groom to be.. too good of a time was had by all.

The actual wedding would be relaxed, friends claimed.

“They are both very low key and down to earth and want nothing more than to avoid a ‘stuffy, pretentious’ atmosphere,” a source told Entertainment Tonight in June.

“Their vision is traditional with a relaxed and casual ceremony. They mainly just want to share their love with friends and family and to express their happiness to those closest to them.”

Lawrence told Sadler she’s been “too lazy to be neurotic” about the big day.

As to that, if the knot hasn’t been tied at the marriage bureau, Maroney’s parents, art dealer James Maroney and Suki Fredericks, own popular wedding venue and organic farm Oliver Hill Farm in Vermont.

The couple has reportedly been apartment hunting in New York.

“Jen and Cooke have a very happy, trusting relationship,” a source said.

“I can see them taking time out to travel together, with Cooke joining Jen on set.”