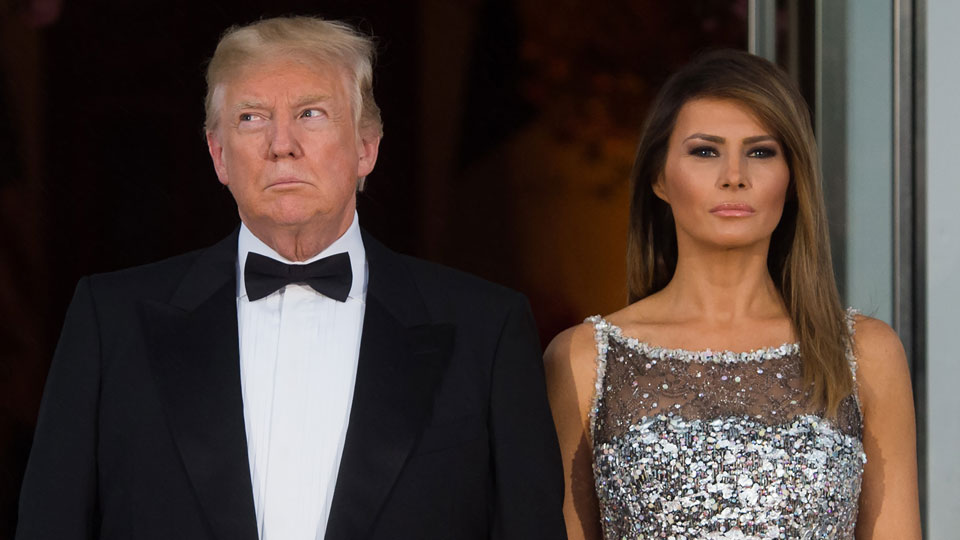 Melania Trump wore a recycled Christian Dior pantsuit to the ‘Medal of Freedom’ ceremony on September 16, and she’s incorporated that same canny spirit of upcycling into her just-finished redecoration of the White House.

The First Lady will showcase her interior design touches when she and her President Donald Trump welcome Australian Prime Minister Scott Morrison and his wife Jenny to 1600 Pennsylvania Avenue on Friday.

The Morrisons are just the second visitors to be afforded a prestigious state dinner for world leaders.

The Trumps hosted France’s Emmanuel and Brigitte Macron in April 2018, an event accompanied by fanfare and rival couture dressing.

Instead of just plumping cushions and strewing about some tea lights, Mrs Trump has gone all Better Homes and Gardens with her White House redecorations for the Morrison arrival.

Yes. According to Time magazine, FLOTUS used a fantastic decorating hack to give the Green Room new curtains: she simply switched material from the backside to the front and added a jazzy fringe.

Under Mrs Trump’s guidance, the Red Room has new wallpaper after sunlight streaming in left the old stuff “so faded it was almost pink,” said Stewart McLaurin, president of the White House Historical Association.

Part of Mrs Trump’s remit is to meet regularly with the chief usher, the head curator and other White House staff “to figure out what improvements should top the to-do list,” reported Time.

That saw Mrs Trump – who in May called the White House America’s “sacred landmark” – design a new rug for the Diplomatic Reception Room, the main entrance off the South Lawn, after the old one got shabby from overuse.

The replacement has a border showing the flowers of the 50 states, a touch added by the First Lady, according to Mr McLaurin.

On September 14, Mrs Trump shared a sneak peek to Instagram of the military rehearsals for Friday’s dinner, which will include a welcoming 21-gun salute.

Beautiful Saturday on the South Lawn of the @WhiteHouse. Members of the military are rehearsing for Friday’s State Visit with Australia. Thank you to all who serve our great nation!

The First Lady would have planned with her social secretary and staff for several months to sign off on everything from the invitations, entertainment and seating plan to flower arrangements (1500 cherry blossom branches and 1000 stems of white lilacs last time) and menu.

The Trumps will likely greet the Morrisons at the White House North Portico, then tour the Yellow Oval Room and historic rooms.

The foursome will then ascend the Grand Staircase to meet about 20 invited guests – think politicians and Republican donors  – then head into the State Dining Room for the dinner, which will meld American and Australian culinary histories.

The Macrons were treated to a goat cheese gateau for entree, rack of lamb and jambalaya for main, and nectarine tarts with crème fraîche ice cream.

At the last state dinner, Melania honoured her guests by wearing a gown by French house Chanel.

She may not wear an Australian designer this time, but Mrs Morrison almost certainly will.

Asked what she would advise the Sydney mother of two to wear for the glittering event, stylist and former Melbourne editor of Vogue Anthea O’Connor said she would go one of three ways.

“I love the idea of her wearing Carla Zampatti. Very appropriate on many fronts,” Ms O’Connor told The New Daily, singling out the designer’s $1249 navy velvet Hollywood Royalty ball gown.

“She would have needed the neck altered slightly because it’s very plunging, but the dress is a knock ’em dead Australian designer statement.”

Ms O’Connor also suggests a Zampatti “tux evening suit with wide leg pants” would do the trick for Mrs Morrison or a “custom-made Toni Maticevski dress or pantsuit, with his signature sculptural detail”.