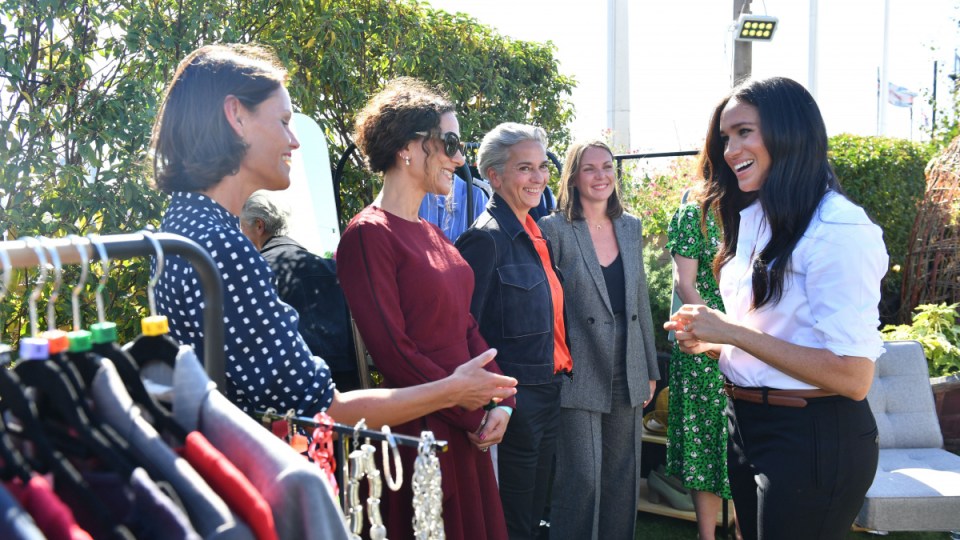 Clothes bought by shoppers will be matched as charitable donations to women in need by Meghan's new brand. Photo: Getty

Meghan Markle has urged women to champion each other as she launched a clothing collection for a charity that assists unemployed women.

The Duchess of Sussex stepped out wearing her new range which supports Smart Works, an organisation which trains and dresses unemployed women for interviews.

Already a leather tote bag accessory has sold out as royal fans wasted no time snapping up products associated with the popular Sussex royal.

The duchess said the community project reflected the work she and her husband Prince Harry would be doing in the future, when their Sussex Royal foundation is launched in 2020.

It was Meghan’s first official engagement since the birth of her son Archie in May and at the end she said: “I’ve got to get back to the baby – it’s feeding time.”

The Duchess of Sussex has launched the Smart Works capsule collection in London.

The charity, of which Meghan is Patron, helps women to dress and prepare for interviews by providing them with key workwear essentials.#DuchessOfSussex @SmartWorksHQ #MeghanMarkle pic.twitter.com/PdqKy4MliU

Speaking at John Lewis’s Oxford Street store in London – one of the project’s retail partners – Meghan laughed as she told guests that the tote bag had sold out, adding: “So that’s great.”

The duchess said the project would see an item from the range donated to the charity Smart Works for each one bought by a shopper.

She went on to speak about the ethos behind the initiative: “As women, it is 100 per cent our responsibility, I think, to support and up-lift each other.

“To champion each other so we aim to succeed, to not set each other up for failure, but instead to really be there rallying round each other and say ‘I want to help you’.

“And you may not ever meet that person, but you know when you put on that blazer or that shirt, or you carry that tote or put on those trousers and that dress, that some other woman on the other side of this country is wearing that piece because you made that purchase.”

The collection includes workwear essentials from an elegant blazer and well-cut trousers by Jigsaw, to a tote bag which fits all the essentials needed for an interview from John Lewis & Partners.

A classic dress from Marks & Spencer, and a crisp white shirt from the womenswear designer and friend of the duchess, Misha Nonoo, complete the range.

Meghan wore the blouse and a pair of the trousers by Jigsaw to the launch.

She finished off her look with a pair of butterfly earrings that belonged to Harry’s mother, Diana, Princess of Wales.

She said when she began thinking about helping Smart Works create its collection, the first person she thought about was her friend Nonoo, a designer known for her own capsule wardrobe offerings.

Meghan also wanted to pick “traditional and quintessential British brands” that would resonate with Smart Works’ clients and so chose John Lewis and M&S, and was drawn to Jigsaw because of an advertising campaign it launched that celebrated Britain’s diversity.

Half of Smart Works’ clients are from an ethnic minority, long-term unemployed and have been unsuccessful with a large number of job applications, but 64 per cent of those who receive training and an interview outfit from the charity get a job.