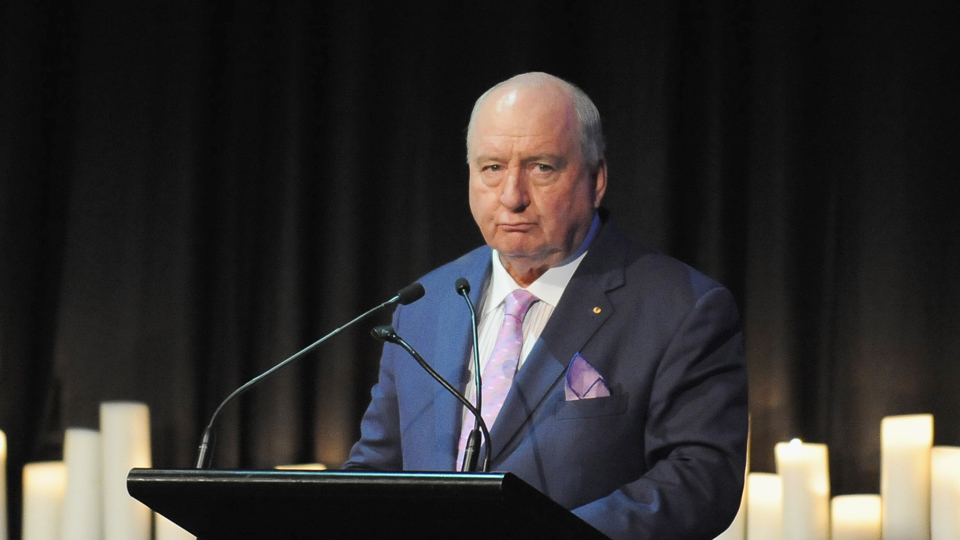 Sydney radio broadcaster 2GB has launched a PR campaign to apologise to its advertisers for Alan Jones’ on-air behaviour.

“We got it wrong,” Macquarie Media chairman Russell Tate told clients in a letter dated September 13.

Advertisers are also being offered meetings with management and Jones himself to discuss how the station can rebuild after a landslide of bad press thanks to the veteran shock jock’s conduct.

Mr Tate promised that while Macquarie staff would still “argue passionately” for causes, “we must do so in language and tone that all of contemporary Australia finds acceptable.”

The move comes on the day an expert report is due to advise shareholders whether or not to accept a $114 million offer from Nine Entertainment Co to take over Macquarie Media, which owns 2GB.

The letter is the next domino to fall after Jones’ latest controversy, which kicked off on August 15 when he suggested on-air that Australian Prime Minister Scott Morrison should “shove a sock” down the throat of his New Zealand counterpart Jacinda Ardern over her views on climate change.

The comments “fell below the community standards expected of us as [a] broadcaster”, Mr Tate wrote.

Forced to explain himself, Jones, 78, subsequently claimed he meant to use the less confronting phrase “put a sock in it”.

But community backlash saw multiple heavy hitting advertisers including the Commonwealth Bank and Coles hit the pause button on their media spend with Jones’ show.

“Throughout this incident, we have experienced the ability of offended groups to greatly amplify their complaints, and to actively disrupt you, our clients and your staff, who have done no more than seek to engage with the audience which chooses to listen to us,” Mr Tate said in his letter.

“Of course we have seen valued commercial partners withdraw from Alan’s program, but the fact is we got it wrong in the first place and we must now do everything possible to ensure that doesn’t happen again.” 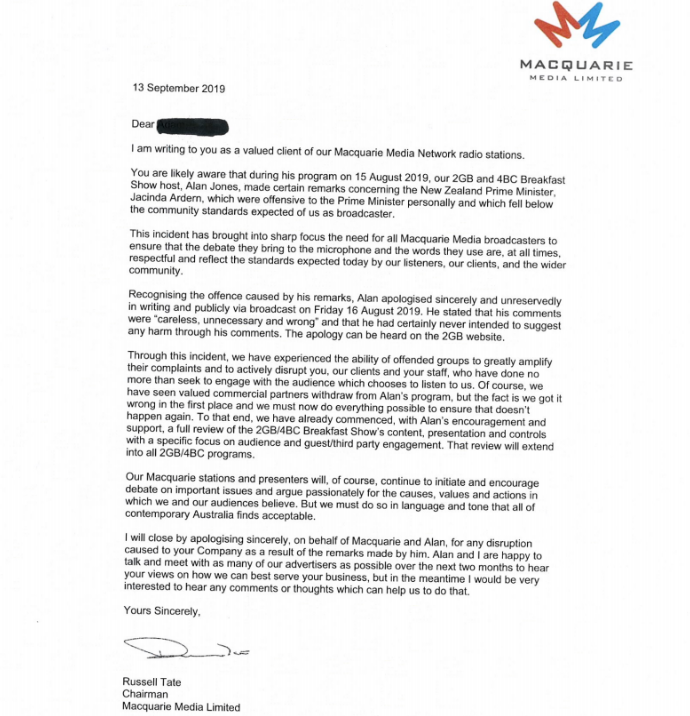 Jones has already been put on notice by Macquarie Media, which announced last month that his two-year contract – due to end in mid-2021 – will be terminated if he makes another blunder.

Mr Tate told advertisers the broadcast network is not just waiting for the next problem but trying to fix it first.

“To that end, we have already commenced, with Alan’s encouragement and support, a full review of the 2GB/ 4BC Breakfast Show’s content, presentation and controls, with a specific focus on audience/ third-party engagement,” he wrote.

The letter ended with the chairman “apologising sincerely” to its clients for any “disruption” to their business.

The New Daily understands over 100 brands have yanked advertising dollars from Jones’ show or said publicly they will not place ads with 2GB.

In the most recent radio ratings survey, 2GB in Sydney dropped 0.6 points from the previous survey but still had a market-leading 13.4 per cent.

Jones’ breakfast show lost 0.3 points but still led his rivals with a 17.1 per cent share.

Given Jones made his “sock” comments on August 15, “any real audience knock-on effects won’t be seen until the release of the next survey on 1 October.”