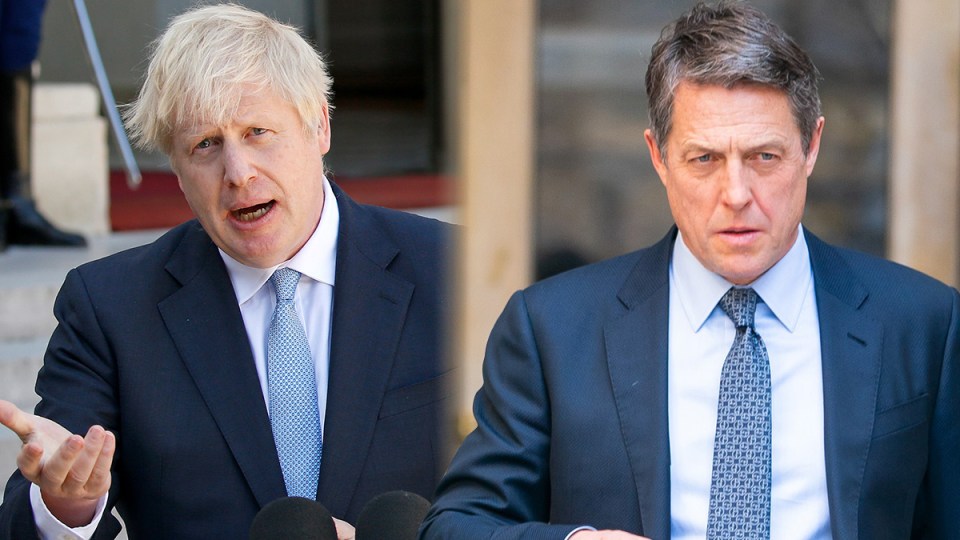 Actor Hugh Grant has launched an extraordinary profane broadside at British Prime Minister Boris Johnson for suspending Parliament for over a month just before the United Kingdom’s Brexit deadline.

“You will not f–k with my children’s future,” the furious father of five told his 349,000 followers in a now-viral tweet.

“You will not destroy the freedoms my grandfather fought two world wars to defend.”

Grant signed off with, “F–k off you over-promoted rubber bath toy.

“Britain is revolted by you and you [sic] little gang of masturbatory prefects.”

The Four Weddings and a Funeral star’s Twitter rant sparked a social media frenzy, with thousands of responses from other celebrities and regular bystanders.

Morgan followed up with another Twitter post featuring Grant’s mug shot from his 1995 Los Angeles arrest for having sex in a car with prostitute Divine Brown while he was dating actor Elizabeth Hurley.

Weep for Britain. A sick, cynical brutal and horribly dangerous coup d’état. Children playing with matches, but spitefully not accidentally: gleefully torching an ancient democracy and any tattered shreds of reputation or standing our poor country had left. 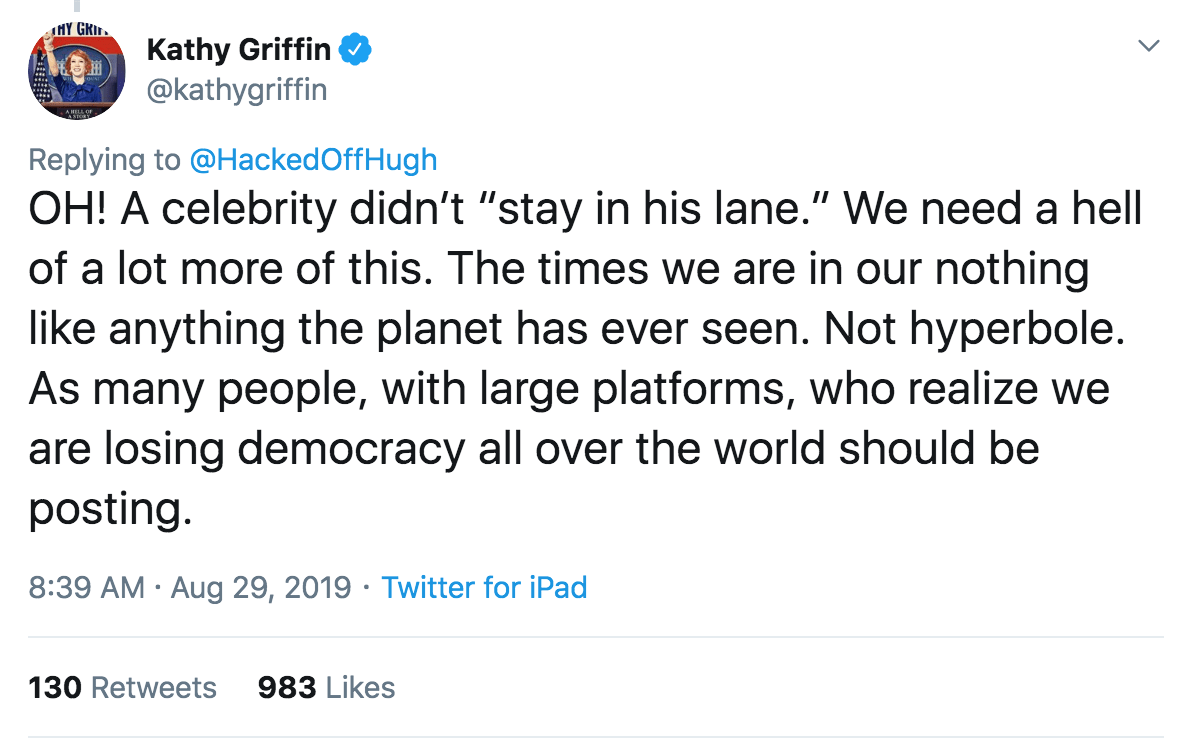 The Twitter thread was intense, with users writing claims – some apparently real, some outlandish – about war experiences to either support or parody Grant: 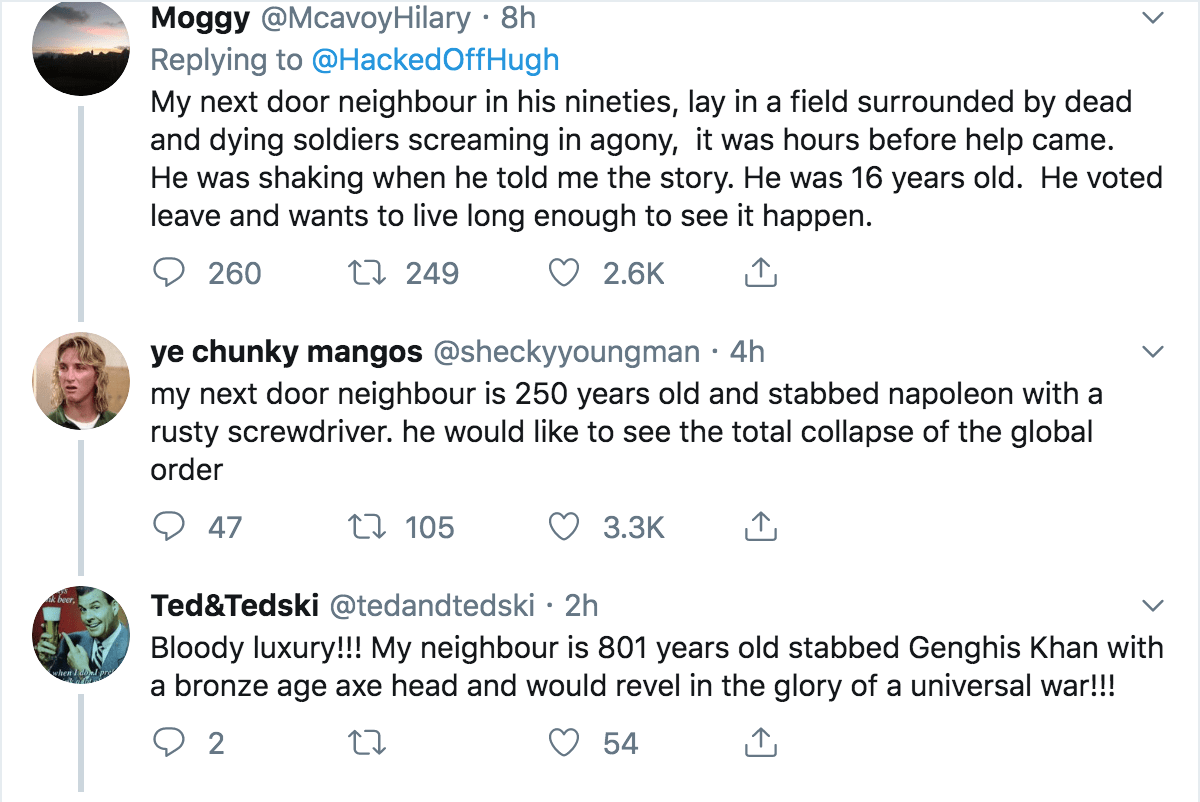 Other users reassured Grant they believe his children will be “better off than most anyway” and hundreds hotly debated the legalities of trade deals and treaties surrounding the incendiary Brexit.

“We voted to leave and that was the outcome. My father and grandfather did not fight to be under the dictatorship of some Belgium-based mafia … good old EU democracy at work.”

Replied a second: “Democracy? I don’t remember being given a chance to vote for this PM, sorry dictator.”

Some just wanted to have fun.

“Nothing hotter than a proper British man and his elevated swearing skills,” said one, using a GIF of Jennifer Lopez applauding on American Idol. Grant’s tirade came after Mr Johnson shared a video explaining why he suspended parliament in September after gaining the Queen’s permission.

“We’re not going to wait before October 31st before getting on with our plans to take this country forward” Johnson he said in his video, referencing the deadline for a Brexit deal.

“This is a new government with a very exciting agenda to make our streets safer.”

To invest in our NHS, deal with violent crime and cut the cost of living we need a Queen’s Speech. pic.twitter.com/xux9WIFL8e

Critics said the bombshell move was designed to prevent Brexit being debated. The five-week suspension is to begin on September 9 at the earliest and September 12 at the latest.

Mr Johnson is hellbent on exiting the EU by the October 31 deadline – with or without a divorce deal.

Amid talk of a constitutional crisis, incensed opposition MPs have written to the Queen asking for a meeting and urging her intervention.

Once parliament resumes, anti-Brexit lawmakers will have little time left  to try and keep Britain in the European union.

The move is a “constitutional outrage”, House of Commons Speaker John Bercow said.

“However it is dressed up, it is blindingly obvious that the purpose of [suspending Parliament] now would be to stop [MPs] debating Brexit and performing its duty in shaping a course for the country.”