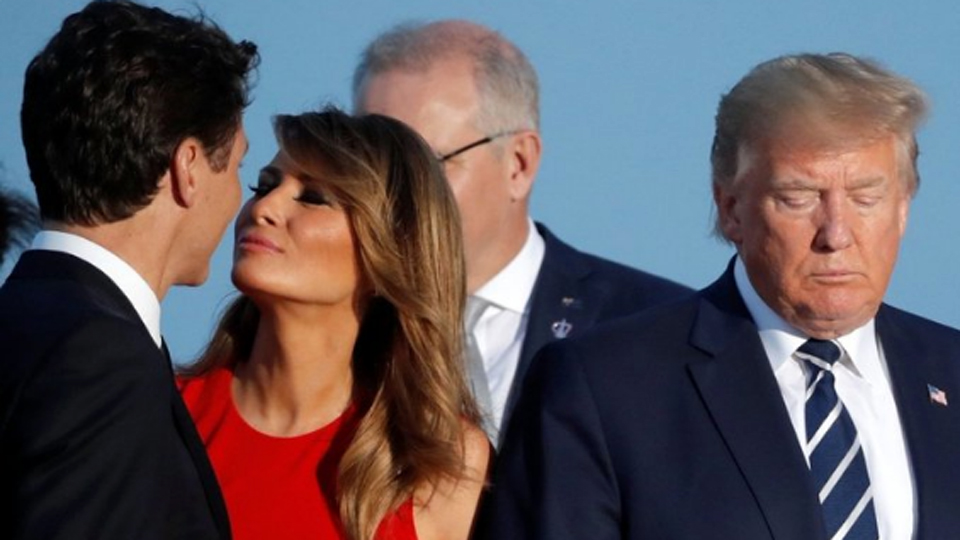 Melania Trump followed her own advice at the G7 summit in France and was best at fashion, best at being friends with other guests and best at turning a brisk political greeting into a headline-making smooch.

Important things first, and that would be Mrs Trump’s so-called “bedroom eyes” at seeing Canadian Prime Minister Justin Trudeau during a group photo opportunity at the G7 Summit in Biarritz, France.

Accompanying her US President husband Donald Trump, 72, to the August 25 event, a beaming FLOTUS lit up when she saw Mr Trudeau, leaning in in what was described as “seductive fashion” to kiss him.

Holding his wife’s hand at the time, Mr Trump seemed unaware of what was unfolding a metre away, but France’s First Lady Brigitte Macron actually goggled (and Scott Morrison had an unwitting cameo.)

Twitter memes soon included one with Mrs Trump and Mr Trudeau – who looked equally chuffed to see Melania – in a steamy embrace on the cover of a romance novel.

The world of international diplomacy is rarely the conduit for chemistry, but the former model, 49, and Canadian father of three, 47, have managed to jazz things up at their meetings.

In Toronto in 2017, Melania stroked Mr Trudeau’s arm before they embraced.

The same year, at an October sit down in the White House’s Oval Office, Mr Trudeau seemed awestruck by Mrs Trump’s formal pinstripe business attire. Mr Trump, not so much.

It could be that Mr Trudeau is catnip to Trump women in general.

Ivanka Trump, 37, seemed transfixed by the PM after a February 2017 day of White House meetings.

A photo of her “crushing hard” on Mr Trudeau (who has another celebrity fan in Kate Middleton) went viral.

But back to the G7, where social media pounced on the Melania and Justin moment.

“All I really want is a woman who looks at me the way Melania Trump looks at Justin Trudeau,” said one user in a common refrain.

Another user riffed the pair (despite only being two years apart) belonged in 1967 May-December romance The Graduate.

“@FLOTUS: Do you find me undesirable? #Trudeau – Oh, no, Mrs Trump. I think you’re the most attractive of all my parents’ friends.”

The Macrons showing Trump that he is "Respected around the World like No US President before" as Justin Trudeau's "Milkshake" brings Melania to the Yard. pic.twitter.com/uTqM7Utbzp

Mrs Trump’s electric seconds with Mr Trudeau were just one tiny grab of her FLOTUS poster girl turn at the summit, where she seemed to the outside world like the popular cool girl showing everyone the ropes.

After the fashion furore during her state visit to England where she largely ignored US and British designers, Melania boarded Air Force One on Friday in a Chanel tweed jacket with white jean and Christian Louboutin flats.

The nod to Gabrielle ‘Coco’ Chanel was probably deliberate: The famous designer opened her first couture salon in Biarritz in 1915.

Melania flew the US flag when she arrived on Air Force One on August 24 in a yellow and white Calvin Klein A-line dress with tie-dye detail.

Then she mixed up provenance: For a first-night dinner at the Biarritz lighthouse with Emmanuel and Brigitte Macron, she chose a nude Gucci maxi and silver heels. The Sunday photo call saw her in scarlet Alexander McQueen.

As their husbands got down to business on Sunday, Mrs Trump and fellow G7 WAGS – minus British PM Boris Johnson’s girlfriend Carrie Symonds, who stayed home in London – sipped champagne as they toured a Basque village.

Mr Morrison’s wife Jenny was among the party who saw a traditional dance and choir performance and posed outside a bakery during their ladies-only visit to Espelette.