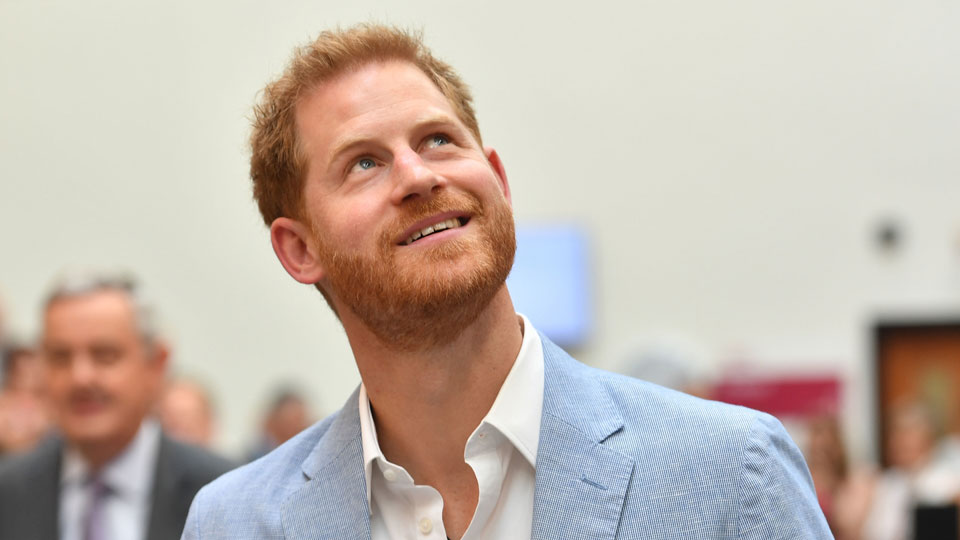 Prince Harry hits a Sheffield University to hear about its research projects on July 25. Photo: Getty

Days after being revealed as a participant in his wife Meghan Markle’s astonishing British Vogue issue, Prince Harry reportedly gave a ‘barefoot’ speech about the environment at the annual Google Camp.

Recent eco warrior Harry revealed in Vogue he and Meghan plan to have two children “maximum” to help save the planet.

He covered the same topic at the top-secret, celebrity-heavy party in Sicily, according to multiple reports.

Whether the Harry story is true or not (there’s been no mention on the Sussex Royal Insta account) only added to the intrigue of Google Camp, and inflated the claims of hot air and hypocrisy that surround the three-day climate change event.

“The Gulfstreams, mega-yachts and gas-guzzling Maserati SUVs used to ferry the wokerati around the seaside Google Camp have been spewing out greenhouse gases at the rate of small nations,” said The New York Post.

More than 110 jets are scheduled to land at the nearest airport in Palermo between now and August 4, reports local newspaper Giornale di Sicilia.

Without revealing the calculation method, the Post did the math for everyone, estimating the invitees’ flights would release at least 784,000 kilograms of carbon dioxide into the air.

Mr Page and Mr Brin created the event in 2012 as a private, better-dressed and boozier version of the World Economic Forum.

The mysterious bash is hosted at the Verdura Resort, close to the seaside town of Sciacca.

A quick dip in the pool and then sun, sun and sun! @octavie_prg #verduraresort #summer #mediterraneanbeauty #fantastic #sicily #pool @roccofortehotels

The five-star resort boasts indoor and outdoor pools, a private beach and an 18-hole golf course. Per its website, the most basic room costs $1451 for a night later this month (breakfast and ‘free spa access’ is included.)

While VIP guests’ identities are under wraps, actor Leonardo DiCaprio – who has his own climate change foundation – is said to be among their ranks.

Katy Perry was said to be a guest, although days earlier she was on a yacht in Ibiza, Spain where she posted a snap with music mogul David Geffen.

Buzz is that Bradley Cooper, Tom Cruise and Mark Zuckerberg are on the guest list, but former US president Barack Obama is a no-show.

“Even though social media posts are forbidden, the super yacht owners enjoy showing off their celebrity guests throughout the week’s activities and high-profile lunches,” reported Forbes.

The Verdura was chosen by Google honchos because of its proximity to Sicily’s UNESCO World Heritage ruins. Oh, and it has a helipad.

Among the yachts anchored off the beach at the resort are those belonging to German pharmaceutical mogul Udo J. Vetter and media titan Barry Diller and fashion designer Diane von Furstenberg.

Von Furstenberg was lucky to be invited this year after sharing a photo from last year’s camp, showing her lunching – all in levelling white T-shirts – with model Karlie Kloss and singer Styles.

Jeffrey Katzenberg, Oprah Winfrey, Evan Spiegel, George Lucas, Rihanna, Madonna and Emma Watson have all dropped in over past summers, according to reports.

So what happens at the camp?

Mornings mean “spirited discussions from education to human rights, how to extend human life and the design of cities of the future, all blending the greatest minds and visionaries,” said Forbes.

Last year, Google Camp rented out the nearby Valley of the Temples ruins for a sit-down dinner where Sting serenaded 300 guests.

This year Coldplay’s Chris Martin was reportedly the headline act.

“Anyway, glad someone is talking about how to halt climate change before we get to a catastrophic three degrees of warming. Imagine if Prince Harry and Leonardo DiCaprio figure it out,” said Vanity Fair.