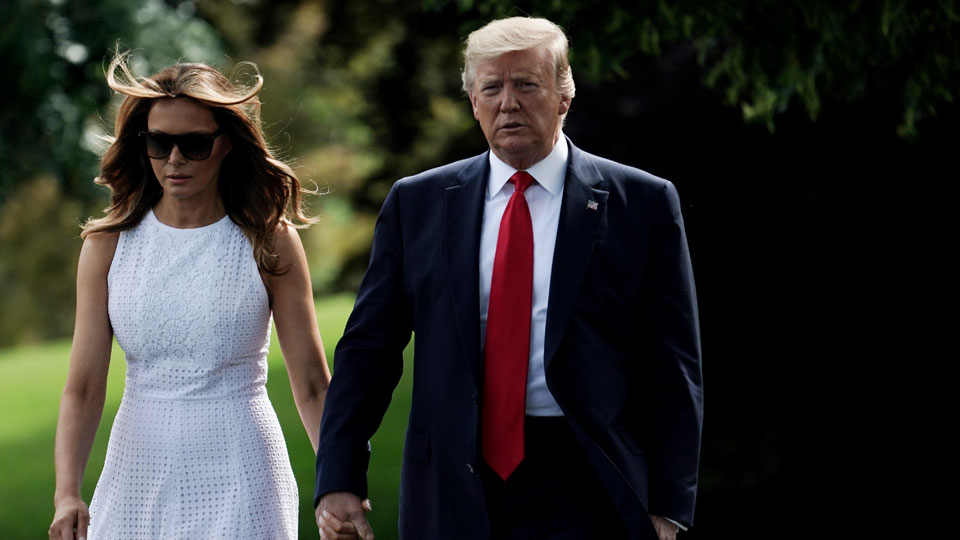 Melania and Donald Trump at the White House on June 18. Photo: Getty

As she dropped off to sleep at the White House on Monday, Melania Trump may have reflected on her mixed day.

She got to meet a world leader she clicked with, but also was caught up in a fashion spat with Vogue’s Anna Wintour that involved Michelle Obama.

It’s a lot, but two years into being FLOTUS, Melania knows how to take highs and lows in her stride.

Let’s start with the good news for Mrs Trump.

It’s not known if Melania was a fan of Mr Khan’s prowess back in his cricketing days, or if she just liked the cut of his diplomatic jib.

Usually an expert in the political poker face, she beamed while standing so close to the PM that his arm almost brushed her bust.

Mrs Trump even posted an Instagram shot of the meeting, saying it was “great” to welcome Mr Khan to Washington.

For FLOTUS social media watchers, the moment was extraordinary.

“Marry her if she looks at you like Melania Trump looks at Imran Khan,” said one person on Twitter.

While the natural endorphins of the meeting with Mr Khan hopefully lasted all day for the Trumps, Melania might have been brought down a touch by the Wintour brouhaha.

It kicked off when the American Vogue editor-in-chief was asked about Mrs Trump’s wardrobe during her recent state visit with Mr Trump to Britain and France.

Protocol for state visits dictates first ladies wear clothes – these days, often a mix of high street and designer – from either their own or their host country, to fly the flag for the fashion industries of both.

So while Melania wasn’t diplomatic in her style, neither was Ms Wintour in her answer.

She went straight to the subject of Mrs Trump’s predecessor.

“I think First Lady Michelle Obama really was so incredible in every decision she made about fashion,” she told a podcast by The Economist.

“She supported young American designers. She supported designers, indeed, from all over the world. She was the best ambassador this country could possibly have in many ways, obviously, way beyond fashion.”

The interviewer steered the subject back to the current First Lady: “What about the one you’ve got now?”

Wintour, who has refused since 2005 to feature Mrs Trump on the cover of Vogue, failed to praise Melania: “To me, Michelle is the example that I admire.”

The backhander from one of global fashion’s most influential voices was not remarked on by the White House, but Mrs Trump’s press secretary Stephanie Grisham responded in April to a past slight dealt to her boss by Ms Wintour.

“To be on the cover of Vogue doesn’t define Mrs Trump. She’s been there, done that long before she was First Lady,” Ms Grisham said.

“Her role as First Lady of the United States and all that she does is much more important than some superficial photoshoot and cover.

“This … shows how insecure and small-minded Anna Wintour really is.”