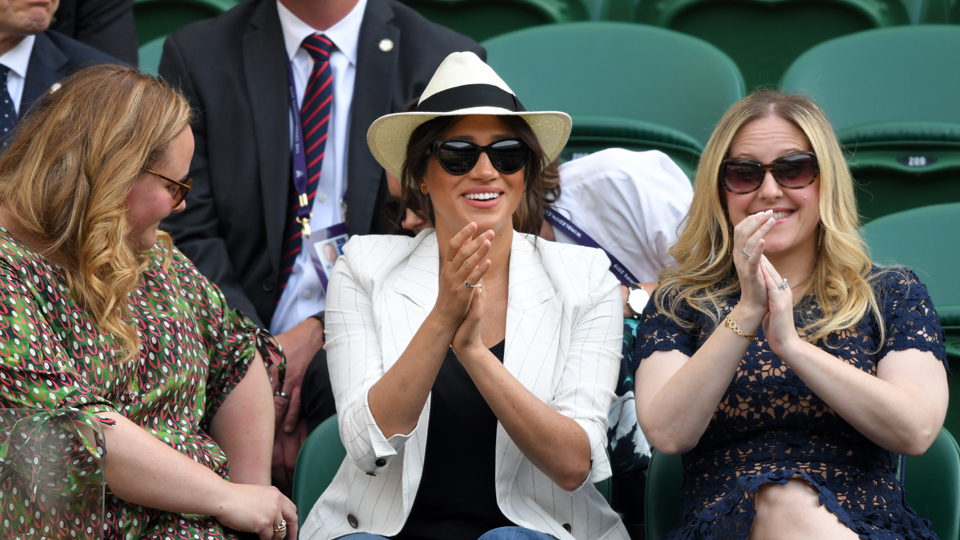 Out in public for the third time since son Archie's birth, Meghan Markle hit Wimbledon with friends on July 4. Photo: Getty

Two days before her son Archie’s controversial ‘private’ christening, Meghan Markle was ushered to the best seat in the house at Wimbledon’s Court 1 to watch Serena Williams in action.

The presence of the former actress’ American confidantes ignited speculation they will be among Archie’s godparents, although those details – like the actual dipping of Master Mountbatten-Windsor in the royal Lily Font – are being kept on the down-low.

A July 3 statement from Buckingham Palace said “the godparents, keeping with their wishes, will remain private”.

“The decision is a marked departure from traditional royal christenings,” said The Telegraph.

“Their son isn’t a ‘private citizen’. His godparents are a matter of public interest, having responsibility for his spiritual wellbeing.”

The palace confirmed the christening will be a “small private ceremony” conducted by the Archbishop of Canterbury in the Private Chapel at Windsor Castle on Saturday.

It also said Meghan, 37, and Harry, 34, “look forward to sharing some images taken on the day” by their wedding photographer Chris Allerton.

The confirmation the new parents will release photos to the media and on their increasingly deadly earnest Sussex Royal Instagram account – sepia, anyone? – did nothing to calm the heaving British bosom of discontent.

Critics, including church figures and celebrity enemies of Meghan, slammed the Sussexes for living off the public purse but not paying the piper, and for ignoring religious traditions.

“Baptism should never be private – it’s a public demonstration of God’s love,” the Dean of Chelmsford, Nicholas Henshall, told the BBC.

“This baptism should be public or the public should get their £2.4million ($4.3 million) back,” demanded TV host Piers Morgan, who constantly grinds his ‘ghosting’ axe with Meghan, referring to the cost of the couple’s recent renovations to Frogmore Cottage.

(Fact check: the renovations were paid for from the Sovereign Grant, which itself is funded by royalties paid to the Queen for her real estate portfolio, something an aggrieved public is finding hard to digest.)

But while much of the ire against the couple is directed at the duchess, 37, one royals commentator has defended Meghan and blamed her husband for the uproar.

“I think this is quite Harry-led and it is putting Meghan in a very difficult position,” Ingrid Seward, editor-in-chief of Majesty magazine, told MailOnline.

“She’s the one getting all the flak as a newcomer to the royal family.

“I assume Harry and Meghan don’t know where they are going wrong and think the criticism is all so very unfair.”

Still, Ms Seward couldn’t get on board with the Sussexes’ plan to release artful snaps of their eight-week-old in their own time, saying people want family shots of the seventh in line in his royal Honiton lace christening gown.

“They won’t want an arty Instagram shot of Archie’s foot three days later,” she said, referring to a Mother’s Day shot posted by Meghan and Harry.

But Harry and Meghan are sticking to their guns, with a friend of the duke telling The Times: “As Archie is not an HRH, [Harry] feels he has every right to strictly police his son’s privacy.”