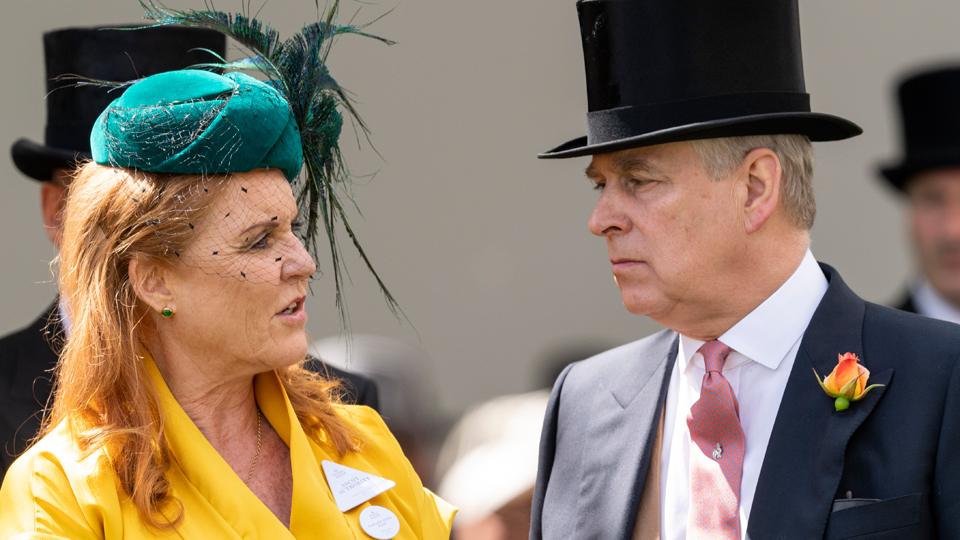 Strolling through Royal Ascot on June 21, Sarah Ferguson and Prince Andrew kept their heads close together, laughing and talking closely. At one point, Sarah broke off to wave to a friend, then the couple lost themselves in each other again.

Couple? Or not? Sarah and Andrew, both 59, officially ended their 10-year marriage in May 1996 after a staggeringly tabloid fallout, but divorce hasn’t stopped them still having the royal family’s most intriguing relationship.

After two decades on the freezing outer, Fergie is now so firmly back in the royal fold that since April, when Andrew took her on a work trip to Bahrain, royals watchers have called for them to remarry.

She keeps showing up at royal occasions, even the blue ribbon Trooping the Colour in June for the Queen’s birthday. So what’s going on with what Sarah has called “the happiest divorced couple in the world”?

So proud of @hrhthedukeofyork on parade today for The Colonel’s Review with @grenadier.guards at Horseguards and also my girls

The Yorks have lived together at the Royal Lodge in Windsor for the last 11 years, although Sarah said they’re both “in and out”. They own a ski chalet in Verbier, Switzerland, together. They have long celebrated family milestones with princess daughters Beatrice, 30, and Eugenie, 29, together.

“So many people have asked me that, but we’re so happy with the way we are right now,” Sarah said last November, when quizzed if she and Andrew would swap vows again.

“We enjoy each other’s company. We allow each other to blossom. I know it sounds like a fairytale but that’s the way we are.”

At Eugenie’s October 2018 wedding to Jack Brooksbank, the Duke of York brought his ex-wife to tears with personal tributes to her during speeches at the afternoon and evening wedding receptions.

“Andrew constantly talked about ‘Sarah and I.’ It’s clear that even though they are divorced they are very much a team. I think Sarah found that very moving and touching,” a guest told Vanity Fair.

Their connection at the wedding was strong enough to see the Daily Mail ask Sarah about Andrew.

“Although we are not a couple, we really believe in each other,” she said.

“The Yorks are a united family. My duty is to him. I am so proud of him. I stand by him and always will.”

Sarah has long been obtuse about why she and Andrew split in 1992, six years after their Westminster Abbey wedding. Five months on from the break-up she was snapped topless having her toes sucked at a French villa by Texan financial adviser John Bryan.

“We both agreed we didn’t fight hard enough to keep it together,” she said in an interview with Modern Hero published on YouTube last December.

She gave a more bizarre explanation to Michael Parkinson in 2008.

“I suppose I ran up a lot of debts and I needed to get out to work. You can’t be a member of the royal family and work in this country,” she said.

Pressed, she also admitted, “I think Andrew and I had our differences.”

For two decades, Sarah was banned from most royal family occasions, reportedly because Prince Philip believed she had disgraced the Windsors.

She made an animated appearance at the May 2018 wedding of Meghan Markle and Prince Harry but was still on the fringes of the family until Eugenie’s wedding.

Now reports say Philip “no longer cares” about black sheep Sarah, who joined her former in-laws for the wedding of Lady Gabriella Windsor in May.

But it was her Bahrain trip – her first royal duty in 25 years – and saying on social media how she was loving the “family time” with Andrew and Beatrice that sparked headlines.

Such a joy to be invited to attend the Bahrain Grand Prix with @hrhthedukeofyork and Beatrice. Excited to meet @frankiedettori_ #familytimes @f1 #luckyme

ITV’s royals editor Chris Ship insisted the getaway is proof the couple is back together, which in turn prompted a statement from Sarah’s press office: “The Duke and Duchess remain good friends as they have been for many years, and nothing has changed.”

A friend told Vanity Fair the pair don’t share a bedroom: “They are very close. I’d go so far as to say they love each other, they are just not in love with each other.”