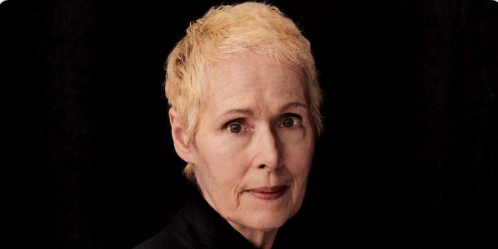 E.Jean Carroll wrote that she made a list of 'hideous men' in her life and that Donald Trump was one of them. Photo: Twitter

US President Donald Trump has responded to a high-profile advice columnist’s claims that he sexually assaulted her by calling for harsher punishments for people who make false rape accusations.

The threat, which came alongside his denial of the allegations, was met with widespread outrage and condemnation – FBI statistics show only about 2 per cent of all rape and related sex charges are determined to be false.

In response to the accusation, Mr Trump said: “I’ve never met this person in my life”.

Ms Carroll wrote that after what started as a friendly encounter with Mr Trump at Bergdorf Goodman in 1995 or 1996, the real estate mogul pushed her up against a dressing room wall, unzipped his pants and forced himself on her.

Ms Carroll said that in a “colossal struggle,” she pushed him off and ran from the store.

“Shame on those who make up false stories of assault to try to get publicity for themselves, or sell a book, or carry out a political agenda,” Mr Trump said in a statement.

“It is a disgrace and people should pay dearly for such false accusations.”

Meanwhile, people around the world have expressed anger over Mr Trump’s claims that women make up stories of sexual assault to get famous.

People criticizing E. Jean Carroll for processing her rape on her own time can go to hell. As if all of us didn't watch Brett Kavanaugh be credibly accused of rape and sexual assault last year and go on to be confirmed to the Supreme Court.

It took me 30 years to say something, and it was one of the hardest things I've ever done. Having the courage to come forward is not easy, and I can't even begin to imagine when the perpetrator is in a position of power like Donald Trump is. Love and respect to E. Jean Carroll.❤

In his statement, Mr Trump called the accusation “fake news” and said there was no evidence.

“No pictures? No surveillance? No video? No reports? No sales attendants around?? I would like to thank Bergdorf Goodman for confirming they have no video footage of any such incident, because it never happened,” Mr Trump said.

Here's a photo of them together. pic.twitter.com/1ROaiiPykw

The Trump Organization, which Mr Trump still owns, did not respond to a request for comment from The Associated Press, which has not independently verified Ms Carroll’s account.

Ms Carroll did not immediately return a call for comment.

Mr Trump has denied accusations of sexual misconduct made by at least 15 credible women.

Ms Carroll, now 75, wrote in her book excerpt on the magazine’s website that Mr Trump recognised her as “that advice lady” as he arrived at Bergdorf Goodman on Fifth Avenue just as she was leaving.

She claimed Mr Trump invited her to help him buy a present for an unidentified “girl” and she agreed.

Ms Carroll said that after Mr Trump suggested a purchase of lingerie or underwear, he grabbed a bodysuit and urged Ms Carroll to try it on.

After some joking around about which one of them should try it on, Mr Trump led Ms Carroll to a dressing room, where, she alleges, Mr Trump pushed her against a wall, pulled down her tights and assaulted her in an episode that lasted under three minutes.

Ms Carroll said there were no attendants in the dressing room area and she did not file a report with the New York Police Department.

She said she did, however, tell two journalist friends, one of whom urged her to contact the police while the other advised her to keep quiet, citing Mr Trump’s access to lawyers.

New York magazine said it confirmed the accounts of Ms Carroll’s friends but it did not identify either individual by name.

Meanwhile, in another alleged incident involving violence against women, police were called to the home of would-be British Prime Minister Boris Johnson and his partner, Carrie Symonds, in the early hours of Friday morning after neighbours heard them loudly fighting.

The argument could be heard outside the property where the PM hopeful is living with Ms Symonds, a former Conservative party head of press.

The day began with a video of Mark Field slamming Janet Barker against a wall. It ends with a recording of Carrie Symonds shouting “getting off me to Boris Johnson and E Jean Carroll accusing Trump of rape. Helluva day for violence against women, guys

Mr Johnson brushed off the incident, saying party members were not interested.

Mr Johnson to declined to answer questions on the matter at a hustings event in Birmingham, in central England, saying party members would rather hear about his plans for Britain than about the incident.

“I don’t think (audience members) want to hear about that kind of thing, unless I’m wrong,” Johnson said on Saturday when asked about the incident, to applause from the audience.

“I think what they want to hear is what my plans are for the country and for my party.”

It comes as dozens of women marched in Melbourne on Saturday in protest of men’s violence against women in Australia.

“We know that men’s violence against women is related to seeing women as less than them, and that reaching gender equality is paramount to changing this.”