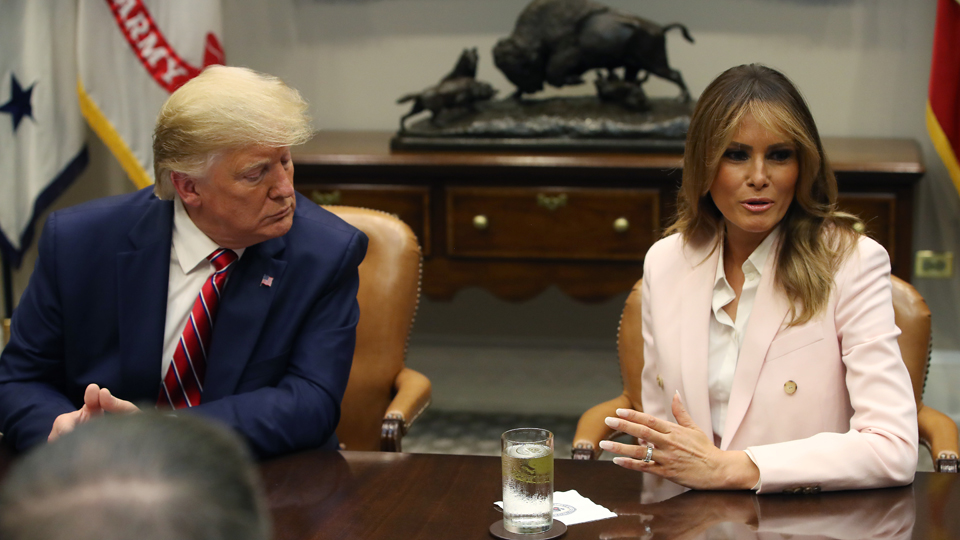 Melania Trump takes the floor as Donald Trump watches on at the White House on June 12. Photo: Getty

Melania Trump broke cover on Wednesday (US time) to do something she’s rarely done before in her two years as first lady: speak off-the-cuff to media outside of prearranged interviews.

During the Trumps’ state visit to the UK and France this month, Melania’s steely silence was noted by CNN, and perhaps the loudest she’s spoken was on the back of her infamous ‘I don’t really care’ jacket in 2018.

Mrs Trump changed the script with her unusually candid moment during before the visit of Poland’s President Andrzej Duda and First Lady Agata Kornhauser-Duda’s to the White House on Wednesday (US time.)

She and Mr Trump met the media in the Oval Office, where Mr Trump “did the talking”, as multiple reports said.

The president took questions about the Polish couple’s trip, noting that Melania and Ms Kornhauser-Duda were planning to spend the day together.

“Well, the first ladies know each other. They get along with each other,” Mr Trump said.

“They are going out to lunch right after this,” he added, then unexpectedly turned to his wife.

The first ladies weren’t actually going out for lunch but merely stepping into the Green Room of the White House for a cosy tête-à-tête, but Mrs Trump nodded anyway.

Then unexpectedly, Mr Trump turned to Melania: “Would you like to say something?”

Mrs Trump ran with it.

“It is great to have them here again,” she said, giving a shout out to Ms Kornhauser-Duda, said to be Mrs Trump’s favourite among the world’s first ladies.

As W magazine put it, “On the surface level, the comment is not noteworthy, but the fact that she said anything at all – and, even rarer, something apparently impromptu – is significant.”

Great to welcome back President Duda & Mrs. Kornhauser-Duda of Poland at the @WhiteHouse today!

The women’s relationship dates back to 2017, when Mr and Mrs Trump visited Poland to meet the Dudas. Last year, the visit was reciprocated and on that occasion, the first ladies had lunch in the Red Room.

“We’re looking very seriously at going back to Poland.”

In honour of their friendship the two couples then posed for a photo which looked like an album cover.

Apart from the photo op and planning future business trips, Mr Trump has had a busy last few days.

After the resignation of his press secretary Sarah Huckabee Sanders, Mr Trump took on the unofficial role of her publicist, tweeting that she would make a “fantastic” governor of Arkansas.

But it was another of Mr Trump’s tweets on Friday morning (AEST) which made more of a splash.

The president referred to the Prince of Wales, Charles as the “Prince of Whales” in a tweet insisting he would listen if a foreign government gave damaging information about a political rival without necessarily reporting it to the FBI. 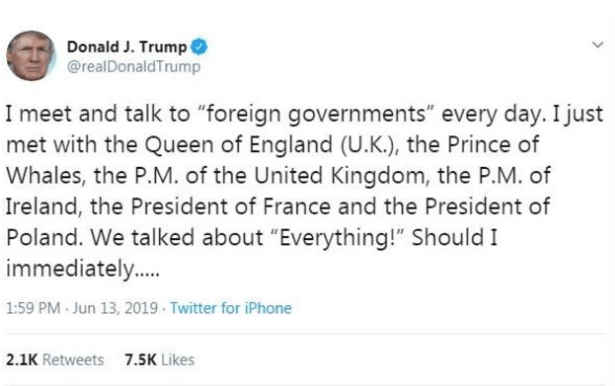 Mr Trump later corrected the spelling of the Prince of Wales but not before his gaffe sparked a wave of memes about what a royal whale would look like:

“The Prince of Whales” pic.twitter.com/YM4qzswAk7

First photos in from Trump's meeting with the Prince of Whales pic.twitter.com/MclQIT9G2A