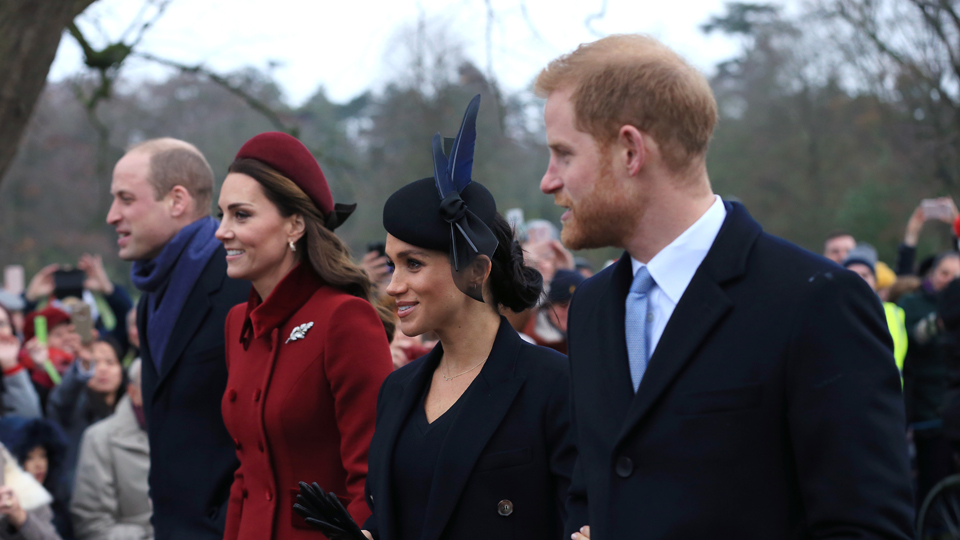 They way they were: Prince William and Kate Middleton with Meghan Markle and Prince Harry on Christmas Day 2018. Photo: Getty

Meghan Markle and Prince Harry are reportedly on the brink of cutting all professional ties with Kate Middleton and Prince William.

In recent months Harry and Meghan have split their household and office from Kate and William’s, but the couples still shared the Royal Foundation charity.

Now that last partnership may be dissolved, with the once ‘Fab Foursome’ thinking about breaking up the band for good, according to reports.

“Nothing has been formally ratified, but all the mood music is suggesting the Sussexes will break away,” a source told The Sun’s royals reporter Emily Andrews.

The unnamed source claimed while “the Sussexes weren’t in a rush to make any changes”, the Cambridges have been a driving force.

“There is a review under way” but “no decision has been taken,” a spokesperson for the Royal Foundation said.

Untangling the foundation would be “complex” because of William and Kate’s fixed “constitutionally-bound roots,” said the source. “It won’t be “an overnight chop.”

If going it alone is the future, Harry got plenty of practice this week in a frenzy of activity Vanity Fair reported had “something of a ‘#TBT’ feel to it”.

Certainly the Duke’s appearances took the world back to a pre-Meghan time, when Harry was a solo act on the royal engagement circuit.

Last weekend he jetted to Rome to swing a mallet in a polo match for his Sentebale HIV charity, where he tried to save the world a coffee cup lid at a time, according to an anecdote his teammate Nacho Figueras told on CBS This Morning.

At the hotel the men stayed at, Harry told staff he didn’t want a plastic lid on his coffee or his laundered shirts to be returned in a plastic bag: “Can we please not use the plastic?”

The Duke proved himself a man of the people again when he jumped on a commercial flight home after his first night away from son Archie.

In the check-in line, “I look over and see a guy who looks like Prince Harry, and he has a wedding ring on and looks very tired,” a fellow passenger wrote on Facebook.

“He politely smiled and said ‘Hi’ when he realised I knew who he was.”

An Insta post showing Harry in first class (he thanked the pilot and crew before he left) has since been taken down.

If he was tired, Harry didn’t show it when he dived into work after the Italian trip.

On May 29, he pulled a double-header double act with the Queen, greeting Cricket World Cup captains, including Australia’s Aaron Finch, then toting a top hat and umbrella to a palace garden party.

The next day, at the opening game of the World Cup, an unidentified “adorable mini-me” (as People called him) made such an impression he landed a spot on the world’s most aspirational Instagram account, Sussex Royal.

Meghan, meanwhile, has been hanging out with Archie and is said to have welcomed a stream of celebrity visitors to Frogmore Cottage.

Meghan’s close friend, tennis champ Williams, reportedly met Archie when she made a detour to the UK en route to the French Open, and Figueras also bowled up to Frogmore, saying Harry “couldn’t take his eyes, nor his hands” off Archie.

Keen random gardeners scored a peek at Harry and Meghan’s home when the grounds of Frogmore Estate opened to the public on May 28 for three days.

“It was mad how close you could get,” former Tatler features editor Sophia Money-Coutts tweeted.

She was underwhelmed by the location under Heathrow’s flightpath: “How they’re getting Archie to sleep is beyond me. Absolute racket.”

Down here for the day. Only open three days a year. Roughly a million policemen hanging about with guns and have already heard a chap say Frogmore Cottage 'doesn't look very nice' whereupon his wife shot him A Look. pic.twitter.com/TmuY1FlkQ2

While claims Meghan is planning to take Archie to New York in coming months are likely to be false, more credible are reports she’ll be back in royal harness at June 8’s Trooping the Colour.

“I hear that Meghan, provided everything is OK with the baby and herself, will be at Trooping,” royals reporter Omid Scobie said on his podcast On Heir.