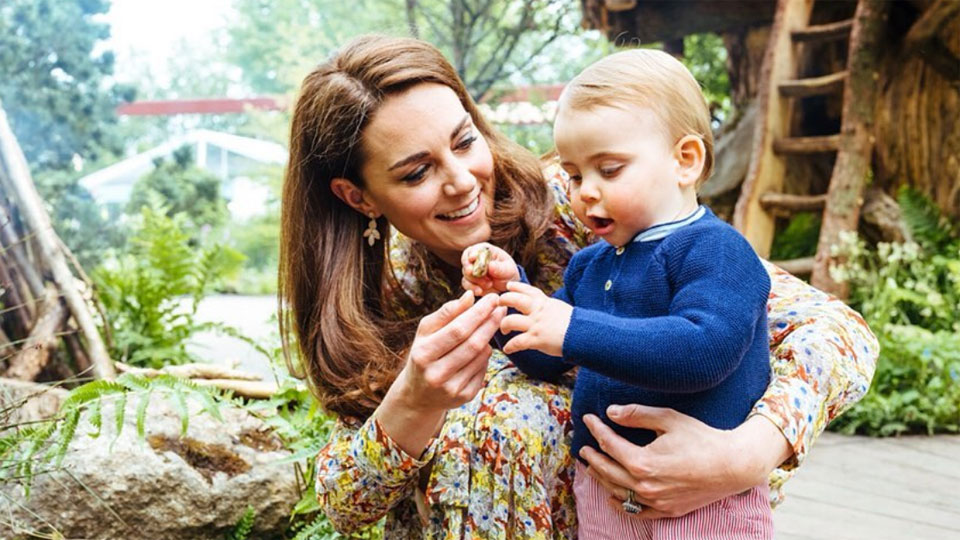 The Duchess of Cambridge with son Prince Louis at the Chelsea Flower Show on May 19. Photo: Instagram

With one lengthy reveal of their children playing in a confected garden, Kate Middleton and Prince William – House Cambridge – threw down the social media gauntlet to Meghan Markle and Prince Harry’s House Sussex.

It’s not quite the War of the Roses, but it has been dubbed ‘the war of the poses’.

While media attempts to invent a ‘feud’ between the Cambridges and Sussexes have fortunately died off since the real news of Archie Mountbatten-Windsor’s birth, there’s definitely Instagram rivalry.

In the less than eight weeks since PR masters Harry and Meghan launched their Sussex Royal Instagram on April 2, they’ve snapped up 8.3 million followers.

That means they’re fast closing on Kate and William’s Kensington Royal account – the Sussexes used to belong to it, until they broke up the band – which has 9 million followers.

While both camps of young, rich, beautiful and (blessedly) fertile royals still enjoy dropping into each other’s manors for a G&T and a catch up, they’re also competing in the same Insta space.

That meant, this week, it was time to bring out the big guns – and we’re not talking Kate and William showing up at Buckingham Palace garden party looking like extras in My Fair Lady.

For Meghan, 37, and Harry, 34, it was a montage of unseen black-and-white photos to celebrate their wedding anniversary (‘One year ago today …’) and gospel choir backing.

Happy one year anniversary to Their Royal Highnesses, The Duke and Duchess of Sussex! Today marks the one year anniversary of the wedding of The Duke and Duchess of Sussex. Their Royal Highnesses exchanged vows at St George’s Chapel within the grounds of Windsor Castle on May 19th, 2018. The selected song “This Little Light of Mine” was chosen by the couple for their recessional. We hope you enjoy reliving this moment, and seeing some behind the scenes photos from this special day. A message from The Duke & Duchess: Thank you for all of the love and support from so many of you around the world. Each of you made this day even more meaningful. Photo credit: Chris Allerton/Joe Short (B&W); PA (color) ©️SussexRoyal (B&W images and video)

There’s Meghan’s touching moment with her mother Doria Ragland. Harry looking like he’s simultaneously going over his speech notes and wondering where the nearest loo is. Beautiful!

Sadly there was no baby, but Harry and Meghan did go large with his tiny feet on Mother’s Day and are no doubt keeping their powder dry for Archie’s next reveal. Intrigue adds value equals winning.

The Sussexes cagily dropped their offering into followers’ feeds at 5AM (UK time) on May 19 – and thus deftly got the jump on the Cambridges’ flurry of Insta posts celebrating Kate designing a garden for the Chelsea Flower Show.

Kate, 37, and William, 36, have been notable for rarely sharing photos of their children Prince George, 5, Princess Charlotte, 4, and Prince Louis, 1. We’ve seen them only at family christenings, birthdays, weddings and first day of school.

But since the arrival of Sussex Royal and, coincidentally no doubt, Master Archie, that’s changed.

Suddenly we have a photo of the Duchess of Cambridge (still in those unfortunate wedges) emulating Miley Cyrus on the garden equivalent of a wrecking ball plus Louis walking.

Also – this is the absolute sign something’s up – the first ever audio of George speaking.

Yes! While we’re uber familiar with the young lad in his customary shorts, Start-Rites and long socks, he’s never been heard before. (Please correct me if I’m wrong. I want nothing more than to trawl back through Cambridge posts.)

And what did the future king say? He acquitted himself poorly. When asked by his father William what he would score his mother out of ten for her garden, George answered, “20.”

How many marks out of 🔟 for the #RHSChelsea Back to Nature Garden, Prince George?

Along with George’s vocal work, there were stacks of shots of the young royals peering delightedly into a fake river and exploring the verdant landscape.

So adorable it was easy to forget they don’t have vast tracts of family land complete with real salmon to explore.

Still, the photos from both Sussexes and Cambridges had the desired effect and both accounts saw their follower numbers rocket up.

Meanwhile, Queen Elizabeth, 92, hit up a supermarket. As always, the Queen – who doesn’t seem to be chasing social followers – was cool as a cucumber and not milking it for the cameras.

“You can’t cheat then?” she asked, as she was taught to use a self-service checkout.

Today, The Queen was taken back in time to Sainsbury’s stores from the past to celebrate the British retail chain’s 150th anniversary. The pop-up experience in London’s Covent Garden included a recreation of the very first store, founded by John James and Mary Ann Sainsbury on London’s Drury Lane in May 1869. It sold just butter, milk and eggs. Sainsbury’s 150th anniversary celebrations focus on the colleagues and customers who have helped shape the business over the years. Her Majesty met employees who have been involved in fundraising and volunteering in their local communities, and explored some of the technology which customers use today, including self-service tills. In the first image The Queen views a ration pack as presented by Lord and Lady Sainsbury and learns more about the work which was done with the government to develop the rationing process when goods were in short supply during the Second World War.

And the idea of a mobile phone app to pay bills didn’t faze the monarch who said it was useful.

But the Queen was surprised by some of the modern-day shopping basket items, including fish pie and curry ready meals.

“Porridge? Tastes have changed,” she said.