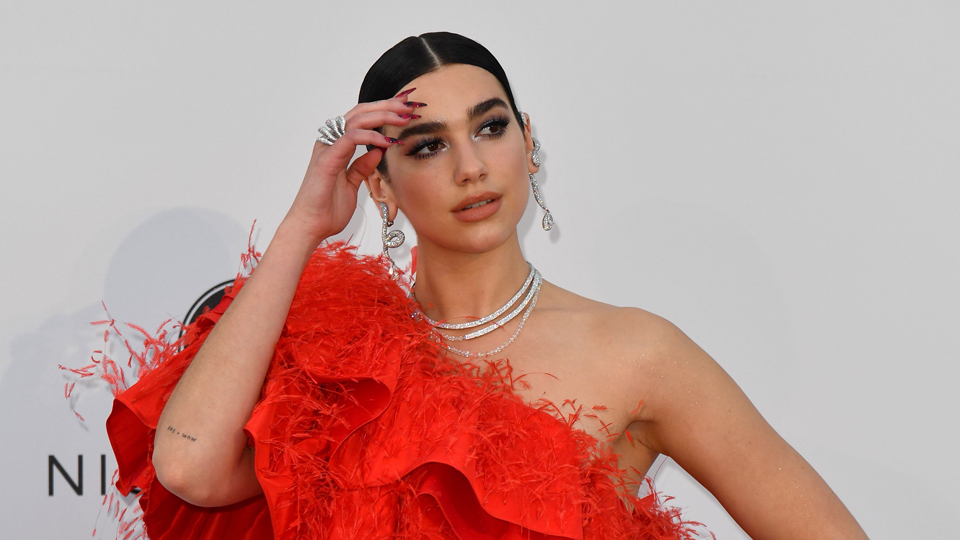 British songwriter Dua Lipa at the Cannes Film Festival's amfAR party at the Hotel du Cap-Eden-Roc on May 23. Photo: Getty

The annual amfAR Gala is always one of the Cannes Film Festival’s glitziest parties. This year didn’t disappoint: models in black minis played in a mock band onstage, celebrities and Euro influencers rubbed fake tanned shoulders and millions were raised for medical research.

But for anyone who has ever worried about showing up to a spotlit event in the same kit as someone else, the May 23 gala would have been anxiety inducing.

Stars arrived in waves in one 1990s throwback look: the mullet dress, a la Jasmine Stefanovic’s wedding gown. I know!

Kendall Jenner did it best, in gorgeous bubble gum pink Giambattista Valli X H&M. Of course, she’s not old enough to remember when it was the go-to of daring suburban brides in 1991.

Ana Beatriz Barros gave it a red hot shake too, in a longer version of the mullet complete with feathers and train.

Italian blogger Chiara Ferragni went a little bit Courtney Love back in the day, without the heroin. Quite fabulous, and those sandals are, as we would say in Cannes, beyond.

Chinese actress Li Yuchun, are you five? No? You’ve just come as the doll on my nanna’s toilet roll holder. Gotcha.

Model Coco Rocha managed to pull off a heady double: the mullet dress and the bubble skirt. That takes audacity and a lot of taffeta.

Strictly speaking, Russian fashion designer Dasha Yanina wasn’t in a bona fide mullet but certainly a version of. Her terrifying shoes may have been borrowed from that death metal act at Eurovision 2016.

Eva Longoria continued her love affair with the sheet artfully draped to appear like a couture dress. Her mullet had crystal embellishments to make it even more retro/cheap looking.

Olivia Culpo had the sophisticated version with a demure little gauzy bit that didn’t hide she was in a mullet. Divine sandals.

Then there was the crew who just wanted to show a bit off leg without going full Def Con 4 mullet. Hailey Clauson opted for the safe Hollywood go-to, the tuxedo dress and pretty much smashed it.

Jasmine Tookes was very sunshiny and quite boring.

Dua Lipa wasn’t dull in any way. She ran with a Spanish theme and managed not to look like it was a costume. Bravo.

Swedish model Elsa Hosk was fabulous. Not a feather or a tier or a split or a foaming skirt in sight, just gloves and cool puff sleeves and shoes which were cool without being kooky.

Izabel Goulart threw everything at it.

Not everyone stuck to the apparently-prescribed formula. Austrian entrepreneur Karolina Zubkova-Mattes was very Jessica Rabbit with cartwheel hat and dinky camera bag.

Influencer Maureen Kragt didn’t give a chic, as we could tell from her sandals. Beautiful colour.

Rolando V Lekaj’s Instagram calls him a “father, entrepreneur, model, philanthropist.” Mr Lekaj (with his unnamed wife) you are also an inspiration to anyone who ever felt they’d seen it all before. Astonishing.