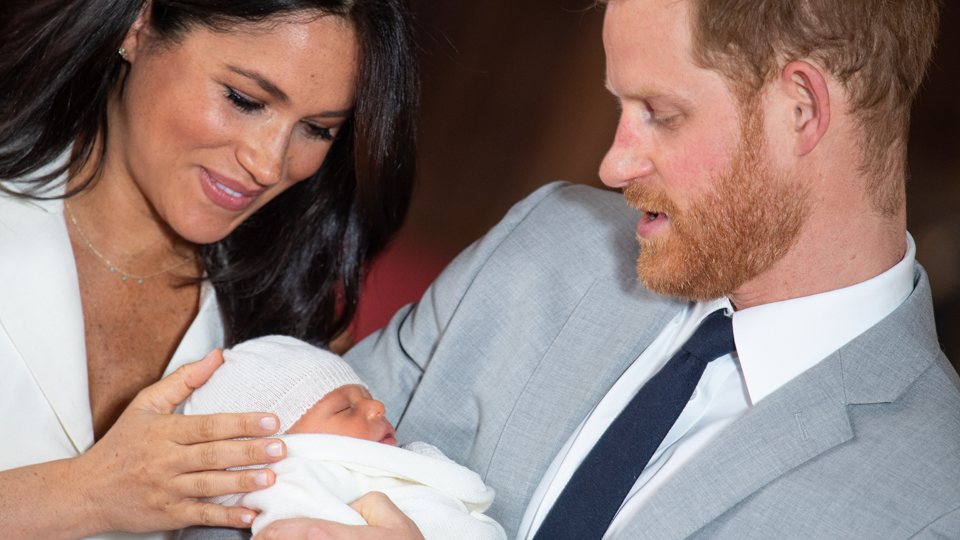 The Duke and Duchess of Sussex with son Archie Mountbatten-Windsor at Windsor Castle on May 8. Photo: Getty

Almost two weeks after his arrival, the birthplace of Prince Harry and Meghan Markle’s son Archie Harrison Windsor-Mountbatten has been revealed.

As was speculated at the time, Archie was born on May 6 at the private Portland Hospital in Westminster, according to his birth certificate, which was made public on Friday (UK time.)

Sarah Ferguson, Victoria Beckham and Amal Clooney welcomed their children at the exclusive hospital, which reportedly costs up to $28,000 for a maternity stay.

The birth certificate of Archie Harrison Mountbatten-Windsor, son of the Duke and Duchess of Sussex pic.twitter.com/9kvv7teEiB

A staffer from the Westminster Registrar’s Office made a home visit to the Duke and Duchess of Sussex at Frogmore Cottage so they didn’t have to do their administration in public.

Meghan’s occupation is listed as a ‘Princess of the United Kingdom’ on the document, as is her full legal name, Rachel Meghan Markle.

Harry and Meghan, who will celebrate their first wedding anniversary on Sunday, previously said they would not release Archie’s birth certificate but changed their minds in a week that saw other details of their private lives laid bare.

In January, questions were asked and eyebrows raised about why Meghan and Harry broke a two-year lease on a Cotswolds mansion and rapidly decamped back to Kensington Palace.

The couple rented the property just before their May 2018 wedding, and reportedly spent as much time as they could there, even “renovating and decorating” the estate, according to reports.

Perhaps the local gastro pub wasn’t to the Sussexes’ liking, sniped tabloids. Were the fields of wildflowers not organic enough for royal tastes, the house’s character-filled kitchen (surely with an Aga range) not right for Meghan to cook her famous proposal-night roast chicken?

As it turns out, Harry, 34, and Meghan, 37, moved out of the rural retreat after paparazzi agency Splash News chartered a helicopter to take aerial photos of the house.

The images, featuring views of “the living area and dining area of the home and directly into the bedroom”, were published by several outlets.

Harry – who stuck up for Meghan early in their relationship in 2016 by condemning “a wave of abuse” against her – again thought a line had been crossed.

The prince called in the lawyers against Splash News, claiming the photos’ publication “very seriously” undermined the Sussexes’ security and made living at the property impossible.

On Thursday (UK time) he was awarded “significant” damages and a public apology, a palace spokesperson told The Guardian. The money will go towards a charitable donation and Harry’s legal costs.

Prince William successfully sued a French magazine over the 2011 publication of topless photos of wife Kate Middleton, and Harry’s legal action is a sign of how fiercely the Sussexes will protect their family.

The decision to pursue legal action here very much sets the tone that The Sussexes won’t hesitate to take action in the future if they feel there is unjust intrusion into their family life https://t.co/y86x1aExIo

So where does this leave an adoring public when it comes to how often we’ll see and hear of Master Archie and his parents?

The pair surprised their Instagram followers by releasing a photo of Archie’s tiny bare feet on May 12, Meghan’s first Mother’s Day.

Paying tribute to all mothers today – past, present, mothers-to-be, and those lost but forever remembered. We honor and celebrate each and every one of you. Today is Mother’s Day in the United States, Canada, Australia, New Zealand, South Africa, Kenya, Japan, and several countries across Europe. This is the first Mother’s Day for The Duchess of Sussex. Quote from “lands” by @nayyirah.waheed: my mother was my first country; the first place i ever lived. Photo © SussexRoyal

It’s possible that the little boy won’t be seen again until his christening in the next couple of months, but his mother is widely tipped to clatter down the Mall in an open carriage for June 8’s Trooping the Color.

Meanwhile, behind closed doors at Frogmore Cottage at Windsor, Harry and Meghan have been receiving guests to coo over their boy.

Sans children, William and Kate dropped by on May 14 after engagements nearby. Archie’s grandfather Prince Charles and his wife, Camilla Parker-Bowles, reportedly visited on Thursday to meet the baby.

While guarding some details of his private life, Harry has been happy to talk about his son.

At the Barton Neighbourhood Centre in Oxford on May 14, mother-of-three Fatma Sheikh asked Harry how Archie is.

“He said he is doing well,” Mrs Sheikh said. “I asked him if Meghan was well and he said yes, she is fine.”

On the same day at Oxford’s Children Hospital, he talked parenthood with mother-of-two Amy Scullard.

“He said he’s getting used to the baby and how Archie has fitted into family life,” she said.

“He said he just feels part of the family and he can’t imagine life without his son.”

Meghan and Harry reveal Archie’s birthplace after weeks of speculation