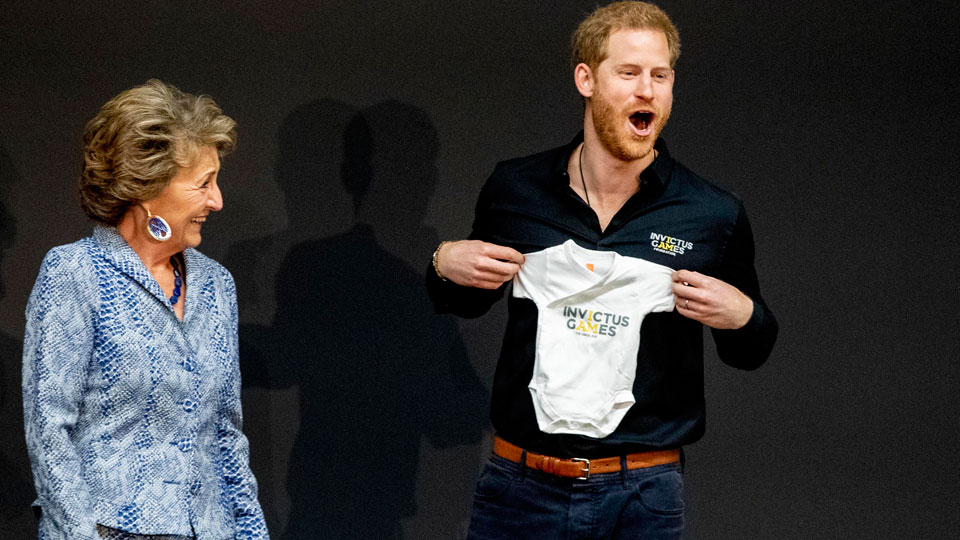 Prince Harry scores a onesie for Archie from Princess Margriet of The Netherlands on May 9. Photo: Getty

During an upbeat work trip to the Netherlands on Thursday (British time), Prince Harry couldn’t stop talking about his four-day-old son.

The new father was candid about everything from how Archie has “given him a new focus” to why he still badly misses his late mother Princess Diana.

But perhaps the most relatable anecdote Harry, 34, spilled was the story of his boy’s first day. Until now, the Sussexes have guarded details of Archie’s arrival.

And while Archie slept during his first photo call on May 8, seems that’s not always the case.

“He said [Archie] slept for the first 24 hours, like all babies do . . . and then he woke up,” Harry’s friend JJ Chalmers, a former Royal Marine, told People magazine.

The men have been friends since 2014 and met up in The Hague for the launch of the 2020 Invictus Games.

Harry had “a buzzing smile” from his new fatherhood high, Mr Chalmers said.

Harry also “lit up” about wife Meghan Markle, 37, saying “how proud he is” of her and chatting about what she was up to back at Windsor.

As well as wearing his heart on his sleeve, Harry wore his proudest title on his heart during the day trip.

His jacket was embroidered with ‘Invictus Family Daddy’, with a smaller message in yellow lettering: ‘I Am Daddy’.

Under the jacket, Harry wore a black shirt with the same messages on it.

Although it meant having to leave his wife and son behind at Frogmore Cottage, Harry was determined to break his unofficial paternity leave and kick off the year-long countdown to the next Invictus Games.

During a bike ride around the site with former soldier Dennis van der Stroon, 31, Harry had a conversation that was “amazing and emotional,” Mr van der Stroon said.

“Harry talked about how having a small child was his new focus and new goal,” said Mr van der Stroon.

“Above all he said he was just amazed by the miracles in the world.

“But he also told me … there’s no way you can plan for when the baby arrives.”

The two veterans – Harry served in the British army for 10 years – spoke about mothers as well as children.

“He said missing a mother is like missing some kind of security, how you need that as a son and it falls away when you lose your mother,” Mr van der Stroon said.

Archie will be rewarded for giving up daddy for the day. Harry was presented with a soft rattle toy, tiny ‘I love Daddy’ socks and an Invictus Games onesie.